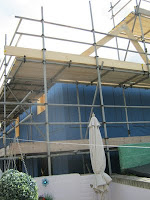 Following my August post 'Too close for comfort', the lady concerned, Tessa Finch from Kidwelly is persevering with her battle against the development overlooking and overshadowing her home and in fact, her life.
She has now contacted Carmarthenshire Council and stated that she is withholding her Council Tax payments until her property is re-valued to a Band A. She is prepared to fight this through the courts if necessary.
She holds Carmarthenshire's Planning and Enforcement department responsible for approving plans clearly at odds to the actual siting of the building. Further investigation by the department decided that it was 'in the right place' and that it was (with a spectacular example of buck passing) the Ordnance Survey maps which were wrong. Ms Finch suggests that, had the development been built on top of her home (which it very nearly is), obviously then they couldn’t argue that it should be allowed to continue as it was the fault of inaccuracies in the Ordnance Survey map!
She is currently trying to establish which senior planning officer was responsible for 'signing off' both the plans, and the enforcement decision.
All the best to Ms Finch.

In case you missed it here is Y Cneifiwr's take on last week's decision by Carmarthenshire's Planning Committee to grant permission for a large supermarket development in Newcastle Emlyn;
Big business - 1 small community - 0
Posted by caebrwyn at 19:38

Nobody likes the Council Tax, but I wouldn't recommend Ms. Finch lose the high ground by breaking the law herself.

It's very rare for an OS map to have such an innacuracy as appears to be claimed. I'm sure someone at the OS, if approached properly, would love to defend that organisation's work and provide comment...

Earlier this year a local businessman erected some fairly elaborate gates in an archway that forms part of a hotel he owns. The gates are now locked at night to prevent people from taking short cuts through the hotel grounds as they leave the pubs and make their way home.

The trouble is that the archway is a public right of way, and several members of the public complained to our Town Council, which then met in camera to discuss the issue. The Town Council then asked Carmarthenshire County Council for advice.

Some time - well a long time - passed, and it emerged that the council's own maps were wrong. The county council's records had the right of way running directly through the hotel building itself, rather than through the adjacent archway.

The result is that nothing will happen. The gates remain in place, and the real right of way is blocked.

Also within the last couple of years, it emerged that the County Council appears to have a very loose grip on what land it owns, and what belongs to other people. A chunk of land belonging to a playing field belonging to the local community was taken by the county council to build a home for the elderly. At the same time, it emerged that the county council had been charging our Town Council rent for buildings which, it turned out, it did not own - they belong to the town itself, not the county.

As far as I know, no compensation has been offered for the, well, illegal rent or for the mistaken and illegal landgrab.

You have to wonder how the county council would have reacted if the shoe had been on the other foot.

All of which is a long-winded way of saying that Ms Finch's problem is rather more likely to be the fault of the council than the OS map, but then as we know, Carmarthenshire County Council never, ever makes mistakes.

I received the decision on the enforcement visit today. I was not surprised that the development has been allowed to remain, but I was surprised that the officer who made the enforcement decision is the same officer who granted it planning permission in the first place (under "delegated powers"). The enforcement decision is highly flawed, including the officer's reference to a "material consideration" being a verbal account from the developers of an agreement they say they made with me. Which they didn't, by the way. But wouldn't you think the officer should have asked me about this, before reaching his decision? I have always been of the belief that the enforcement decision would be that the development would remain, and that it would just be a matter of how the breach was interpreted. The enforcement decision is that, as the development is further from my property than the plans showed (maybe 2 feet or so), the variations are "deemed to be within a reasonable range of tolerance". The word "positioning" in relation to the decision, which I had been informed would be a consideration of the enforcement decision, has been dropped. It is the positioning, not the distance, that has been my issue. So - next is a complaint to the Head of Planning, and the monitoring officer. However, I am not complaining just for the sake of it (I am extremely confident that the ombudsman will find in my favour, that the entire process has been seriously flawed. But what good'll that do me?) - I want the enforcement decision reviewed, and the developer required to apply for retrospective planning permission so that it can go before committee. I believe the officer who granted planning permission in the first place acted outside of his authority - per the CCC Code of Conduct re use of delegated powers - exceptions include changes in material circumstances between the outline and detailed application (in this particular case, the addition of another storey, and moving the proposed development right up to the curtilage of neighbours, even though they had objected about proximity on earlier plans where the development was a lot further away); also "where an objection on planning grounds has been received even though the power to approve has been delegated".