Good piece over on Jac o'the North's latest blog post on former Carmarthenshire chief executive and Private Eye's Shit of the Year 2016, Mark James, do have a read.

Jac provides a brief summary of some of the highlights of the dictator's reign at the council and, of course, his 'interests' elsewhere, none of which he bothered to declare when running the council.

You'll recall his failure to declare bugger all when being illegally bankrolled by the taxpayer for his legal fees, or his shadowy involvement in the now torpedoed Kuwait venture, or his companies in Cardiff, or his property portfolio, which I narrowly avoid joining every month by scratching together the 'gutter money' to put in his wallet...

Anyway, Jac focuses again on Mr James' property management dealings in Cardiff at the Century Wharf development. You may recall various posts from a couple of years ago. It seems that some residents are still taking a very close look at our Mr James, and so they should, and it's not an easy task as he abolished AGMs for the Right To Manage company he runs shortly after taking control. No surprises there.

They were, however, surprised to see that their phone services were provided by an unknown company in far-flung Llangennech called ETS Ltd. A brief look at Companies House shows us that, according to the last accounts, it was barely functioning, and, as Jac points out, there's a puzzling issue over the VAT registration number (see also the interesting comment from 'Brychan') All a bit odd until you see who runs ETS, it's one of Mr James' old friends, Mr Robert Lovering.
It's such a small world... 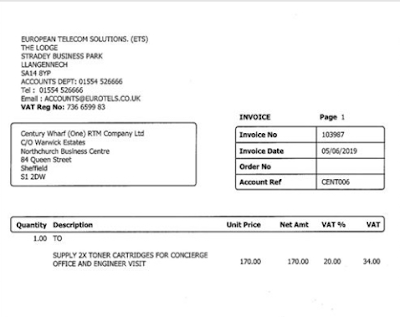 Going back a few years, around 2009, the MOD were selling their old site in Llangennech. Just before it went to auction Mr James decided to help out his friends Lovering and business partner and rugby bloke David Pickering by arranging for the council (never a problem for Mr James) to snap it up, and immediately selling it on to the businessmen.
Councillors were not told who was benefiting from this deal, only that they needn't worry as they were 'known to officers'. They certainly were.

He not only made sure they had a great bargain but then arranged a £281,000 grant to refurbish a couple of the buildings. My most recent post on the subject was in 2017 here. Cneifiwr's detailed piece from 2014 is here.

I guess if you wield power through intimidation and threats, and abolish all pretence at democracy, whether in business or public service, you can make these little arrangements, or, for that matter, destroy your critics.
Another word for it is corruption.

Lovering and Pickering, are also directors of Hydro Industries based in Llangennech, a water tech company. Expenses claim sheets show several unexplained trips made by Mr James to the Llangennech offices in late 2017 early 2018, a few weeks before both him and Marc Clement were publicly welcoming the company to the, erm, 'opportunities' presented by the City Deal and the Wellness Village...

The curious generosity shown by Mr James to another rugby entity, Scarlets Regional Ltd, is well documented on this blog.and one incident in particular is worth repeating as it shows just one example of what he was, and is, capable of if any of those Century Wharf residents happen to land on this blog. For the avoidance of doubt one could also add lying to the council, the court, the police and the press to his extensive portfolio.

To cut a long story short, with mounting debts, the rugby club wanted to sell a 'surplus' car park to Marstons Inns but Scarlets Regional Ltd were leaseholders, the council owned the land.

The recommendation, from the Council's former Director of Finance was, in no uncertain terms, for a 50/50 split of the £850,000 proceeds, possibly even erring in favour of the council.

Mr James was having none of it. His rugby business cronies had a third party debt that needed repaying and he was determined to help them out. At the last minute he made damn sure the company had an extra £200k out of the deal, shamelessly shortchanging the taxpayer.

Incidentally I finally got to the bottom of this crooked deal when Mr James was on 'gardening leave' during his previous encounter with plod in 2014. Possibly thinking that he wasn't coming back, the council released, under FOI, some very interesting emails which set out this sorry saga and the contempt James had for close colleagues, let alone the public.

Century Wharf residents, or even anyone thinking of using the services of Ffynnon Consultancy, might want to go even further back and read what he got up to in Boston... It might help explain his modus operandi.
He also quietly changed the council's Constitution to illegally use public money to sue for libel, establishing his very own slush fund, something the residents may want to watch out for...

The Century Wharf residents who complained a couple of years ago, and committed the gravest of sins by not only criticising him but contacting the press to boot, were described by the charming Mr James as a 'cancer'. Funnily enough, one of their concerns at the time, apart from the vomit in the corridors, was the bullying tactics of Mr James as Chair of the Board to silence dissent, and the suspicion he was creating his own companies, or through his acquaintances, to benefit from work at Century Wharf.

If anyone riddled Carmarthenshire Council with disease and corruption it was Mr James himself, and extended it to everything he touched, the legal department, recruitment and press office in particular spring to mind.
The City Deal, and particularity the Wellness scandal and the shady Kuwait deal were his parting shots. The sorry saga is documented throughout this blog, including using his own personal lawyers, Acuity Law, to 'clear' his and the council tracks.
He'd already trashed the reputation of the council with his illegal indemnity and tax avoidance scandals and this was the icing on the cake.

He nearly brought the Deal to its knees by attempting to extend his dictatorship, through plain old dishonesty and self-interest to a bigger, and possibly wiser audience who, in the end, were having none of it.
I have no doubt that the only pockets Mark James was interested in was his own, and those of his like-minded friends. As we know, thanks to the determination of Swansea University, and no thanks to the impotence of carmarthenshire council, the police became involved in the Wellness scandal, with raids last year on several homes, including that of Mr James. County Hall was also searched, for deleted data.
As far as I know, the criminal investigation continues.

Mr James managed to control Carmarthenshire Council through fear, dishonesty and manipulation, to the extent that they allowed this crook, and thoroughly nasty piece of work to trample on democracy, funnel away precious funds and bully, threaten and terrorise staff and Members for seventeen years. 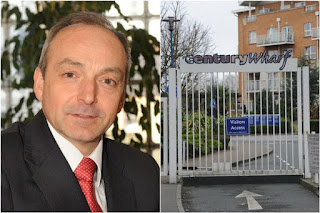