Century Wharf - a forged signature, and the cladding scandal

Since the Grenfell tragedy in 2017, cladding inspections have been required for all high rise residential buildings in the UK. The UK government provided cash to replace the flammable cladding in England, although this has now run out, but the Welsh Government only provided money for publicly owned buildings, not those in private ownership.
In Wales, many of these flats are in leasehold ownership and residents have found that without the proper certification that the cladding is ok (an EWS1 form), they are impossible to either sell, or to obtain a mortgage to buy one. It's left swathes of modern developments pretty much worthless whilst the developers, management companies and residents argue over cost and responsibility.
In most cases it seems that the leaseholders' are being expected to pick up the cost. Plenty of detailed background information can be found online, the hashtag #endourcladdingscandal is particularly informative.
Some unscrupulous individuals have found ways to cash in on the scandal, and at Century Wharf, Cardiff, a forged signature on a EWS1 form has been discovered. There appeared to be more than one. We know, of course that former CEO Mark James just happens to control the Right To Manage (RTM) company at Century Wharf. 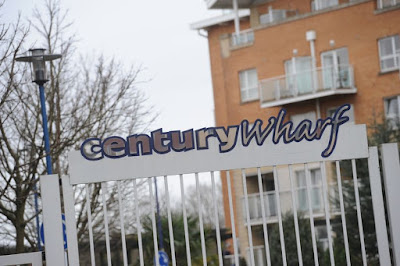 As the Western Mail reports, a concerned resident and retired police officer Gareth Griffiths grew suspicious and contacted the surveyor who had 'signed' the form only to be told that she knew nothing about it whatsoever, she had not signed the form, inspected the building, nor had any contact with the company contracted to carry out the fire safety survey.
His actions saved the residents over £100k in fees for fraudulent certification, though still left the uncertainty over the cladding. Mr Griffiths was also instrumental back in 2017 highlighting the problems caused by poor management and Airbnb guests.
At the time, Mr James, who, by the way, had not declared any of his business interests to his employers, called those who raised concerns, like Mr Griffiths, a 'cancer'.
The company which manages the flats, Warwick Estates Ltd had contracted Specialist Facade Inspections Ltd (SFI Ltd) to carry out the certification. SFI Ltd have claimed that the third party surveyors they used to sign off the forms are to blame, although they don't identify who that was exactly. They are, however, adamant that they're not at fault.
An investigation is ongoing, and presumably the police are now involved.
Warwick Estates have yet to provide a statement on the issue and neither, it seems, has the RTM company Chaired by Mr James, who also owns property at Century Wharf.
It is, of course, early days but one wonders whether Mr James, or Warwick Estates are being particularly co-operative with the investigations, or not. It was surely the role of the RTM to provide oversight and represent the leaseholders' interests, yet, if it wasn't for Mr Griffiths they'd have flushed £100k down the toilet.
As I said in my previous post on Century Wharf, which dealt with Mr James' use of his business friends to supply telephony services, he got rid of AGMs for the RTM company and, according to sources, runs it with the same charm and hubris that he did at the Council for seventeen years.
I'm not suggesting for one moment that Mr James is somehow involved with forged documents...despite his history at Boston council, let alone his history at Carmarthenshire Council, nor that any of his business acquaintances are involved, nor even his own building inspection company or consultancy firm....
What I would say is that, the latest scandal aside, the RTM company would be well shot of Mr James. He spent seventeen years plundering the council, bullying, lying and manipulating his way to favour his friends and silence his critics. He used public resources to further his own interests and private vendettas, and has been investigated by the police more than once, with one investigation, relating to fraud and bribery, currently ongoing.
He's a crook.
What is pretty clear, so far, is that in this case, the management fell very short of acting with a duty of care and due diligence, and with SFI Ltd claiming so strongly that they are in fact the victims, it seems there's still some way to go with this.
(Later post, December 2020; Century Wharf - Mark James' take-over bid)
Posted by caebrwyn at 14:53

Great reporting Jacqui, glad to see you still going on

Whoever was responsible for arranging this false signature should be SEVERELY punished.
Follow it through to the bitter end NO IFS NO BUTS.

Rumours are circulating that Building Estate Solutions Today Ltd, as mentioned in the main post above, and of which Mark James is a director, is now actively touting for business across various sites down the Bay.
Naturally, Mr James would never miss an opportunity to cash in on the misery of others...
Rumour also has it that another firm of surveyors is now active at Century Wharf, one of the directors of that company is also a director of yet another company, Ellamel Holdings Ltd, alongside none other than Marc Clement, sacked from Swansea Uni for gross misconduct over the Wellness scandal.
Both Mark James and Marc Clement form part of the police investigation into fraud and corruption over the Wellness tender.
Such a small world...