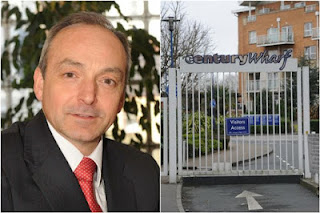 I cannot understand why leaseholders have not exercised their "right to manage" to throw the shyster out - or is it only in England we can do that? Scotland has no leaseholders whatsoever - everyone gets a flat freehold and pays only for communal services. Time to stamp out these inequities and chances for chancers to exploit people.

@Redhead
Sounds like Scotland has a much better system.
As per my post, there is a Right To Manage company at Century Wharf. The shyster, Mark James, is the Chair. He's been a director since 2014. He's been a shyster a lot longer than that.

I guess the leaseholders can't fire him then? Teflon Mark!

This slimeball has poisoned the legal pracice of Carmarthenshire County Council and his underling still surviving; sits with the slime stuck all over him.