Carmarthenshire Council and the Picton problem

After the death of George Floyd earlier this year, the BLM movement, and the subsequent controversy over statues, most notably the toppling of Colston into the murky depths of the Bristol dockside, Carms council pondered over what to do about the Picton Memorial, Carmarthen, and Picton's portrait hanging in the old courthouse.
The pondering only occurred because there was a petition to rename the monuments with over 14,000 signatures. 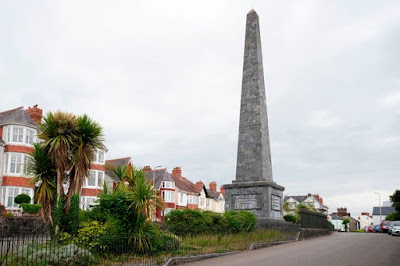 Sir Thomas Picton was a soldier who met his end at the battle of Waterloo.
Unfortunately he was also deeply involved in the lucrative slave trade and in 1797 became the brutal and corrupt Governor of Trinidad, if that wasn’t bad enough, he also approved the illegal torture of a 14 year old girl called Louisa Calderon, and was accused of executing at least dozen slaves.
Further details of the horrors he meted out were uncovered by civil rights campaigner Khafra Kambon, and featured in this BBC article from 2007. 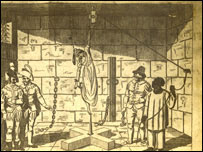 Detecting some, erm, heavily polarised online opinions over the issue, the council thought it safer to consult the public, who could then blame each other rather than our illustrious exec board. They could call it democracy.
The 14,000 name petition was ignored.
Cardiff Council, on the other hand, voted to remove his statue from Cardiff City Hall's 'Welsh heroes' gallery in July.
Public opinion was hotly divided, with the ‘where does it end?’ pro-Picton camp, led by such, er, luminaries as Neil Hamilton, winning the day against, well, those seeking eternal justice for victims of Picton, the ‘snowflakes’, apparently. So it seems that both the memorial and portrait are here to stay. After all the man was, apparently, a war hero, as well as a serial abuser and torturer of little girls.
The Plaid Cymru Exec Board decided after much pontification-via-zoom, and the useful passage of time since the initial furore, to just add QR codes and ‘information boards’ so that curious observers could find out the truth about Mr Picton for themselves, if they could be bothered, or could get online.
It’s a bit like keeping a memorial to Jimmy Savile because he was once a popular tv presenter and fundraiser, with the ghastly truth only available down the other end of a wobbly phone line or a faded sign.
And why Picton's portrait should still grace a building once dedicated to handing out ‘justice’, rather than being binned, is a mystery. 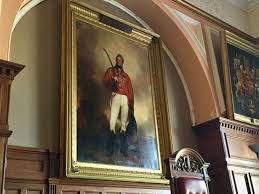 Anyway, I daresay the issue of cold hard cash played its part, an info board and QR codes will cost around £5000, demolishing the huge obelisk would have added at least a nought, probably two.
Rededicating could have posed even more dilemmas, the obvious choice, I would have thought, would be in memory of Louisa Calderon and the unfortunate souls of Trinidad. But no doubt Emlyn would prefer a more recent hero of his, Mr Mark James CBE, not quite a Sir, and maybe not a CBE for much longer, but close enough for Emlyn...The problem is that it would require an even bigger info board and QR thing to explain that Mr James is in fact, also a bully, also corrupt, and a liar and a crook to boot. And of course, Mr James is very much alive, and currently conning the unsuspecting folk of Century Wharf from the safety of his Carmarthen residence.
In all seriousness, removing or rededicating the memorial would not be 'changing or erasing history', it would be recognising the fact that Picton was a cruel bully and doesn't exactly deserve veneration. Politics has nothing to do with it.
Just as well he's not alive today, they'd probably make him Leader of the Council.
Anyway that’s the end of Carmarthen's Picton saga, for now, after all, historical accuracy and truth is not something Carms Council readily signs up for.
So it’s a happy new year from me, I will ensure that 2021 brings justice, truth, and accountability.
Posted by caebrwyn at 13:04

Not surprising Carms Council's Exec Board took the measures they did to opt out of responsibility. They have a history of blotting out/burying colleagues lies which damage unsuspecting members of the public. Mark James former CEO - Linda Jones Monitoring Officer -
and the Reverend Emlyn Dole Leader who leaves his Christian beliefs behind in his chapel on Sundays & wears another not so christian cloak Monday to Friday. That's to name but a few.

Historical monuments should be left alone .I wonder what one bend a kneesers will want to do with Picton and Picton Castle.

@Keanjo
As I said, opinions are very divided! However, I don't think there's a problem with Picton Castle, as the health board quickly made clear. It is unrelated to the slave trader and was named 500 years before he was born. It is thought that the castle's name comes from a combination of the old English words for hill and settlement.

We cannot deny what he did, but we cannot deny history either. To suggest he was a torturer of little girls is rather stretching the truth. What about the good things he accomplished? Same as Coulson; examine the facts there too.

To remove the monument would remove history, which after all has shaped what we are now. Ask yourself, why the monument was erected in the first place and by who.

Maybe then you will understand.

@Anon 16:30
This description from the Museum of Wales sets the historical context, and provides an interesting comment with regards to the 'shaping of who we are';

"public memorials, though built to remember, are often designed to forget. And that which has been forgotten in the glorification of individuals like Thomas Picton is the violence and atrocities of our colonial past."

It's also true that the fact that we chose to venerate _those_ kind of people is revealing a historical fact in its own right. Which is why I favour the 'brutally honest interpretation plaque' approach to these memorials.