Wellness scandal - how did it happen?

I know I have cover the events concerning the tender for the Wellness village many times but, looking back, it's one of those things, and there have been quite a few, which makes one think, wtf, how did that happen? Or, more to the point, how on earth was it allowed to happen?
The project has gone from one bizarre 'artists impression' back in 2018, 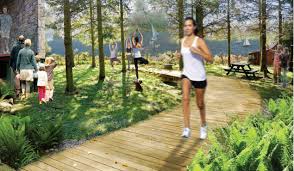 to another. The latest 'vision', now rebranded as Pentre Awel, resembles somewhere one might stay at Her Majesty's Pleasure. Surrounded by a toxic swamp. 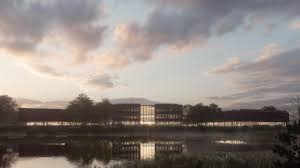 Back in May 2016, the Executive Board were treated, behind closed doors, to a presentation on the project. Mark James, along with his mate from Swansea Uni Marc Clement, and Franz Dickmann led the show. Dickmann, at that point, was a director of Kent Neuroscience Ltd (KNS). Clement had resigned as a director the previous year.
The Exec Board was of course, like putty in their hands, and easily dazzled. It was a piece of cake, and the minutes from the meeting state that they were told the company had "a proven track record for similar developments within the health, medicine and wellness sector".
What they omitted to say, and a brief check would have shown this up, was that this "track record" was the development of a private hospital in Kent which now required a £20m bail out with the Dickmanns' hastily shedding their directorships.
The purpose of the meeting was for the council, ie Mark James, to 'arrange' a cosy twelve month 'exclusivity agreement' for KNS to develop the £200m Wellness Village, no questions asked. And certainly no tender.
During the following twelve months, KNS eventually and inevitably, given their history, dissolved and so the agreement quietly fizzled out. It seemed to everyone, apart from Mark James, that a new developer would have to be found. That, of course, was not part of Mr James plan, nor, might I suggest, part of his end of the deal with Dickmann and Clement.
There were now vested interests, the Dickmann clan would be running and profiting from everything from the Creche to the consultancy (James Dickmann's MedParc), he had, allegedly, been offering 'inducements', jobs, shares and property. Clement was lining himself up to run the Wellness hotel. Mark James, as we know, was already quietly and heavily moonlighting in the property management business.
There was also a neat little sideline for them all brewing away in Kuwait.
All for personal gain, and all with the help of City Deal and Council cash.
Lo and behold in 2018, and £137,000 in debt, Sterling Health Security Holdings Ltd were announced as the 'new' partners. There had been, apparently, some sort of tender but oddly they were the only bidders. The tender process was overseen by Mark James, who made sure it ran according to his plan. 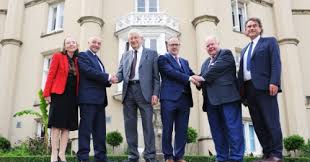 It was immediately apparent that this was the same outfit. The Dickmanns. Now with Mr James' pet puppet Cllr Meryl Gravell on the Board. The Dickmanns were also insisting that Vinci Construction were to build the project. It was all sewn up, promises had been made and clearly had to be kept. 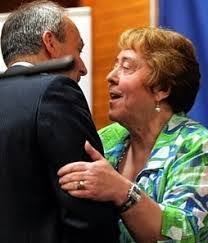 Mark and Meryl
And to be honest there wasn't a proper tender process in sight.
Anyone who raised doubt as to the validity of the process, or due diligence, or whether it was all a bit corrupt was immediately shot down in flames by both Mark James and loyal Emlyn. Anyone who raised a concern was accused of jeopardizing the future of Carmarthenshire, in reality it was jeopardizing the size of a few wallets.
All was going swimmingly. Unfortunately, with the involvement of the City Deal, this little arrangement went wider than the closed shop of the council run by Mark James. He, and they, were rumbled. He soon announced his resignation.
Not only were other partners incredulous and horrified with his 'leadership' of the City Deal, but, by the end of 2018, with the diligent persistence of others at Swansea University, (and this blog) the Wellness scam and all those involved in the tangled web, were finally exposed. The police raided several homes including County Hall, in July 2019, eight suspects were interviewed earlier this year (we know who they are), and the CPS are now involved.
Let's hope 2021 bring a result. 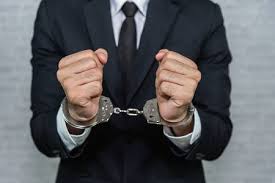 * * * *
With the New Year Honours list announced I am reminded of a distinctly unworthy recipient of an award back in 2012, namely Mr Mark James and his CBE. Who decided to nominate him remains a mystery, possibly his adoring fan and co-conspirator former Councillor Meryl Gravell, who knows. The honour of being made the Rotten Borough's Shit of the Year 2016 by Private Eye was far more fitting.
He was made a CBE a couple of weeks before ensuring he was illegally bankrolled by Ms Gravell and the Exec Board, to bring his tactical counterclaim, and scupper a settlement which was on the verge of completion. At that meeting, in which he remained, illegally, he promised, in writing, to hand over any damages back to the council should he win.
As you know, my use of the term slush fund, which it was, and my description of Mr James as Pinocchio, a liar, which he was, and is, earned him £25,000 in damages.
Anyway, as he enforced the court Order, ultimately gaining a suspended order for sale, the costs rose to around £46,000 plus 8% interest, which I am now struggling to pay at £165 a month.
At the Order for sale hearing, early in 2017, the fact that he had breached the written undertaking, to his employers, and the taxpayers, to hand over any damages back to the council became apparent. It could go in the nearest gutter if he so chose. It was going back in his pocket rather than yours. The judge was far from impressed.
Although it was the Labour/Independent administration in power during the original trial etc, by 2015, Plaid Cymru were now in the hot seat. They had, of course, been thoroughly opposed to the whole thing when in opposition. But things had changed, hadn't they, 'two barns' Emlyn?
The news that Mr James had reneged on his promise to hand over the damages brought comments from both Labour and Plaid politicians, not that Mr James gave a rats a**e. Nia Griffith, Labour MP for Llanelli spoke about 'moral obligations' and 'doing the honourable thing'.
Jonathan Edwards, the Plaid MP (currently sitting as an independent) gave an interesting comment, given where we are today.
He said "A new Plaid Cymru administration would never follow Labour and allow such an event to stain the name of Carmarthenshire again"
Of course, as I have pointed out, Plaid Cymru have made sure the door is left wide open to do exactly the same thing again.
The unlawful clause which allowed the illegal funding for criminal mastermind Mr James has, via the appalling, shameless, and deliberately misleading advice from head of legal Linda Rees Jones, merely been moved from one section of the constitution to the other.
This ongoing nonsense, unique to this council, is simply to avoid the stark fact that she and Mr James were wrong and acted illegally.
Yet another wtf' moment.
Given the Auditor General's rejections of the council's arguments for reinstating the clause, I have written to him about their decision to do exactly that, back in November, and await a reply.
If Adam Price wants to lead a Plaid Cymru Welsh Government in May, he needs to rein in this Plaid run council.
Posted by caebrwyn at 18:36

The Police have an appalling record in being able to understand and prosecute fraud. The more time that passes sadly leads me to fear that they will end up concluding insufficient evidence etc. It would be a tragedy if my fears materialise.
On a side note , whilst fully recognising the impact of this blog and others at the University, there are several regional leaders, political and officer who have consistently refused to work with James for years, unfortunately those politicians in power locally and nationally failed to act.


How did it happen? - reflects to me the current pandemic and its scandalous management by a narcisstic leader and sycophantic cabinet members

No different then to Carmarthenshire - Mark James and his followers

It becomes obvious how it happens. Just look back at how the many whistleblowers and complainants have been treated over the years of Mark James rule, and thrown to the wolves for trying to ask the questions that needed to be asked, attempted to expose maladministration in order to reach honest and fair decisions and conclusions. Add in the weak councillors who simply can't be bothered, with the attitude 'nothing to do with me guv'. Sadly this council is morally bankrupt and those that suffer are the honest Joes, never those that deserve to and should!. We all thought a new broom would sweep away the toxic culture left by the heinous Mark James, comparable to Trump, but not so.


Agree with Anos. 9.25 - the shoe in CEO is unlikley to provide any new impact on the Council being the stand in candidate of Mark James
No doubt reporting to him on a regular basis
There is little past experience there or a wider experience of being a CEO - unfortunately the Council will be stuck in a rut for many years to come

Anon 18:58
I share your fears, but live in hope, and the combined efforts of three police forces. I understand that the matter is now with the CPS and their initial response is awaited. I also understand that there was one arrest earlier last year though as the individual wasn't charged he cannot be named. Yet.

As for your side note, I was also aware, over the years of the unpopularity, to put it mildly, of James with various senior politicians and officers alike. It was indeed a pity they didn't act. In the end it was me who faced him in court. Unfortunately they watched on silently as I got stuffed. Their contribution would have made a world of difference.
Though, as far as I'm concerned, it's far from over.

Anon 09:25 and 10:45
Agreed. With his protege promoted to the top job, aided by the sycophantic Emlyn Dole, James' poisoned legacy will continue for years to come. He got away with every despicable, illegal, trick in the book, built on a climate of fear, manipulation and indifference.
However, the mighty do fall, and he definitely will. I'll make damn sure of that