Following the scathing UK government and Pembrokeshire-led internal governance reports on the City Deal, Carmarthenshire Council has now been stripped of the entire democratic governance and audit function.
These functions will be taken over by Swansea and Pembrokeshire Councils respectively.
This is a damning indictment of Mark James' role as 'principal advisor' and 'responsible officer' and the end of Linda Rees Jones' role as City Deal Monitoring Officer. The toxic culture of governance and democracy, Mark James-style has been, predictably, rejected and, short of his arrest, it's a fitting end to his seventeen year regime.

This week's Carmarthenshire Herald has a good write up of last week's Joint Committee meeting of the Swansea City Deal. Following those damning governance reports, of which Mark James was the prime suspect, Carmarthenshire is being squeezed out of the game. Apparently a bid was made to move the Regional Office from Carmarthen to Swansea Council but it seems Emlyn Dole threatened to pull Carmarthenshire out of the entire Deal if that went ahead.

The Herald surmises that the Rev 'two barns' Dole was emboldened by Mr James' recent instructions that the council could build the Wellness Village themselves, and burden the taxpayer for future generations, without all that pesky scrutiny of course.... Incidentally, the Wellness Village was discussed at Monday's Exec Board, behind closed doors, despite the wider calls for urgent transparency, and the catalogue of scandal. A plan B perhaps? It would be a foolhardy investor indeed who put their cash into a scandal-ridden project with no planning permission and a police investigation hanging over it. Or maybe they've bought some magic beans and are hoping for the best...

There was no mention at the Exec Board meeting of the £109,000 overspend on legal bills for the Wellness dream, a tidy sum which might have helped one or two of those struggling primary schools they were talking about, but anyway, no doubt Mr James' personal solicitors Acuity Law have done quite nicely out of it thank you.
Anyway, last week's Joint Committee decided, in the end, that the Regional Office will be centred at the Beacon, Llanelli but with pop-up offices in the other counties.

However, as I said above, thanks to Mr James, the 'responsible officer' for governance, Carmarthenshire has been stripped of its responsibility for governance and audit.

The Herald, in it's inimitable way, mentions that Mark James has been absent from the last couple of City Deal meetings, (chickened out and hid, in fact) and last week, he missed, sadly, the 'ringing endorsement' of the shocking governance reports by the chair of ABMU health board (now Swansea Bay UHB) Andrew Davies. With Mr James own attack on one of the partners a couple of weeks ago and the legal spat between him and Andrew Davies (see here, and my update in the comment section), to say he's unpopular with other partners would be an understatement.

As the Herald says, "It's no secret that a number of other City Deal partners have had little time for the departing Carmarthenshire CEO". 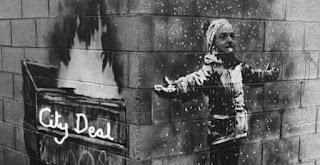 With the axing of his role of Lead Chief Executive, if Mr James wasn't conveniently retiring, he'd have been sacked. And he knew it.
Mind you, as Jac o'the North points out today, rather than take up some innocent retirement pastime like counting his money or evicting bloggers, he has a fully-conditioned Emlyn Dole, and protegé Wendy Walters waiting in the wings....and, with his newly formed consultancy company all ready and waiting, one wonders if Mr James malign influence is far from over and will continue for many years to come...

Putting aside Mr James' arrogance, dishonesty and general poor character for a moment, its worth remembering how we got to where we are. I say we because the City Deal is supposed to benefit the entire region. The disastrous Wellness scandal did have one silver lining, and that was to force something of a rethink of funding such pocket-lining vanity projects. There is now talk of an improved transport network, which is perhaps, a start. Once the current mess has been untangled.

The scandals and allegations over the past few months (all on this blog) are all related to the Wellness project and Franz Dickmann of Sterling Health in one way or another. Added to that we have the Kuwait venture. All involve Mark James. All linked, and all suggesting self-interest (share offers, job roles, discounted houses, etc) rather than public good. The Swansea Uni allegations are hotly denied, although grievance letters from Prof Marc Clement and Vice Chancellor Richard Davies have recently been thrown out by, it is understood, the independent QC brought in to investigate the allegations.
Furthermore, both South Wales and Dyfed Powys Police forces have been investigating since March.

The scandals surrounding the Wellness Village, Sterling etc continues with yet another suspension at Swansea Uni last week. Reported by the Western Mail, though not online, Dr Gerry Ronan, a former director of the commercial spin-off company Swansea Innovations Ltd has, it is understood, been suspended over allegations relating to the Wellness project and email correspondence to former Economy Minister and AM Edwina Hart and the Wales EU funding office, and for revealing information to others, no further details are available yet.

As I have mentioned many times, in my opinion Mark James' involvement goes a lot deeper than a few casual lies to the council and the City Deal board. His priority, as we have seen over the years, is, well, none other than Mark James, a keen advocate of self-promotion, personal enrichment and tax avoidance, and as for 'democratic governance', the warning signs have been there all along.

There is only one reason why Mr James was so insistent that Dickmann's companies, Kent Neurosciences and then Sterling Health were signed up by the council to develop the project, even with bail outs, company dissolutions, debts and no proven track record....I don't need to spell it out surely? He was even plugging the virtues of Sterling when his own officers were having serious doubts about the outfit. Eventually, they were ditched. 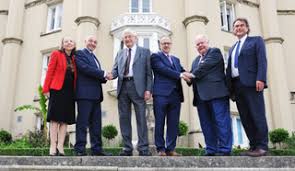 To cap it all, Sterling, Mr James and the suspended Uni employees were all involved in the shady Kuwaiti venture, something Mr James didn't bother to declare as a registered interest despite this private enterprise potentially exposing Carmarthenshire Council to financial risk. He has also omitted to declare his own long-running private business interests. 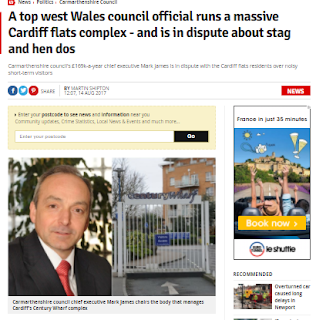 I am of the view, and I'm not alone, that Mr James' behaviour in relation to the City Deal has been dishonest, arrogant, manipulative and secretive; reflecting his management of the council. I am also of the view that he should be criminally investigated.
And, as I have made clear in previous posts, that investigation should not just be confined to his role in the Wellness scandal. 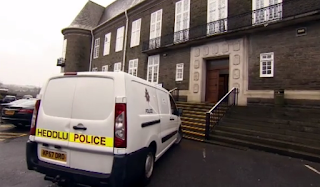 For further background, please search this blog
Posted by caebrwyn at 07:23


Your pursuit and the evidence you are continually uncovering against Mark James leaves me absolutely aghast in the legal system pertaining to Welsh governance. You surely hava watertight case for full reimbursement with costs against James and Carmarthenshire Constabulary and a quashing of the high court decision which was funded illegally by the ccouncil. If a full investigation is carried out I have a pleasent vision of James and Dole sharing a cell in Strangewaays or some other suitable retirement abode.

As the retiring CEO of Carmarthen Council rides out on his gilded unicorn, the people of Carmarthen can only hope that his democratically appointed replacement will have not been unduly influenced by his unaccountable and opaque influence in the way he has controlled the council during his tenure. She has now the opportunity to ensure a complete change of culture that has been so much in evidence during the reign of M.V.James.We must hope that the councillors of all political persuasion are at long last able to focus their time and energy on acting for the benefit of the communities that have elected them to office, rather than dancing to the tune of an autocratic CEO. It may well be too late for many to change but with the "influence of The Rev.Dole", who knows what the future holds!

Well, it all depends on whether Dole and pals have any planning applications they need to see through, I guedd!

City & County of Swansea are playing a very crafty game. For at least a year an experience development company with expertise in delivering Wellness Centres in the North West of England (3 completed and operating) has been talking to the Council about providing a Wellness Centre located on the A 48 between J46 and J 47 M4. This project has the advantage of being close to and capable of being linked in to Morriston Hospital. Oh yes, and the other advantage is that this Wellness Centre will be entirely privately funded WITH NO FUNDING REQUIRED FROM THE COUNCIL OR THE BRO MORGANWG HEALTH AUTHORITY. I suspect that Delta Lakes Wellness Centre is a non-starter, even with a couple of hundred million chucked in by the public sector.

Has'He who must be obeyed' gone yet?

It's a great pity that the Leader Rev Dole, who preaches Christianity but doesn't live his own life by it's values, hasn't also gone. A most deceitful dishonest man coached by the infamous Mark James, has a lot to answer for. Will this council now be open and transparent while Dole carries the legacy left by the megalomaniac just departed?

@Anon 15:26
The departed megalomaniac also professes to be a devout Christian. The hypocrisy is sickening.

'Hypocrisy is the contrivance of a false appearance of virtue or goodness, while concealing real character or inclinations, especially with respect to religious and moral beliefs;'

How apt for both of these immoral individuals. To be pretending to be Christian when in fact what they actually exude is wickedness. Ethics, morals, integrity and above all honesty is something neither possess.