I've noticed that the Executive Board portfolio for 'Modernising Local Government' has disappeared from the new list of 'responsibilities'. You may remember that this title was previously, and astonishingly, held by the leader of the Independent Party, Cllr Pam Palmer who's little foray into the world of twitter was as memorable as her comments prior to my arrest in June 2011; "I think there are rules about people filming children" she said, as I attempted to film a council meeting with the average age of Members at around 70 and not a child in sight.

Leader of the Council, Kevin Madge has made his morbid fear of twitter publicly known, and I'm sure Meryl's brief encounter with You Tube has left her feeling similarly panic stricken. So, perhaps it's not surprising that the portfolio has been quietly dropped along with modernising Carmarthenshire Council generally.


It was as recently as January that I witnessed the (not uncommon) sight of Cllr Palmer glaring at Cllr Caiach for suggesting that existing audio equipment could be used to record meetings. Clearly concerned that her tones would be forever immortalised on tape she vowed she'd never agree if it cost 'one penny' on the budget. All this perhaps explains the venomous tone of the 'webcasting pilot' recommendation included in the 'Forward Work Programme', the title and contents of which, by anyone's standards, should be questioned under the Trades Description Act (or is it the Advertising Standards Authority, either will do).

Other councils, as we know, take a slightly more open attitude to sharing information and welcoming the public. A Shropshire Council recently discussed publishing councillors business connections, spending details over £100, members of the public filming meetings, public question time, etc etc. In comparison, and to give an example, Carmarthenshire council has even removed the allowance search for individual councillors from their website.

As for spending details, our council prides itself in publishing absolutely nothing unless persuaded by determined  FoI requesters. The chance, therefore, to inspect the accounts is an opportunity not to be missed. I hope, by the time several of us arrive at County Hall on Monday, the ledgers are already well-thumbed by concerned taxpayers. 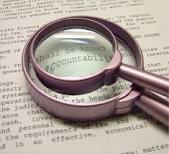 But as is usual with our council, nothing is quite so straightforward. I contacted the Accounts department a couple of weeks ago to book our slot in the dungeons on Jail Hill. That was fine, said the very helpful lady I initially spoke to, yes, she could find a suitable room to accommodate several people and would also be very grateful for a list of specific areas we'd like to look at so as they could 'prepare' the necessary material for our convenience.

I duly emailed our list and received a pleasant acknowledgement on Wednesday; "thank you for the list of specific areas etc which will enable us to do some preparatory work and save time on Monday". Oh good.
By Friday however, alarm bells had seemingly rung somewhere in County Hall and a lengthy email arrived saying that due to the current system of accounting, it would be impossible to provide the material I had asked for. Oh dear.

I am fully aware of the enormous budget handled by the council and I am sure their systems are highly complex but is this 'public inspection' only suitable for expert auditors and trained accountants? Was it the contents of the list? Or was it the thought of several unnamed individuals, one of whom is a trained auditor, in the company of Caebrwyn, rifling through the files which is causing difficulties?

In addition to this change of heart was the sudden demand, on Friday, for a list of the names of those who would be attending. I had already given my name of course. This request was repeated later in the day in a brusque email from the head of service.  I felt a response to this was unnecessary as not only will we be, undoubtedly, required to 'sign in' on Monday and possibly sign-up to the Carmarthenshire Council Official Secrets Act, but our mugshots will be filmed by the cameras in Reception.

I'll let you know how we get on.

Good luck for tomorrow, Caebrwyn: I imagine that a big box of black marker pens has been borrowed from Barnet Council especially for your visit. Here in Barnet we are not accepting this clear obstruction of the law and intend to pursue our legal right as far as we need to.

Lets get ready to rumble!!!