To anyone who has ever met either myself or fellow blogger Y Cneifiwr, 'militant and extremist' are probably the last words to spring to mind; 'anoraks' being far more likely. The blogs, whether you like them or not are hardly the stuff of guerilla cyber-warfare by any stretch of the imagination.

I was reminded by Cneifiwr's recent post about councillors' access to certain blogs being blocked, of a Freedom of Information request I made in April 2011. I had heard similar reports that, as usual, councillors were having great difficulty in reading any opinion which varied to that of the Department of Spin. At the time, if the plucky Member managed to get past the sirens and warnings that visiting the blog may impair their minds and corrupt their souls, their visit would be logged and monitored for posterity. There is clearly still a problem.

The Council sent me a list of categories under which headings, sites are blocked by council policy. By a process of elimination, and as neither blogger is a 'botnet', a 'phisher', an illegal arms trader, nor a distributor of pornography, there is only one category left;

"Militancy and Extremist - Sites that offer information about or promote or are sponsored by
groups advocating antigovernment beliefs or action."

Anti-government? Of course this is perfectly in line with the frequently trotted out sentiment, from the highest level, that critics of Carmarthenshire Council are somehow opposed to the whole concept of local government. I suppose that notorious organ of anarchy, the South Wales Guardian now comes under the same category......

The truth is, of course, that the criticism is about the way it's being run, again at the highest level. Yesterday's post said it all. 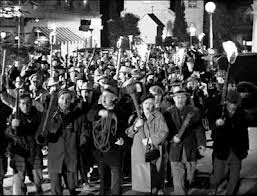 The deafening silence from our own Welsh Government is a clear indication that they condone this type of despotic regime that exists within the hierarchy of this authority, it's control of the local press and indeed the residents of this county (who pay for this) if they dare to question. Serious questions need to be asked now of the Welsh Assembly.

I'm not sure which is worse - being called a militant or an anorak.

Apologies Cneifiwr, you know what I mean.
Am trying to get to the bottom of the twice postponed full council meeting mystery, I emailed the aptly named 'democratic services' for possible reasons but so far they haven't come up with any.

Had a response; "It was decided by the Chair to push back the meeting of the Council scheduled for 16/01/13 to 23/01/13, primarily because of members’ commitments to attend the Homecoming March by the Welsh Guards in Carmarthen on the same day"
So there we are.

Presumably some of them had winter cruise commitments on 9 January when the meeting was originally supposed to take place.

Council meetings start at 10am, and the march doesn't begin until 12 from the TA Centre. They could be out of County Hall by 12.30 and still have time for photo opps.