As the picture below illustrates, the budget cuts meeting held at Ffwrnes Theatre on Monday could probably have been held in Caebrwyn's shed for a quarter of the price.
Unison staged a protest outside the building and the Plaid group boycotted the event, choosing to send observers instead.

Cneifiwr reports on the 'Ffwrnes Farce' and includes a revealing statement from Plaid councillor Alun Lenny, which I have shamelessly copied below;

"It was very appropriate that such a farce was held at the Ffwrnes Theatre. Unfortunately, it was also a tragedy for democracy and for the people of Carmarthenshire.

I was met with open hostility by certain Labour and Independent councillors on my table. Meryl Gravell tried to get me ejected from the meeting for refusing to take part in the discussion. I told her I'd only be doing what most Independent members do in council meetings...

During a heated exchange, advice was taken from the Monitoring Officer and Chris Burns. I told them I wouldn't be dictated to, had a perfect right to be there and stayed in my seat.

We'd been informed by the council that “As it is a seminar, it is of course not a decision making meeting.”

Yet, during the next three hours the other councillors on my table voted, by show of hands, for all but one of the 52 proposed cut-backs to go out to public consultation.

The same process happened on the other tables, with non-elected business people and members of the press also taking part.

Never, in over 30 in my previous career as a journalist, have I witnessed such a travesty of the democratic process.

Quite apart from the nature of the meeting itself, councillors were presented with a massive tranche of cut-back proposals by council officers and given just three hours to discuss and vote on the proposals. Quite incredible and totally unacceptable.


The people of Carmarthenshire have reason to be truly alarmed and angered that the process of cutting tens of millions of pounds from public spending should have started in such a cavalier manner." 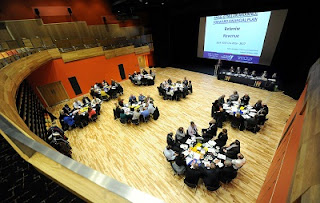 (Update 9.47am - the South Wales Guardian has also published Cllr Lenny's statement)
Posted by caebrwyn at 08:19