It would be a bit remiss of me, given that the subject has cropped up once or twice on this blog (and even in court), not to mention yesterday's announcement from Plaid council leader Emlyn Dole that the leases for the two council Mercedes motors will not be renewed.

Described as 'pretentious' they will be replaced by two 'people carriers' instead, by which I hope they mean the motor vehicles rather than sedan-chairs borne by unrepentant bloggers...
I'm not entirely sure if there will be a cost saving as in fact the civic motors were supposed to be reduced from two to one in the council's budget. Perhaps I can offer them a good deal on a secondhand Ford Fiesta?

Anyway, whilst I welcome this as a positive move, it also shows that Cllr Dole is indeed media savvy and a shrewd operator; very well aware that nothing quite gets the punters' backs up than the sight of pompous officials being ferried around to assorted civic dinners in prestige motors...
So, they will still be ferried around, but it will look less pretentious. 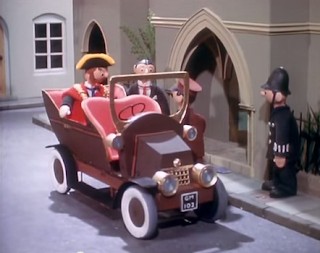 Judging by various comments on social media, the announcement has certainly reached the parts that no amount of governance reviews nor constitutional amendments can in quite the same way.

The lacklustre Extraordinary meeting last week, the misleading press releases claiming that all 39 recommendations had been approved (not the 39 recommended by the WLGA you understand but the 39, watered-down Carmarthenshire style recommendations by the cross-party group) just doesn't have quite the same ring to it as 'Scrapping the Mercs'.

And it does beg the question as to why the Labour group never recognised the possible public brownie points, the potential to bury bad news, not to mention the impact on potential voters public perception by doing this some time ago.

If this move is truly a matter of principle as well as an attempt to save a few pennies, will Cllr Dole, now in a position of power, be brave enough to follow the lead of Plaid MP Jonathan Edwards last year, and instruct Mark James to repay his ill-gotten gains?

"Instructing the chief executive to pay back what the auditor considers to be 'unlawful' is not only the right thing to do, but would go some way to clawing back the enormous amount of taxpayers' money which has been spent on this issue."
(Mr Edwards, May 2014)

The decision to forego the Mercedes transport was taken ages ago. Sadly now only coming to light.

Whilst on the surface it looks like a good move, there really is little comparison in the price/budget for the vehicles. This move merely appears to be paying lip service.

Might have been worse, could have been a Porsche :-)

regards,
your friend in Pembrokeshire

Perhaps it's only just happened because only now has the lease contract/rental on the Mercs expired? Changing them before could have incurred heavy penalty costs? Just a thought.

I was very struck by Emlyn Dole's reference to Carmarthenshire County Council's 39 Steps.

I have one question for him: who gets shot at the end for revealing what they are?