Pantycelyn update 17th May;
A council press release states that Rhys Pritchard Primary school will, depending on an officers report, move to the Pantycelyn site which will be 'partly refurbished', on the condition that the Rhys Pritchard site will then be sold off. Why this had to be decided in secret is beyond me.

Poverty Pam
Some of us have often wondered if there is a joker in County Hall who likes to dish out inappropriate portfolios to certain members. A fine example is deputy leader Cllr Pam Palmer (Ind) who either now or in the past has had 'modern government', the press and 'Youth Ambassador' in her remit. She is also the 'Anti-poverty champion'. You may recall, a couple of weeks ago her outrage and disgust over a proposed pay cut and that, in fact, she was worth far more than the £31,250 she currently stashes in her Hermes handbag, so to speak. 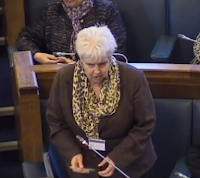 In a report next week, to be considered by Pam, it seems that in order to appear to be actually doing something a Tackling Poverty Advisory Panel should be set up, chaired by Pam, this is in addition to the Tackling Poverty Focus Group, and will provide 'overarching' support and monitor the 'Tackling Poverty Action Plan'.
Who on earth dreams these things up.

Pantycelyn School
With Carmarthenshire Council apparently embracing all things transparent it is notable that over four meetings of the Executive Board there have been no less than seven exempt items. These are items deemed too sensitive, for whatever reason, for the press and public to hear and there is never any discussion over the application of the public interest test.

One item, at the end of March, stands out for caebrwyn but tomorrow's meeting (9th May) sees two items, one of which concerns the future of the now defunct Pantycelyn High School site in Llandovery. The school finally closed its doors a few months ago as the new secondary school opened in Ffairfach, Llandeilo. No one wanted Pantycelyn school to close, nor for the pupils to have to travel miles to Llandeilo, but that's another story.
Campaigners opposing closure were naturally accused, by County Hall, of standing in the way of childrens' education. Divide and conquer being the preferred tactic of the inhabitants of Jail Hill.

Llandovery is now noticeably quieter without the schoolkids, dying in fact. However, long before the school closed the council were formulating planning briefs to sell it off with planning permission for 45 houses on the majority of the site. Rumours abounded that the deeds of land stated the grounds were to be reverted back to the family which originally owned the site. I don't know what happened about that.

Plans were recently mooted by the town Council and other interested groups for the current primary school in Llandovery, Ysgol Rhys Pritchard to be moved to the Pantycelyn site and as the closure of every village school in the area is almost complete it's not an unreasonable idea. However, such a move wouldn't come cheap and with County Hall taking a massive axe to school budgets this might not be feasible.

The Pantycelyn site forms a sizeable chunk of Llandovery, whatever is being decided is crucial to the future of the town and, more importantly, the people who live there.
What could possibly be discussed that warrants closed doors?


Car Parking review
A whole year ago a cross-party 'Task and Finish' group was set up to report on the controversial subject of car parking charges in Carmarthenshire. Last October there was a one month, two hour, free parking initiative in Llanelli town centre but calls were rejected, by Plaid, for a similar exercise in Ammanford a few weeks ago.

The free Christmas parking disappeared a few years ago, replaced by five days free parking (if there was a 'properly' organised event) per year, but excluded the whole of December. Calls have also been made to drop the Sunday charges.


As I mentioned last year Carmarthenshire's profit from parking charges increased from £487,000 to £795,000 from 2013 to 2014 and it's a lucrative business. Granted some of the revenue is used to improve car parks etc and easing parking charges is only one way to compete with the internet and out of town shopping centres but it is one that the council does have the power to influence.

The long awaited report finally materialises at a scrutiny meeting next week, it bears a markedly similar tone to an officers report from last September. Anyway, it seems there were mixed results from the Llanelli free parking initiative and instead of increased demand the demand merely shifted to the free slot. However, had the free slot been between say 10am to noon, rather than the twilight hours of 3 to 5 pm it might have proved a little more effective. So there will be no more free parking initiatives, bad luck Ammanford.

The 5 day per year free 'event' parking will be extended to 7 days but will not only exclude the whole of December, but also the whole of November, to catch those early Christmas shoppers. It also looks like the Sunday charges are here to stay....and finally, in an unfortunate typo the 'policy implications' of the parking review have been confused with substance misuse services..
Posted by caebrwyn at 16:17

I feel that you are rather too quick to dismiss the initiative of setting up a Poverty Advisory Panel to assist the Poverty Action Group in order to inform the Poverty Action Plan. Given the renowned acting talents of the participants and their natural comedic talent I feel that this could be developed into a successful TV comedy series, selling the rights of which could prove very lucrative. The money generated could be ring-fenced to help eradicate poverty in Carmarthenshire. Mark James, who has shown himself adept at money-making opportunities, could broker the deal.

I think the development of Ysgol Pantycelyn as a housing estate is an excellent idea; So many people now want to live in Llandovery... not only does it have no room at its Primary school; it also has no secondary school.

It's perfect for anyone wanting to start a family...

I also feel moving the primary school to the site is also the wrong move;
it would render the majority of the site unusable and the current primary school would probably be sold off to be a house conversion.
The site would best be used as a multiple business/office centre.
such as were the WAG Technium centres in there hayday.

@Tim Indeed! It is also worth remembering that even Pam's Pittance pales into insignificance compared to senior officers' salaries and particularly that of the chief executive, bumped up in the past by illegal payments of course those Returning Officer fees which will prove particularly generous this year, and next.

All that money and still billy-no-mates.

I think you need to get your facts right Ysgol Rhys Pritchard is moving over to the excellent facilities at Pantycelyn . A little bit of refreshment i.e. paint here and there is needed and the children of Llandovery and area will have a Primary School to be proud . The Site of the old victorian building will be homes foe people in Llandovery , it should;d bring building work jobs hopefully for local people - thats good , it might attract more people to the area Thanks to Local County Councillior and Town Council . The Hall in pantycelyn will serve the Town and the future of the swimming pool is guaranteed . So lets celebrate

was that last post by the sugar plum fairy?

No - I reckon from the argument, and the state of the grammar, spelling and punctuation, I reckon it was good ol' Cllr coffin dodger (take your pick on which one), maybe after a snifter or two of a nice single malt just to warm the cockles before bed.