Given my current circumstances I was particularly aware yesterday that it was five years to the day since the #daftarrest incident at County Hall. Quite a lot of water has passed under the bridge since then but at least we can now watch proceedings from the comfort of home rather than endure the aroma of boiled cabbage and political repression. You can, of course go along and film a meeting now, as long as it is also being webcast of course, in that control freakery kind of way.

One thing that raised eyebrows across the nation in the early days of webcasting was the call to 'be upstanding' not only for the entry of the Chair and vice-Chair, which you might expect, but also for 'the chief executive', this has now been replaced with the less embarrassing call just to 'be upstanding', without the mention of titles.
The prayer, as ever, fell on deaf ears as those taking part hoped to be blessed with tolerance and wisdom.

The new Chair, Cllr Eryl Morgan, (it was Labour's turn this year, they take it in turns, and it works on loyalty points and obedience), seems a little mystified about the whole business but fortunately the chief executive will always be on hand to guide him through every step of the way. This will be even more useful should anything controversial crop up of course, there will be no bruised shins for Cllr Morgan and we know who will be in control. 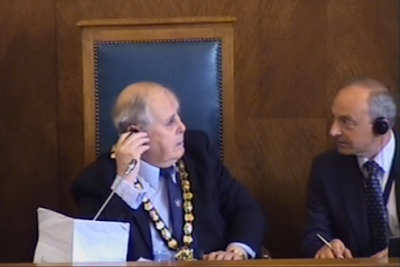 The Chair and chief executive went through the usual blurb about webcasting and fire drills (if there's a fire any intrepid members of the public in the gallery must stay where they are and wait to be rescued) and as, apparently, there were no Chair's Announcements, the meeting moved on.

Next up was a 200 signature petition for the council to make safe and do something about an 'Ugly building on Penygroes Square' either through compulsory purchase or legal action against the owner. The petition was presented, by Cllr Sian Thomas (Plaid), on behalf of a member of the public, to Cllr Jim 'dog dirt' Jones (Ind) the executive board member for all things environmental and, it seems, ugly buildings. As Cllr Bill Thomas rose to speak in support, a reminder was given that no discussion was allowed, good grief no.

While I'm on the subject of petitions you may remember that one of the recommendations of the WLGA governance review was for the council to have a dedicated online petition facility on its website within three months. That was over eighteen months ago and there's still no sign of it.

But back to the meeting and it was at this point that a councillor enquired whether they were going to pay tribute to a former councillor who had recently passed away. Oops said the Chair, er, there were some Announcements and rummaged through his script and reeled them off. Oh dear.


Next up was the Wales Audit Office Annual Improvement Report which, believe it or not, is within the remit of Cllr Pam Palmer. She waffled on about improved governance and public satisfaction and generally how good they all were, she managed to stop short of recommending a pay rise for herself.

There was a WAO recommendation that scrutiny needed improving, indeed, there was not one Councillor Question at the meeting. With committee reports now consigned to the end and just for 'noting', the plan was for councillors to place formal questions on full council agendas having read these reports, unfortunately, for whatever reason, hardly any scrutiny minutes have been published since early March and when they do eventually appear, whatever was discussed will be lost in the mists of time.

Once again the opportunity arose for the chief executive to criticise the WAO, a body he holds nearly as dear as he does bloggers, and the last spat with the organisation must have made things worse. Damn their meddling auditing ways. Unable, under polite circumstances and the dratted webcams to say what he really thought, his comments had to be confined to challenging the WAO to find anyone else who did things better than Carmarthenshire Council...

Much was made of the need for affordable housing which was also a feature of the WAO report and Cllr Lemon pointed out that a recent planning application, by the council itself, for six homes only included 20% affordable, why weren't they all affordable? A missed opportunity surely? Cllr Linda Evans, the Plaid executive board member for housing reminded everyone of her recently announced Affordable Homes 'Journey' and how it would 'deliver', well, sometime soon anyway.

With a light agenda the meeting moved on to the approval of executive board meeting reports which had included several exempt items. Questions were asked about the botanical gardens and how the Welsh Government Task and Finish Group, chaired by Meryl, would make a difference to the garden's struggling finances. Meryl was on hand to remind everyone of her importance and to say that wonderful ideas were currently being incubated. No one was told what these might actually be.

Cllr Caiach enquired about the 'wellness centre' and wondered when full council would be treated to a presentation from the 'partners' as the executive board had enjoyed, behind closed doors? And, crucially, how much money were they actually going to fork out for this project?

Meryl, again an important mover and shaker in the whole project, announced that this wouldn't be quite the right thing at the moment, and ignored the question about the cash. They were, however, most fortunate to have the private sector so involved...hmm. Council (and the taxpayers) shouldn't worry their pretty heads with the details, this project would TRANSFORM Llanelli and indeed Carmarthenshire!

So with another Meryl and Mark vanity project looming ominously on the horizon the meeting drew to a close. All that was left was to pay tribute to various officers for a series of successful dismissals, a very difficult business, said the chief executive. These seemed to relate to earlier reports of alleged misdemeanours in the refuse collection department, data protection laws prohibiting the release of details.
Sadly there were still no dismissals to announce from within the Presidential Suite...

Oh, and just in case you don't peruse the Public Notices section of the council website on a regular basis (surely everyone does?) the annual statutory public inspection of the council's accounts runs from the 5th July until the 1st August. You are legally entitled, by appointment, to pop along and inspect the books if you so desire. I went once, quite some time ago.

12th June; For more on the 'Wellness centre' mysteries read Cneifiwr's latest blogpost;
Merylmania and the Return of the Undead
Posted by caebrwyn at 21:50

Are members of the public still locked inside the gallery whlile meetings are on?

Anon 22:31
I think most of the nonsense, from locking people in, to forcing members of the public, including children, to sign daft undertakings not to film were dropped a couple of years ago as they were not only ridiculous but completely unlawful.

Meryl really needs that wellness centre. Will it have a mental health presence in addition to dealing with physical health needs of the rich and (in)famous?