Carmarthenshire County Unison branch have launched a campaign against the council's plans to outsource part, or all of social care services by forming a Local Authority Trading Company (LATC).
The union's concerns are outlined in their newsletter below; 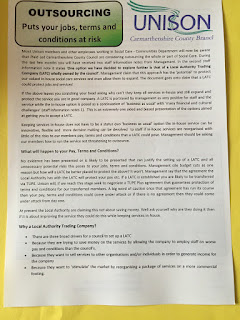 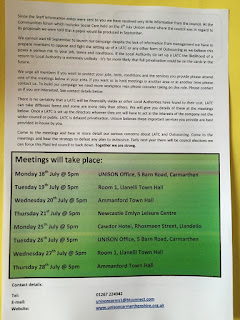 Followers of Mrs Angry's Broken Barnet blog will be well aware of the dangers of large scale outsourcing for staff and residents, particularly for those residents who are elderly or vulnerable and, as she says in this post from 2013 "the company is run by a board of unelected and unaccountable members, removing the scrutiny of democratic overview from its operations".
She continues with the warning of introducing a "market economy into an area where it is grossly inappropriate, seeking to make profit out of the needs of our most vulnerable and dependent residents".

In Carmarthenshire the latest buzzwords are 'innovative' or 'alternative' methods of service delivery, which Plaid once condemned (in those far-off days in opposition) as nothing more than back-door privatisation, as I mentioned earlier this year;
'Whilst in opposition last year the Plaid group criticised the Labour leadership for their 'obsession' for 'essentially outsourcing services and reducing democratic oversight'. It seems that the obsession for back-door privatisation was highly contagious'.

Another issue regarding LATCs, trusts and other arms-length arrangements, despite delivering public services, with public money, is that they are exempt from Freedom of Information requests as they are commercial trading companies.

Since being granted the Key to the Presidential Toilet, Cllr Emlyn 'two barns' Dole and the Plaid leadership have embraced the progress to outsource Leisure Services and Affordable Housing, both of which are well on their way to join Cwm Environmental, the existing LATC for waste services. Social care privatisation has already begun with the closure of council run care homes and over 70% of home care services now in the hands of private companies.

With the final push to form a LATC, currently aimed at adult social care, what precious little scrutiny and democratic oversight there was, (there's never been anything resembling accountability), will be lost forever, or until it's too late.
Posted by caebrwyn at 11:39

You're right about the fact that even while Carmarthenshire County Council runs the Social Care Services there's no accountability, proper scrutiny; add to that the lack of willingness to investigate employees concerns when service users are suffering bodes well for private companies who put profit before proper care. As usual it'll be the vulnerable who are left to suffer and of course the whistleblowing employee who speaks out against abuse and maladministration. We vote these County Councillors in to look after all our interests especially the vulnerable but they seem unwilling to fight for us and our rights. Democracy is not working in Local Government when our representatives and other public servants fail to speak up against coercion, self interest, cronyism and conflicts of interest which allows waste and wrongdoing to continue with impunity. Where is WAG? Where is WAO? I've given up on the Public Service Ombudsman for Wales acting in any meaningful way that would hold a truly rogue Council to account or change it's ways; Carmarthenshire County Council is such a Council. It's all pretty depressing!

Well said Jennifer! What is the difference between a Carmarthenshire Plaid/Labour Council and a Tory council in the leafy suburbs of say Surrey? Answers please on the width of a fag paper. Although perhaps there is one significant difference. A Tory council in Surrey are more open and honest about their stampede to the promised land of privatisation, whereas Carmarthenshire do it by stealth.