A matter of honour

Both local MPs, Jonathan Edwards (Plaid) and Nia Griffith (Labour) have given their reactions to council chief executive Mr James' decision to breach his undertaking and keep the damages rather than hand them over to the council as promised. This week's Carmarthenshire Herald carries a quote from Jonathan Edwards - politically charged of course given the election - but a sincere message nonetheless;

"Its bitterly disappointing that a decision taken by the last Labour administration continues to leave a negative impression of the County Council.
Both myself and my then assembly member colleague. Rhodri Glyn Thomas raised the matter on several occasions with both the UK and Welsh Government ministers - neither governments were willing to intervene.
Now we've seen lengthy court battles which have continued to stain the name of Carmarthenshire.
Given that there has been a legal ruling in this case, I don't know what steps, if any, the council could, or should take to see the original statement honoured.
To this day I have hope that calmer heads will prevail, and that those involved will stand by the statements which have been made
A new Plaid Cymru administration would never follow Labour and allow such an event to stain the name of Carmarthenshire again".

Indeed, Mr Edwards has also written to me in a similar sentiment hoping that the original promise will be honoured.

Labour's Nia Griffith spoke to Llanelli Online earlier this month and whilst, understandably perhaps given the background, keeping the politics out of it, expressed the same sentiment regarding Mr James' promise, talking of moral obligations and doing the 'honourable' thing.

Of course Mr James was given a very high honour, a CBE, a few weeks prior to sitting in the Exec Board meeting where he was unlawfully bankrolled. Whether, since then, the pursuit of his pound of flesh, his use of the police, let alone the breach of an undertaking to council, reflects the honour, dignity and integrity of such a revered distinction is, I would say, a moot point. Many found it quite unfathomable how he'd got it in the first place.

As for Mr James paying any attention to criticism, or even questions from politicians, be they ministers, the first minister, or anyone else, we know from his track record that the words 'rats' and 'arse' spring to mind. As for the reputation of the council, it is clear that this couldn't be further from his mind.

With the first payment being made on Monday (not sure about the next fifteen years) it doesn't really matter to me what he does with it. I remain of the view that he is now gaining, financially, from an unlawful decision in public office. I also expect that my idea of Mr James 'doing the honourable thing' is slightly different from that expressed, in public anyway, by the two politicians.
Whether it goes in the gutter or he uses it to fill up his BMW, we'll never know. 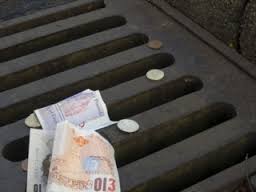 Previous post; Statements in the Western mail - my comments
Posted by caebrwyn at 20:48

If I am elected on the 4th. I hope to bring both your case and the Breakman's up. It is disgraceful what has gone before.

If it helps you realise you're not alone, I too am challenging a costs order through the judicial processes. I put in permission to appeal before Christmas but have yet to get a decision back yet.

However I've already successfully had it changed once!

This one's for taking an Environmental Information Regulations request about three fire stations, first to ICO, then to the First-tier Tribunal.

You'll be glad to hear I won* at the First-tier Tribunal and the information was provided!

This indeed makes legal history as it's the first costs order made by the First-tier Tribunal (information rights) for any amount other than £NIL.

I didn't ask the Second Respondent (Merseyside Fire and Rescue Authority) at the hearing if they were going to “stuff it in the gutter”, but as the public body involved has a predicted £450,000 underspend at the end of the last financial year, I suspect the money they've received from me so far (£500) has not yet been spent!

So far they have suggested they will put the underspend in a fund to recruit firefighters (whose numbers they are planning to reduce by 240 over the next few years).

A blog about Wirral Council and Merseyside's politics

Carmarthenshire Council - Officers'Code of Conduct;
Personal interests 10.1;
"...They must not misuse their official position or information acquired in the course of their employment to further their private interests"

And that is exactly what happened at Pembrey Country Park

13.1 Employees must be aware that it is a serious criminal offence for them corruptly to receive or give any gift, loan, fee, reward or advantage for doing, or not doing anything or showing favour, or disfavour, to any person in their official capacity. Allegations of this nature will be investigated/dealt with in accordance with the Council's disciplinary procedure.

Really? Still trying to have this part of CCCs Code of Conduct addressed.