The council AGM, coming up next month, often provides the opportunity to 'update' the council's constitution with any amendments which may be deemed necessary. As we know this is currently the remit of the 'cross-party Constitution Review Working Group', aka, chief executive Mr James and Legal Linda.

Back at the AGM of 2008, buried within a mound of papers and assorted subsections was the libel indemnity clause. This went unnoticed by council despite, in 2006, having adopted the Order preventing the public funding of defamation claims by officers.

My attempts to highlight this anomaly fell, for a while, on largely deaf ears. This was until a simpler, and indeed more accurate description was suggested to me to describe what was, essentially, an unlawful fund, or a public resource if you will, which could be used to try and silence critics, and the press.

Mr James, as has been recorded in depth, then availed himself of this unlawful facility in his 2012 counterclaim, suing me, as a defence tactic, for referring to this very facility in terms which he found distasteful ...though not for several months after I had published the two words...

Just a day or two prior to the 2012 meeting, (in which he remained whilst the then Labour/Independent Executive Board kindly, and illegally, bankrolled him for whatever he wanted), he had discussed and amended the report, recommending his own funding, with Linda Rees Jones. As a sweetener, he added that if he won any damages, the award would be handed over to the council, he didn't want to personally benefit. Bless.

The rest, of course, is history. I got stuffed in court and Mr James immediately started pursuing me for his damages. They have always been 'his' damages by the way, the promise to his employers in 2012 meant nothing.  The damning Wales Audit Office libel indemnity report was published in January 2014 (there were two, let's not forget the secret pay rise pension scandal) and led to the criminal investigation and the Extraordinary council meeting the following month when it was decided to 'suspend' the offending clauses from the constitution, but not remove them.

The matter of the indemnity came up last year at the hearing where, due to my inability to pay and his rejection of offers, Mr James was attempting to take my home. To date, his pursuance of these damages has cost more than the damages themselves.

The judge, last year was, shall we say, surprised that Mr James had promised to hand over the damages elsewhere, and led him to comment that he clearly wasn't in urgent need of the money. There were more surprises as it was revealed he'd changed his mind and was, in fact, keeping the money himself.

Move forward to last month's hearing and it happened to be in front of the same judge, and he had remembered the indemnity stuff.

Once again he remarked that Mr James was not in need of this money.
This wasn't a reference to his large salary of course, nor his business and property empire, that would be inappropriate, but his promise (now broken) to hand the cash elsewhere.

Anyway I am digressing.
Next month is the ideal opportunity for any strong minded and law-abiding councillors to call for the final removal of these illegal, and profoundly unhealthy clauses, currently in their fourth year of suspended animation. It is only the arrogance of Mr James, not the law, which keeps them on this important, defining document. The removal might give him a bloody nose, metaphorically speaking of course, but it won't be the end of the world.

The clauses, which remain unique in local government circles, can be found here, but to clarify, they are as below, giving the Chief Executive (he is also the Head of Paid Service), the Director of Resources and the Monitoring Officer the delegated power to sue, and for the good taxpayers of Carmarthenshire to pay for it.

The 'legal position' has long been 'clarified'; it was unlawful, illegal, ultra vires, however you want to put it, and given that money was indeed involved, potentially fraudulent. As it backfired so spectacularly last time, it will never be used again. We hope...

Emlyn Dole, firmly under the guiding hand of the manipulative Mr James, has refused to remove them. Unless someone puts their head over the parapet they will remain as a lasting legacy to local government idiocy and a chilling memorial to that toxic culture, bred and lovingly maintained by the chief executive.

I look forward to a Motion appearing on the agenda of the AGM to remove these clauses once and for all.

Whilst I'm on the subject of lasting legacies, and in other news, the planning process for the latest County Hall vanity project, the Wellness Village, is well underway. As part of the Swansea Bay City Deal, this vision of private health care, drug trials and holistic therapy pods looks set to form, potentially, one of the biggest PFI-style taxpayer-draining misadventures we have seen for a while. It also involves our cash-strapped NHS health board.The business case for the project is currently with the UK government.

As for the planning permission, this, well, interesting graphic from the official documents reassures us that we can look forward to a state of deep spiritual joy and enlightenment down on the Delta Lakes swamp, or a weird cult...I'm not sure which..! 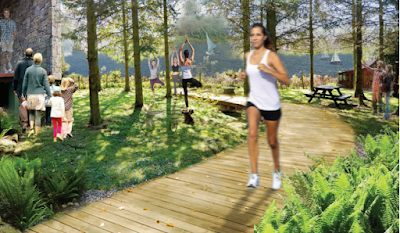 Worth a read re. Wellness project

Thanks for reminding us, here's a direct link to the 2007 article. More from Boston here

Yes, taxpayers will pick up the tab...and I don't think it's just incompetence we have to worry about in Carms...

Some sort of merger will be on the cards, eventually, although none of the three councils seem keen. It's partly the cost and partly the loss of personal fiefdoms. Whatever happens and however it's done it must result in an increase in local democracy not the reverse, we have precious little in Carms as it is.
Reform based on the City Deal model would be worse; there is currently no governance model, no accountability and no agreement between the councils.
The Joint Agreement, still in its umpteenth draft, was supposed to be presented to councillors last month. There's no sign of it yet. Should a Joint Committee ever get off the ground it is likely that many local decisions, even those with very tenuous connections with the City Deal will be made by a remote and unaccountable body shrouded in commercial sensitivity. It will, however, provide a few jobs for the boys...

You must of course realise that Plaid are not there to correct things.
They are only there to criticise others.


Swansea City deal seems to be run from Carmarthenshire ! Thats a bit odd

Its a shame that the reverend Emlyn Dole had a "Road To Damascus" moment and agreed to leave his morals to one side when offered the benefits of becoming Plaid Leader of Council. This affair is a very good reason to wind up Carmarthenshire County Council. It doesn't represent the people. Economically it is a disaster as new houses do not prosperity make except for landowners and house builders and the Wellness lunacy is a bad dream that hopefully someone will wake up from soon!
"Up to 400 jobs" apparently promised. Are they all builders?

Don't count chickens - this is Teflon man who may well end up in control of the larger authority!