With two recent mentions in Private Eye's Rotten Boroughs, Mark James scores a hatrick in the latest edition with an honourable third. That's without Mr James' numerous previous appearances which can all be found on this blog. And Plaid Cymru must be bursting with pride with Emlyn's new found fame... 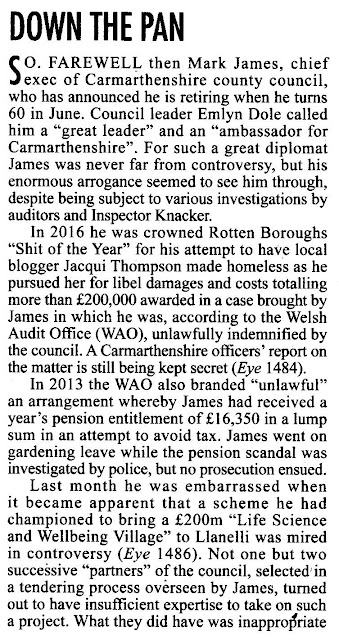 As mentioned above, the last Private Eye article related to the Wellness Dream, slowly sinking into the Delta Lakes swamp.

Mark James, and the currently suspended Marc Clement, have been the two key players of the project, and in it from the start, with Kent Neurosciences/Sterling and the Dickmann clan. The suspended Uni vice chancellor, Richard Davies recently alleged that it was Franz Dickmann who offered another Uni official shares, a discounted house and a job.

The secretive manner by which the council, aka Mr James, appointed KNS, then Sterling, makes one wonder why he was so determined that Mr Dickmann signed on the dotted line...

The 'exclusivity agreement' in 2016 with KNS didn't suddenly pop up overnight. Mr James, along with dutiful former council leader Meryl Gravell, and Prof Marc Clement, who, until late 2015 had been a director of KNS, engineered the deal. Meetings with the company had been held in private and the deal signed and sealed before it got anywhere near a councillor. Apart from Meryl, but she doesn't count.

The deal wasn't renewed in 2017 and KNS subsequently dissolved and, Sterling, with net liabilities of £137,000 were, unbelievably, signed up by Mr James and co in 2018. Sterling, and Kent Neurosciences were, essentially, the same outfit. There were no other bidders. A 'robust procurement exercise' it most definitely wasn't...

Meryl Gravell was made a director of Sterling, until they were ditched, and it wasn't, with respect, for her business acumen. Who made her a director is anyone's guess but, given her undying loyalty to Mr James, she would have been, shall we say, a useful influence on the Board..

Who knows, perhaps it was the inability of bickering Swansea Uni officials to keep any alleged cosy arrangements or sharp practice under their hats that actually blew the deal as far as our Mr James was concerned.
The misleading nonsense, and outright lies he told councillors at December's meeting made him look like a desperate, cornered rat.

Incidentally, I have asked the Wales Audit Office for the details of the scope of their investigation into the council's decision making relating to the project. The council have already commissioned their own external lawyers, at unknown cost, instructed, no doubt, to save Mr James' bacon.

His retirement was announced at a very opportune moment, the net is closing in. He should be personally investigated, preferable by the police, and not just over the Wellness deal, and his finances and tax affairs need to be forensically dissected.

As for the secret report on the unlawful libel indemnity mentioned in the Eye article, this featured in the December edition here. The secrecy continues... and six months after the CRWG meeting I am still in the process of trying to obtain both the officer's report, and the minutes.  .

In the meantime, I have asked Ms Rees Jones, as the senior legal officer, whether Mr James will be repaying the illegal payments, both the libel indemnity and the pension tax avoidance scam, totalling around £60,000 back to the council before he leaves. I've yet to receive a response. (update; it was a 'no')

I've also asked the Wales Audit Office, as it is they who made the unlawful findings and issued the two public interest reports back in 2014, whether they will insist that the money is repaid. I reminded them that it was they who insisted that former Pembrokeshire CEO Bryn Parry Jones paid back his unlawful pension scam cash before he went.

I have mentioned all this on the blog many times, not least of all in my previous post, Mark James retires - the end of a tyrant. The illegal indemnity, and all it entails, is one of those issues which will not go away, retirement or not...

For background to all this please, as ever, search this blog.
Posted by caebrwyn at 19:48

Given the circumstances, one would assume that the leaked letter in the article could only have come from either Marc Clement or Swansea University (I think we can guess from the focus of the article).

What is incredible is that whoever leaked this letter to save Professor Clement's "reputation" has laid bare what he was actually up to in detail, regardless of the rather weak and pathetic defence from Franz Dickmann and a 'friend'.

No-one had a clue about the actual allegations as Swansea University weren't talking due to the investigation but now we do and it doesn't look very good at all for those involved i.e. "24% of the equity distribution in Sterling Health Security Holdings Ltd belongs to a trust in relation to which Prof Clement is solely named".

Yes - 24 per cent of a company responsible for a £220 million project going to an employee of a university that itself was going to put tens of millions of pounds of investment into the Wellness Village.

You couldn't make this up but I suspect there is much more to come on the equity holdings in the Wellness Village over the next few weeks.

From the Walesonline article -Another email conversation includes Mr Dickmann telling Prof Clement it is "entirely possible" for him to use his equity to "benefit the West Carmarthen and West Wales community". The letter says Prof Clement's response is: "Of course I would like to keep some benefit for my family but also ensure benefit for my home region."

It beggars belief that as the accountable officer, the individual supposedly in total charge of this Delta Lakes extravaganza our Mark has not been suspended along with the other four!

Remember that Marc Clement is someone who is paid a six figure sum with a massive pension for working for Swansea University as an employee. One would assume this fully paid job would include leading on the Wellness Village for his employer which was a partner in the project.

So why would he expect shares in that company for his family when he was already being paid extremely well for doing that job? What will the hard working ratepayers of Carmarthenshire who would have been expected to pay for a large part of this project think of that?

It’s a complete joke and the farce that is article is Franz Dickmann 77, saying he wanted to hand over the Wellness Viallge to a younger man, Marc Clement.

Anon 7:36
Exactly. And it's not just as his role as 'accountable officer'. As I have pointed out in my post, Clement, Dickmann and Mark James have been the 'team' from the start, for nearly four years, and he is responsible for the single-minded and engineered appointment of Dickmann. I wonder why. He is crafty, greedy and arrogant, but not naive.
You can also add to this his contempt for the taxpayer, from unlawfully pocketing tens of thousands of council cash to his use of council facilities, resources and staff for his own private interests and vendettas. As has been said before, he runs County Hall like a Sicilian cartel.

But who would be the one to force his suspension? His sidekick Emlyn Dole of course. What a joke. As I've also said, unless the police, the Welsh Government or the Wales Audit Office step in urgently and push for his removal then he will escape investigation and censure yet again.

This project was never for the benefit of the people of Llanelli, nor Carmarthenshire, but for the personal enrichment of a chosen few.

Inside information suggests this is merely the tip of a very large ice-berg. There is much much more that our little weasel has been up to in addition to the delta swamp project. I am hoping it all comes to light before napoleon departs.

I hope you are aware Jacqui but if not I suggest you make appropriate enquiries.

Clearly, the new Registrar at Swansea Uni, Andrew Rhodes, has rumbled them. Clement is not the only one on the take - the previous Registrar has not denied being due to receive shares and payments too - what for?

It looks a lot like the University has done the work others should have done. I bet they know a lot more.

Good riddance to this arrogant over-paid unelected corrupt man - who has treated Carmarthenshire as his personal fiefdom and systematically decimating Llanelli by destroying our history & community & assetstripping the town for the financial benefit of his 'business friends'. I hope one day justice will find him out- no democracy in Llanelli

It may be appropriate for Professor Clement's shareholdings, accumulated over many years, to be thoroughly investigated. It was well known during the "Technium era" in the late 90's/early 2000's that fledgling companies seeking their first accommodaton outside Swansea University's faculties had to persuade Clement to positively vet their applications to rent accommodations in the two Swansea Techniums.This was only achieved by Clement requiring him being given shares in said companies, on the basis that some would be highly successful, and this would be "for the benefit of his family".