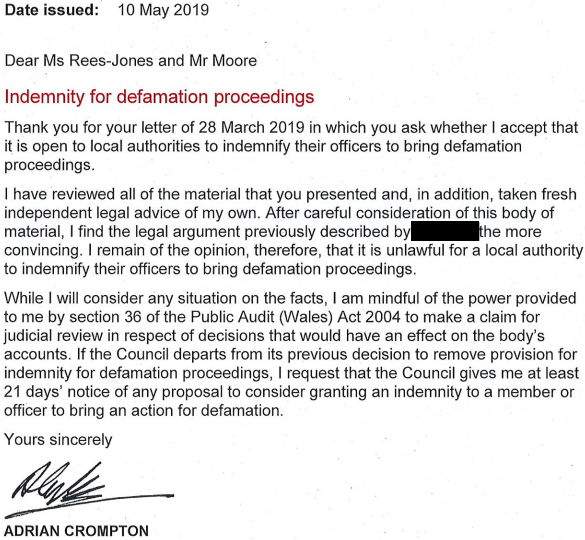 Let's hope Ms Jones will be interviewed by the police at some point, she should be, along with Emlyn Dole. They've both been complicit in a lot of the dirty cover-ups of some very dodgy goings on under Mark James. She's not competent to be a solicitor let alone a Monitoring Officer of a local authority. It could also be the time now for Plaid members to insist MJ repays the taxpayers money he unlawfully took!


MJ ED and LRJ must be suffering from sleeplessness. Now maybe prison might become curative
for their insomnia.

Emlyn Dole asked a member of the Opposition 'What part of the answer, "No", that he had just given to a question, did he not understand? Perhaps he should now ask himself this question on the WAO reply to the reinstatement of the libel indemnity.

Anon @ 12.30 - I agree wholeheartedly with your comment. We can only hope that there will finally be a glimmer of light at the end of the tunnel for all Carmarthenshire but especially for Jacqui.

One often hears of the term "Gardening Leave". In the case of James ,Dole and L.Rhys Jones it might well come to pass as they seem to possess a joint interest in the cultification of fungi.When it comes to dealing with the Carmarthen public it has often been a case of "treat them like mushrooms,keep them in the dark and feed them plenty of s--t"!

What a great test of your new CEO this will be - she will be forced to take a side .... hmmmm! And I still say Jacquie should be given compensation for all the problems (and financial worries) she has had bringing the "illness village" scandal into the open. Oh, and the payments she has been forced to make to the ex-CEO should be cancelled forthwith.