The notorious Grillo site at Burry Port cropped up again a few weeks ago in the form of a mysterious exempt item on the Executive Board agenda. The couple of hectares, by the harbour, was once the site of a Zinc Oxide factory owned by Grillo but, demolished in 2007, it has formed part of the Council's 'Masterplan' for the area ever since.
Unfortunately the site was, and still is heavily contaminated with highly toxic unpleasantness which may produce some interestingly flavoured veg should future residents of the planned 230 houses do a bit of gardening. The lethal and widespread cocktail of heavy metals, organic compounds and hydrocarbons not only needs to be removed but carefully transported and dumped elsewhere. It's also liable to flooding, it's part of the creaking Llanelli sewage system, and seeps regularly into the harbour and the highly protected Burry Port inlet.
Nearby, another council led housing development at the Gwdig Estate is slowly washing itself down the mountain onto the road below, propped up by £5m worth of 'landscaping'.
Who is going to buy all these houses is anyone's guess but there you go, that's another story. As for the harbour itself, boats still sit at uncomfortable angles on a bed of silt and sand and the new owners, Marine Group Ltd have yet to transform it from gloopy mud to a promised vision of basking yachts a la Monte Carlo. Tesco withdrew plans to build a store nearby several years ago. 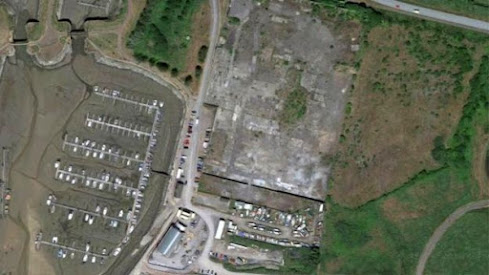 Aside from all that, the Grillo site is undoubtedly a bit of an eyesore. As with many developments emanating from County Hall, a more sensible, and cheaper option might have been to clean it up (and not just the usual Carmarthenshire Council solution of sprinkling a few inches of topsoil on top, Wellness-style) and provide a pleasant landscaped wildlife haven to complement the, erm, exciting potential harbourside developments.
But this is County Hall and, at the time, the Masterplan was a Mark James thing, which inevitably meant it was all a bit odd, bit like the Wellness thing.
The Grillo site was bought, at some point in the past, by shell company Castletown Estates Ltd. The purpose of the purchase was, presumably, to secure planning permission, grab a few public grants to clean it up, and flog it on to developers. The Director of Castletown Estates Ltd is Tory peer, and merchant banker Lord George Magan, his wikipedia entry suggests he's something of a colourful character. Magan donated £1.4m to the Conservative party in 2011 and was subsequently made a life peer by David Cameron in 2011. He also acquired a suspended sentence a couple of years ago for some 'creative' accounting.
Most people trying to secure speculative planning permission are usually left to their own devices (apart from some who have benefited from some very dodgy grants to help them along), but in this case Mark James bent over backwards to assist Lord Magan with his Burry Port plans.
Naturally, under pressure from Mr James, the council itself approved the plan but given that it was on a C2 flood plain it was called-in by the Welsh Government who promptly said no chance.
Undaunted, Mark James took the next step, without consulting councillors and in 2013 the council went off to court with Castletown Estates to fight the Welsh Government, and lost.
Move forward a year or two and after some tweaking of the flood maps, permission was finally granted for Lord Magan and co in 2015. The affordable housing element was slashed due to the cost of remedial works, those heavy metals had their use after all.
The Masterplan, meanwhile has lain dormant. In December 2018 it became apparent that Casteltown Estates had no interest in cleaning up the site, or more likely, no developers wanted to touch it with a barge pole. Step forward Mark James, now aided by Emlyn Dole, who announced that after pandering, financially, to Magan and co for several years, they were going to buy the site for two million quid, and 'get things done', or GET THINGS DONE.
'Getting things done' appears to have been to extend the planning permission for another three years, in yet another joint application with Castletown Estates. No remedial works have been carried out to date, by the council or anyone.
So after this complex and long running saga, noted for the curious relationship between Mark James and Castletown Estates, and not forgetting his heir apparent, Director of Regeneration, trusty deputy and now CEO, Wendy Walters, the Grillo item reappeared earlier this month.
It turns out that the 2018 purchase never went through. It was, apparently, dependent on various planning niceties and reports, it's not clear quite what, nor why the council had to fork out even more cash to help Castletown boost their profits before the sale was finally agreed. Last month's decision was, in the depths of a global pandemic and economic crash, to finally buy the site. This time, however, the price was withheld. Was it more? Or less? I have made enquiries for this elusive figure and await a FOI response. It would also be interesting to know who exactly they are paying the money to.
(Update; FOI; the council will be paying Castletown Estates £1.5m for the site and have spent £15k on planning applications since 2018. They wouldn't reveal the estimates remedial work costs due to 'commercial sensitivity'...)
The council are attempting to attract developers and intend to sell the site on but with the price unknown, the remedial work said to cost in excess of £10m, I'll be surprised if there are many takers, there's been no one so far for the past fifteen years. But there you go, with the combination of a colourful Tory peer and Mark James' penchant for helping himself to council funds the whole saga is contaminated in more ways than one, and whatever the costs of this toxic plan, and with the council nearly half a billion in debt already, I really hope it won't be the unsuspecting taxpayers of Carmarthenshire footing the bill, again.
For further background please use the search term 'Grillo' on this blog, and see also several previous posts from Sian Caiach and Cneifiwr.
Posted by caebrwyn at 07:26

It does seem strange that in a time of crisis the County Council's priority is to buy back a very toxic and contaminated site. Perhaps Baron Magan just did not have the millions to de-contaminate the site and proceed with the new build?

Council leader Emlyn Dole clearly decided to "help" the Baron by buying back the site, but can the people of Carmarthenshire afford to spend millions cleaning it up or is it just to be left leaking heavy metals into a cockle fishery?

I hope Natural Resources Wales, who run the fishery, do check the cockles for heavy metals as well as bacteria but it would not surprise me if they don't.

At the time of a nationwide health crisis, global warming and economic downturn it does not surprise me that Carmarthenshire County Council see the purchase of the Grillo Site as a priority. In my experience, the Councillors simply do what they are told to do by the senior local government civil servants, without giving their electorate the courtesy of explaining why?

The sad thing is that after so many projects have been financed by the taxes of the electorate, hyped and then dumped, in the Llanelli Area, who will believe the explanation? I'd still like to hear it!


when ever Burry Port harbour is mentioned it always reminds me of the Council senior employee buying a dredger boat from ebay
It languished in the harbour for years as it was useless for the type of dredging the inlet needed
Where it is now ? possibly still there !

Is the sarson vinegar factory still there ?

whoever takes this on will need deep pockets

Sadly the pollution in the Burry Inlet, part of the Carmarthen Bay and Estuaries European Marine Site is likely to become a lot worse following the Llangennech train derailment and fire last week. The train spilled 750 tonnes of oil and diesel which is now finding its way into the Loughor Estuary and the Burry Port Cockle Fishery.

The sites, along with the Wetlands Centre are Sites of Special Scientific Interest (SSSI) controlled by the EU Habitats and Birds Directive. The Directive has already been illegally breached over several years by the creaking sewers, the Grillo site and the council's determination to build on flood plains and contaminated land.
The Wellness Village is another one of those developments.

As for the Burry Port harbour, it is understood that the Marine Group Plc were given a 100 year lease by Carmarthenshire council with no probationary period to prove they were able to clean up the harbour.

Working boats, whilst enduring two increases in mooring charges, have had their access limited due to the mounting silt and have seen a drop in income of 50%.
The consensus of opinion is that the company, whose owner is based in Switzerland, is waiting for Burry Port to be transformed into Llanelli's St Tropez, driving out the working boats and attracting the luxury yachts, the leisure and lifestyle sector and very expensive moorings.
Anyway, looks like everyone's in for a long wait.

A week prior to the announcement about the Grillo development, the Western Mail published a map showing the coastline which would disappear by 2050 as a result of global warming, this site was amongst those areas.