Previous post; Mark James - off the hook again?...Updated
After having had some time to digest the CPS response to the investigation I am finding it more an more incredulous that no charges were brought. And, for that matter, why our politicians aren't raising a stink.
The revised police statement was crucial. There was evidence that these people were due to pocket millions of pounds in bribes from a development funded by public money. What is there not to understand. If a benefit claimant pockets an extra £60 in housing benefit that they know they shouldn't have, they're hauled before the magistrates or at least named and shamed on a council website, who are, apparently, 'protecting the public purse'.
There's been precious little of that at County Hall.
For a serious crime such as large scale fraud, which this was, it should make no difference if one of them is unfit to stand trial, as long as the evidence is there to implicate the rest of them. Which it was.
Including the former CEO of the council, Mark James.
However, I'm clearly in no position to influence the CPS, but senior politicians are, or are able, at the very least, to call for a public inquiry.
Mark James, whilst CEO, spent roughly three years arranging a personal deal to receive millions of pounds in bribes from a company he was appointing, directly, through an obviously rigged tender.
As I said, this crooked, criminal arrangement went on from 2016 and influenced every aspect of the development, and the City Deal until it broke down, and until James hurriedly left the council in June 2019. It was signed, sealed and just about to be delivered, and maybe some of it already had.
The 'arrangement' was for the loot to be funnelled into offshore blind trusts.
So, do we sweep all this under the carpet? Do we wait until Clement and co decide to go to employment tribunals and for the evidence to trickle out? Given that they're all doing very well thank you elsewhere, I don't think they'll bother, it would be damaging. We'll see.
Of course, Mark James, who is currently conning the residents of Century Wharf, appears to have got off scot free. Again.
If we choose to believe that no one else in the council was aware of what was going on, and James certainly had a knack of silencing anyone who got a little curious, then now is the time to act. It's time he's finally exposed as the crook he is.
He has form. From Boston, to the curious case of the £5000 in the envelope, to his bung to a private company, to tax avoidance, pilfering the public purse, to silencing whistleblowers, to lying to the council and the courts, using council staff and resources for his own private use, failing to declare his interests etc etc. And that is just what we know about.
All this went on for seventeen years, but pales into insignificance to the con he had planned for the Wellness village and the City Deal. We also know what many of the other key City Deal figures thought about him.
Going back seventeen years is clearly impractical, but for the three or for years before he left the authority it would be a relatively simple matter.
As has been set out on this blog, and from this criminal investigation the truth has again been revealed, James is a liar and a crook. But, without support from politicians and Welsh Government, those he has wronged, or conned, including the taxpayer, will be left with a very grim legacy.
I have emailed the councillors of Carmarthenshire to make sure they know exactly what went on.
I have also emailed the current police commissioner, Plaid Cymru's Dafydd Llywelyn, as reproduced in full below;
To; Police and Crime Commissioner, Dyfed Powys Police
Dear Mr Llywelyn
I am sure you are aware of the recent decision by the CPS not to charge several suspects following the Wellness village bribery investigation by Tarian, the regional organised crime unit.
You may also be aware that the police revised their own statement shortly afterwards which said that there had been evidence of potential criminal acts.
I am sure that it is in your remit, as the current PCC, to ask the CPS to review their decision and indeed charge the suspects, one of which is the former chief executive of Carmarthenshire Council, Mark James.
Whatever the reasoning behind the CPS decision it cannot be right that the individuals involved had accepted, and stood to personally gain bribes of millions of pounds in public cash and equity from the developers of the project. This was fraud, and had been years in the planning.
The tender for the project, the central issue in the investigation, was, to put it bluntly, rigged by Mark James. Not only did he stand to gain a substantial amount himself, he jeopardised the integrity of the council and the entire City Deal.
The fact that this is a Plaid run council and you are a Plaid Cymru PCC should, I trust, not be an issue.
I look forward to you early reply to this email, and details of how this matter can be taken forward with urgency by either yourself or your successor.
Your sincerely
Jacqui Thompson
It's perhaps worth remembering what the previous Police Commissioner, Christopher Salmon said about the County Hall regime in 2016. He didn't name names, but everyone knew who he was talking about.
"Carmarthenshire County Council. Wales’ answer to a Sicilian cartel. It’s everywhere you look (thankfully only in Carmarthenshire – so far as I can tell). It extracts vast amounts of money from residents which it showers on favourites, hoards property, bullies opponents, co-opts friends and answers to no one, least of all local councillors." 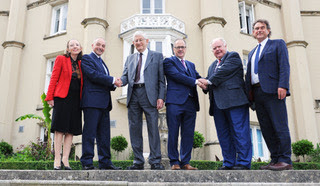 2018 - The fraudulent deal is done. Mark James and Marc Clement laughing all the way to the bank.
Posted by caebrwyn at 19:52

One for Private Eye to look at. The CPS seemed very keen to prosecute _you_ at one point for writing things about Mark James, & that seems like something that should have been cut off at the knees, not taken all the way to the courthouse steps. The decision not to prosecute anybody seems... worth review...

@Ken Haylock
Absolutely. One of the things I was to be prosecuted for was repeating the Private Eye Rotten Borough 'Shit of the Year' award given to Mark James in 2016. Unsurprisingly, he never actually complained to Private Eye.
It is remarkable that planning to squirrel away £millions in bribes to offshore trusts fell at the first hurdle of justice.
This crook still has, of course, the keys to my home.
I'll keep fighting.


you mention above -why our politicians aren't raising a stink.
its quite striking that the current leadership and shoeing CEO Walters are quite on all things
the llanelli swamp project is now funded thru the city deal so millions of pounds will be going there
carmarthen looks like a vacant lot with some many shops closed and no clear future for funding to replace the EU programmes
is there anything comeing out of County hall ?

Anon 10:17
You would think that local politicians might have had something to say when the former CEO, Mark James, was conning the council taxpayers with a fraudulent deal from which he stood to gain millions in bribes. In fact Plaid leader Emlyn Dole positively encouraged him. Adam Price and Jonathan Edwards were both quick to condemn the same corruption and sleaze in Westminster, but not in their own, Plaid-run back yard. Funny that.
They, like other senior politicians, might have been glad to see James go but they failed, at numerous crucial junctures over the last few years to stand up to this arrogant and dishonest bully. Some of us will keep fighting, I for one, have no choice.

As for what's coming out of County Hall to boost the local economy, a whopping £200k, for instance, was spent on external legal advice for 'procurement matters' in the last couple of years, which is £200k that could have been better spent on actually procuring local goods and services. They've also managed, through years of wasteful vanity projects which now require propping up, to run up a debt of almost half a billion quid, with around £20m paid out in interest each year.
They've also managed to preserve the Mark James Slush Fund, with Emlyn Dole and co quite prepared to squander millions in legal fees to silence critics of the regime.
That's what's coming out of County Hall.
Sadly the democratic deficit also continues, with a cabal of senior officers controlling a puppet and pliant executive board. Backbench councillors still have no real say on policy or decisions and the priority of the executive board is, as usual, for PR puffery and spin. My advice is don't believe a word of it.

What people need to know is that Carmarthen Council (Shire bit removed due to the limited area they care for) carry out their duties using the "Farm Priciple".

The CEO is the Farmer (with her whistle).
Emlyn Dole is the sheepdog (does according to whistlers commands).
Plaid Councillors are the Sheep who go where the dog leads them.

There is absolutely no control by Councillors, the just play politics.

I could not find anything in the committee meetings from carms - what i did not notice is a complete absence of the CEO from any meetings ?

No need for the CEO to be there.
All is decided beforehand.