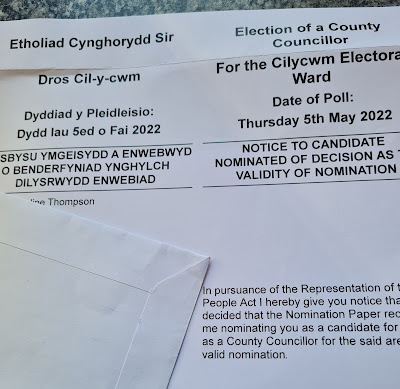 I have decided to stand for County Councillor in the forthcoming election to be held on the 5th May.
My nomination papers have been validated so my name - Jacqui Thompson - will be on the ballot paper as an independent candidate for the ward of Cilycwm, Carmarthenshire.
The Cilycwm ward covers several communities in north west Carmarthenshire; Llanwrda, Llansadwrn, Cilycwm, Ffarmers, and everywhere in between, and borders Llandovery, Lampeter and Llangadog.
The full list of candidates for the whole county will be published on the council's website on Wednesday 6th April after 4pm.
Posted by caebrwyn at 09:29

Great idea Jacqui, just hope that Cil y Cwm residents can see sense.
Our current nodding donkeys are a total waste of time, the believe that politics are more important than their constituents.

The list of candidates has been published and the voters of Cilycwm ward have a choice of three candidates; the incumbent councillor who has just ditched his independent status and joined Plaid Cymru, a Tory candidate, and of course myself, the thoroughly independent Jacqui Thompson

Wish I could transfer my vote in Ammanford to you as I have no one to vote for here,Labour,Plaid no way what a choice.