The importance of filming meetings - updated

The Minutes to last month's full council meeting have just been published and provide a perfect example of why meetings should be filmed. It was filmed of course and remains in the archive, a true record of what was said. Minutes, as we know, only have to be a reasonable report of the decisions made and basic written record of the proceedings. And in Carmarthenshire, 'basic' they certainly are.

To give an illustration, Item 12 of the Minutes states;

'The Chief Executive in response to a query about members’ e-mails stated that a report on the matter, and on the Council’s e-mail and internet usage policy, would be submitted to a future meeting of the Policy and Resources Scrutiny Committee'

Based on this version of events, you might have been a little misled into thinking this was a general point raised about emails, in fact you'd be hard pushed to know what it was about at all.

You may possibly remember though that it was a little more specific than that, and related to the very sensitive and controversial issue of email 'snooping'.

By the wonders of modern technology, how the, erm, 'debate' actually went can be viewed here;

The fact that we, and the council, have an archived record enables both further discussion and debate in the big wide world. My comments on this particular item can be found here, 'Yesterday's webcast..almost home and dry'.

In fact it takes the debate about anything discussed in an open meeting to a whole new level. What is vitally important is that not only do webcasts continue but they are extended to other meetings, Planning, Executive Board and Scrutiny as soon as possible.

The Council chief executive, given a two page spread in today's Carmarthen Journal, warns of a Doomsday scenario with higher than expected cutbacks on the way. The effectiveness of constructive (or critical) public scrutiny though (and to be honest, I don't think that's quite what the council has in mind when it said it 'invites comment') is entirely relative to the transparency of the decision making process.

Carmarthenshire Council's begrudging webcast pilot is not a culture changing event, far from it. Extend it, allow the public to film (still no proper 'rule' against it by the way), allow public question time, allow councillors to tweet from meetings and stop trying to control the editorial independence of the local press etc etc...and we might be getting somewhere. All at no extra cost.

Update; Excellent blogpost from Mrs Angry from @BrokenBarnet on the subject of transparency and @EricPickles. Mrs A's source (late night meeting in unknown north Finchley car park) tells her that Eric may be introducing statutory measures to ensure councils comply with the transparency agenda, coming after a week of nonsense in various English councils where public filming was banned.
Time he had another go at the Welsh Government.
Not something to begrudge: transparency in local government - Eric Pickles, still banging on the door of the Town Hall

Update 5th July; The Telegraph reports on the daft goings on in Keighley (Yorks) where ten police officers were called in to remove a group of pensioners who were trying to film a meeting of the town council. Mr Pickles said the council had 'lost the plot'.

In the Twitter exchange below Mr Pickles says he doesn't rule out legislation to ensure councils open their doors; 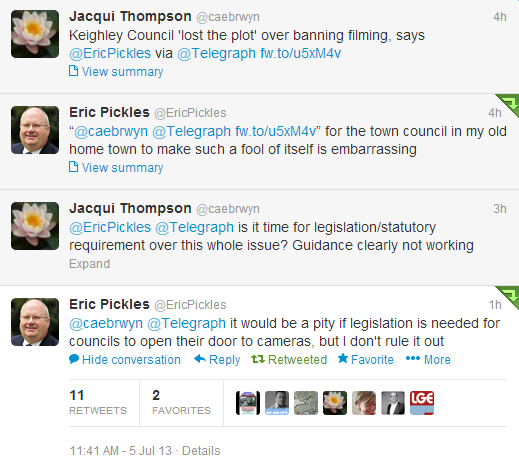 Clearly, Keighley Council is not the only one to lose the plot!

Let's hope Eric brings in legislation. God knows it's needed. I fail to understand why Councils are so edgy over transparent meetings. The more they try to avoid them the more suspicious we all become. Not good for their reputations.