Further coverage; "Blogger will fight to the bitter end"

Further to my previous post about the article in the Western Mail, this week's Carmarthen Journal reports on the ongoing attempt by Mr James to enforce payment of the damages arising from the unlawfully funded counterclaim. Although, unlike the WM, the Journal doesn't mention the unlawful funding;

Llanwrda blogger will fight to the bitter end to save home

I will indeed fight to the bitter end; as I said in the article, I have no choice.

The article quotes Mr James from earlier in the year, as apparently he is currently away. Therefore the acting head of law and monitoring officer, Linda Rees Jones, provides a statement which can be read in full on the above link.

I do not want to reiterate what I've already said about the outcome of the case, I've already made my views very clear but Ms Rees-Jones reminds us that it was I who instigated the initial proceedings; I did so of course because of the defamatory comments which Mr James decided to send to the Madaxeman blog.

Ms Rees-Jones also reminds us that 'all litigation carries a risk'. She is quite right but for Mr James there was never any personal risk, it had been arranged that if I had won, any damages awarded to me arising from Mr James' comments, would, like his legal costs for the counterclaim, have been paid by the taxpayer, not him.

One of the more interesting points which has recently come to light concerns something Mr James said in his sworn witness statement for the trial. He claimed that a former councillor, who he named fully, had personally praised him for his comments on the Madaxeman blog. The former councillor was astonished by this claim and has offered to provide a notarized statement that such a conversation never, ever took place.

The Welsh language current affairs magazine Golwg also features an article in this week's edition and does mention the unlawful funding; 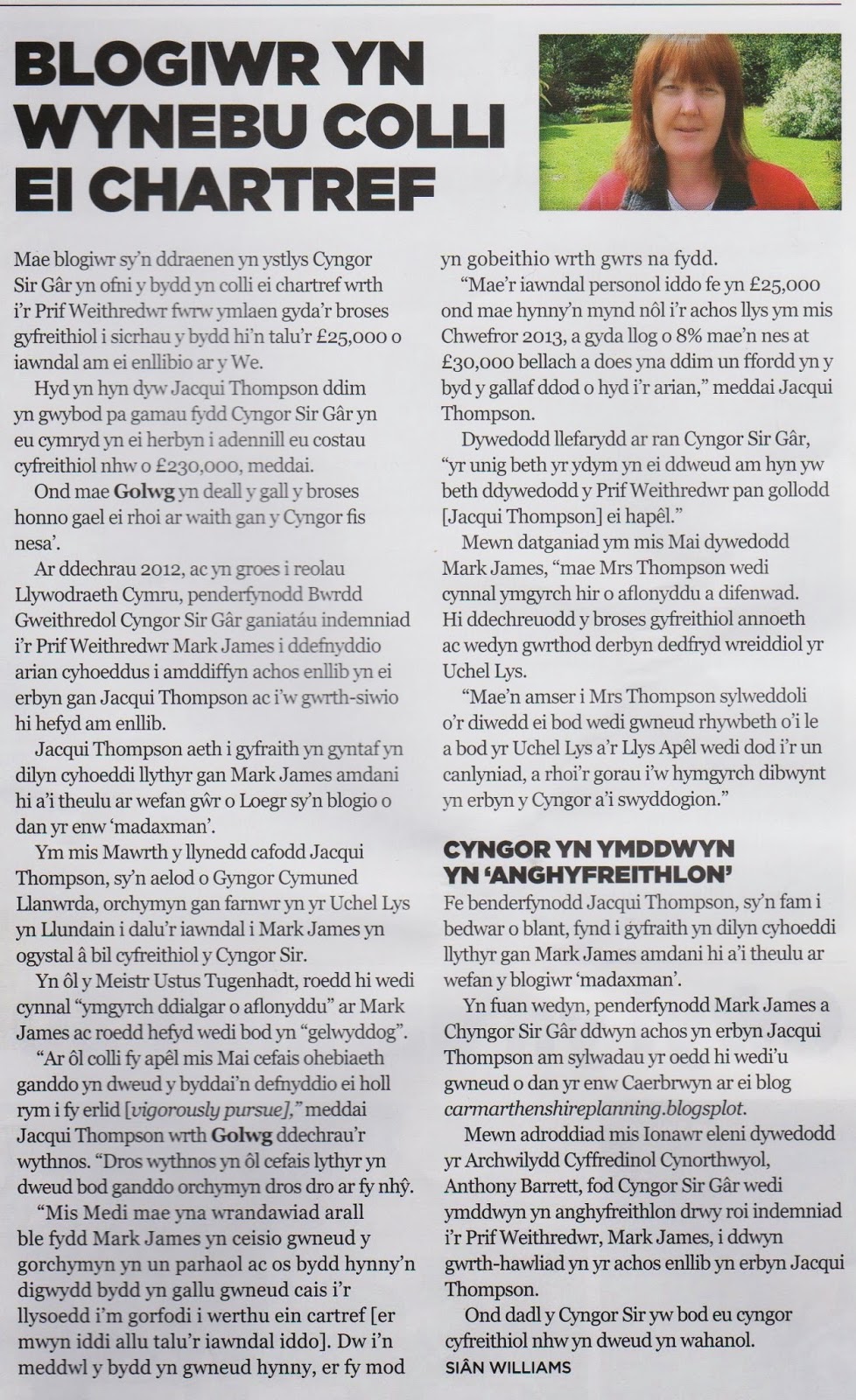 As I said, I will fight this to the end, whatever the end might be.

The latest news from Pembrokeshire is that Chief Executive Bryn Parry-Jones has (finally) taken a 'leave of absence', gardening leave to you and me, whilst the police continue investigations concerning the unlawful pensions scandal.
The last straw was a revelation by two councillors from the Pembs ruling Independent group that they were subjected to a 'foul mouthed' tirade from Mr P-J after they voted in favour of Jacob Williams' motion to ask for the unlawful pension money to be returned, back in May.
It is a fact, often forgotten in a couple of west Wales counties, that councillors can vote any way they like, not as the chief executives expects them to.
More details, can be read on Jacob Williams blog, today's Pembrokeshire Herald and  BBC Wales
Posted by caebrwyn at 13:50

Re Linda Rees-Jones comment in auricle: Mark James may not have instigated the actual legal proceeding, but, and it's a huge but - HE DID instigate everything that led up to them. From your arrest in the public gallery to his outrageous comments on the Madaxeman's blog. I believe they were outrageous especially from a Chief Executive of a local authority. What did he expect - you, like myself, simply accept smear campaigns that are not justified.