It's now been eighteen months since the Extraordinary council meeting to discuss the pension and libel indemnity scandals exposed by the Wales Audit Office reports and exactly a year since the issue of libel indemnities appeared, again, on the agenda in July 2014.


Tucked away in a report for Scrutiny on Friday is the annual report from the Monitoring Officer, Linda Rees-Jones (mysteriously no longer 'acting'). Included in the report are various Constitutional amendments which have been brought to council, and approved, over the last twelve months.

One of these is "To note that the provision allowing members to grant indemnities to Officers to bring libel proceedings would not be reinstated in the Constitution."

What we have actually had in the Constitution, since February 2014 is this, in its various forms;

It has never been removed, just suspended. I suspect that when Mark and Linda have finished rewriting the constitution and it is presented to council in September the clause will have been airbrushed out, without explanation and especially without admission of wrongdoing. I could be wrong given Mr James' email to Cllr Bill Thomas a few weeks ago, however, we'll assume (and hope) it will finally go.

There has been no need whatsoever for the 'legal position' to be clarified because every man and his dog knows it was illegal in the first place.

If the clause is permanently removed it is because it is 'contrary to law', or whatever polite way you want to put it.

As night follows day, this means that, despite the view of Mr James and co, the actual indemnity was also illegal. Or unlawful, as the Wales Audit Office put it.

As far as the council are concerned, the legality of the actual indemnity can only be determined by a court, whatever that's supposed to mean. We may find out one day.

What has happened is that there has been a great deal of constitutional and legal manoeuvring and manipulation to ensure that the chief executive and those responsible have got off scot free.

In the meeting last July (2014) Cllr Emlyn Dole (then in opposition of course) politely soothed Mark James' concerns that the 'suspension' of the clause, and the acceptance of the First Minister's statement the day before damning the actions of the council, would not be retrospective, and would not interfere with the indemnity granted in 2012.

In the event, the Welsh Government opinion was merely 'noted' and the clause suspended. This kept both the external auditor, and more to the point, the chief executive, happy and clinging on to his CBE.

This left the curious situation where the council were agreeing that the clause was illegal but when it was used in practice, it wasn't. Did they not think this was a bit odd and perhaps they'd been shafted?

In fact, the chief executive knew what he was doing was illegal in January 2012, hence the misrepresentation of legal advice to the Executive Board who were too dull to even question it. The unlawful presence of Mr James in the meeting also ensured they toed the line.

The upshot of all this was to save the skin of the chief executive and the usual suspects and avoid any unpleasant confrontation over his publicly funded legal costs. This was not the only issue of course, there was also his tax avoidance pension scam.

Looking back, I still find it quite incredible that not only the chief executive but the head of law and the Executive Board members present at the meeting when the indemnity was granted are still there. The only one who vaguely paid the price was Kevin Madge, who lost his £49,000 per year. This handsome remuneration has now passed seamlessly on to Cllr Dole.

I have spoken to Plaid supporters in my area and there is deep concern and disappointment that Cllr Dole and Co have, it seems, sold their soul to the devil, and Meryl of course. 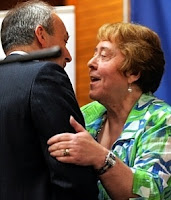 Bryn Parry-Jones has gone, expensively I know, from Pembrokeshire but Mark James remains, despite the extended rap sheet - and there's only one reason, Mr James has played the lot of them, aside from one or two, like a fiddle, whereas in Pembs Mr Parry-Jones couldn't.

In addition, Mr James is now in the fortunate position, whether by design or coincidence, I couldn't possibly say, of facing no effective opposition to his power...all worked out rather well didn't it Mr James?
Posted by caebrwyn at 08:54

Its a shame that Plaid, [?? due to the shock of the unexpected offer of "power" after unacceptable new Labour Leader Cllr Jeff Edmunds was rejected as a coalition leader by the Independents] grabbed the sweeties without much to show for their strong political bargaining position in that moment..
Contrary to the usual political negotiations before coalitions are generally made, the whole agreement seems to be just that Cllr Dole would be leader and each party would have 5 seats on the Exec Board. If there was a detailed political agreement the Plaid councilors I've spoken to don't seem to be aware of it.
Perhaps there is a cunning plan and they are all keeping mum in case the Indies find out. Or maybe not. Elected members not having much clue as to what is actually going on is something of a tradition in Carmarthenshire.
The policy of sell everything off, continue cutting public jobs and services, with no plans to reinstate them ever again, just follows the Tory policy of "smaller government" as before. Basically the philosophy is stop supporting the poor and the elderly with public services and instill independence and self reliance in these people who have been wrongfully spoiled by the welfare state in the past.
Plaid claim that they are politically blocked by the Indies at every turn and bound by the financial decisions of the last budget. If that's true Plaid have voluntarily agreed to walk into a cage. All they'll get is a few of their councilors having much larger salaries and the "glory" and responsibility of "leading" a council which they don't actually have the power to control. Much like Labour did before them. I hope someone sends them a cake with a file in it!

Yes Sian you are right as always.Putting it simply, opposition parties do inherit the mistakes made by a previous administration but that is no excuse for secrecy for whatever reason.Plaid has to start showing some clear objectives and really take control.

In its desperate efforts to be all things to all men Plaid Cymru is now avoiding controversial issues. This is then presented to the public as being 'responsible', and proof that Plaid is fit to be trusted with power. Wrong! It's deception, it's cowardice, and proves that it would be pointless giving Plaid Cymru power at any level.

I agree with all the comments! I too thought the wrongdoing that has been going on in the past by the officers would at last be looked into but it seems, as previously was the case, the executive is still choosing to ignore concerns and continues to support the CEO and his officers before they even consider the interests of their constituents (the Carmarthenshire residents)! Because of this sheep like attitude the PIDA, PSOW, WAO and even info released under FOI holds no fear for the CEO he knows the CCC's reputation will always come before truth and accountability. So unless WAG involves itself this LOCAL AUTHORITY will never change! Of what use is the Standards Committee and the Audit Committee in looking after our interests and in controlling the wrongdoing of their officers; can anyone tell me?

As a former councillor in England my greatest regret is that I was not brave enough to tackle difficult issues in a more robust way. I also went down the conciliatory, let's all be friends and do this for the sake of the community route and made an enormous mistake - I should have been more bolshie, more difficult and definitely given officers a much rougher ride. Officers put every obstacle they could in my way when their views differed from those of councillors. They hid information, "lost" information, censored information ... but I found this out too late.

I am disgusted that the Plaid group on the council have apparently just rolled over to have their tummies (?) tickled by the CEO and appear to be making no attempt whatsoever to stand up to him.

I am cancelling my membership of Plaid forthwith.

Anonymous @14:32
I don't know whether I am right on this but would you achieve more by staying and making your views known or leaving and doing it from outside the party/

You would achieve more by staying, making your views known and acting as a group on those views, taking no notice of those people who tell you that you cannot do something because they say so or because it is too difficult or just because. Be controversial, be outspoken and follow through, ignoring threats.