The July Agenda...and other news

Next Wednesday sees the last full council meeting until the cogs slowly grind back in to action in September. By then Mark and Linda will have rewritten the constitution (with their own special version safely locked up in the presidential drawer for the summer recess). The little tweaks and amendments so half heartedly, and smugly, approved on the 17th June bringing the council roughly up to the Edwardian era rather than early Victorian.

Herald columnist Cadno observes in this week's edition that; "..It will come as a bolt from the blue that the Council has decided it should: ‘Develop, agree and promote a set of public service and leadership characteristics and values’.

There are two points to be drawn from this almost mindless sentiment; firstly, if Carmarthenshire County Council is only now getting round to this after nineteen years’ existence as a unitary authority, precisely what has it been doing before this point; secondly, what – or who, readers – has it had instead of values for the last few years?.."

Sadly, last weeks legal threats to a councillor from that the most senior of council employees shows that not only does that Napoleon Complex continue to afflict County Hall but the number one WLGA recommendation for a change in culture has been, as we feared, completely ignored. 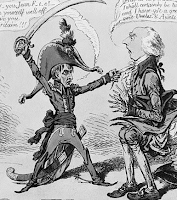 The new leader, Cllr Dole is making promising noises about openness and all that, but it carries little weight when every press release quoting our new man includes a mirrored quote of agreement from Pam or Meryl.
It seems so long ago now that Pam would give Plaid the evils across the Chamber, all of five weeks...they're all blowing kisses now. As for the Labour 'opposition', Jeff Edmunds even posted Cllr Dole's PR piece about 'scrapping the Mercs' on his own Facebook page. 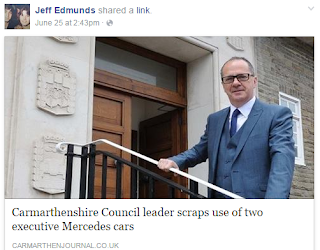 Also on the subject of joint statements, the Herald looks at the thorny issue of predetermination in respect of the Grillo applications and in particular the double excitement of Cllrs Dole and Gravell in a press release before the final decision was made;
"Even though the Planning Committee had already indicated it was minded to approve the schemes while they were still subject to the Welsh Government call in procedure, it seems remarkable that two senior Cabinet members were so confident that the plans would progress even before the Planning Committee had begun its final deliberations on the scheme."

The Herald compares it to the preparatory work for the Carmarthen West link road started months before the funding for it was approved by full council.

To be honest I don't think I've seen anything quite so predetermined for some time; Labour Cllr Pat Jones had her knuckles slightly tapped for her 'let's get on with it' quote to the press long before it made its merry way back to the planning committee. It wouldn't have mattered if it hadn't been for the fact that she was a substitute on the planning committee.

Even the council solicitor gave the committee a warning over their collective enthusiasm back in April. At that meeting the enthusiasm boiled over into something resembling a witch hunt as to the identities of the 'guilty parties' who had the temerity to request the call in.

So keen was Labour Cllr Terry Davies at last weeks planning committee to finally approve the six applications that he suggested they approve all six en bloc, presumably as a ploy to be first in the queue at the canteen.

The chair had to remind him that as a a matter of proper procedure, planning applications had to be voted on individually. You would think that cllr Davies might have remembered that small but significant point having sat on the planning committee for at least three hundred years.

Returning briefly to the subject of Facebook and despite the Chair of the Council, Peter Hughes Griffiths recently announcing that social media was all far too dangerous, he now has a 'page'. I have a feeling it is being run on his behalf, perhaps by a 'young person' and all postings will be approved, in triplicate, by the Pravda News Inc, County Hall.
It might be informative if our leader, I mean Mr James of course, (who else), were to write a Facebook page, or maybe even a weekly blog. It could include a daily religious message to save our souls and a regularly updated list of subversives clearly in need of spiritual guidance.

Anyway back to next weeks meeting and our Cadno considers the continuing lack of public questions;

"Does that mean you all think the Council is right in every word and every deed? No it damned well does not! The process by which you can ask those questions needed to be clearer and more open. None of this ‘deliver thy question by the back gate when the cock crows thrice’ nonsense: email should be good enough.
After all, it is good enough for Mark James to threaten legal proceedings against a serving councillor, it should be good enough for those of us unfortunate enough to pay his bloody wages!"

(I did provide some guidance to the current Public Question obstacle course back in September).

Neither, I notice, are there any Motions nor questions raised from those committee reports now consigned and sidelined on the agenda 'for info only'. (For comparison, the last meeting of Pembs Council featured seven Motions on Notice and five councillor questions)

There are just two councillor questions. The first is from Labour Cllr Jan Williams raising her concerns over the future of Parc Howard, Llanelli. Her question is addressed to Meryl and seeks reassurance that it will remain in public hands.

Meryl will of course provide the standard soothing scripted response but as we know Cllr Williams does have a supplementary question. Maybe she'll ask just how far the county council is progressing with Loca Ventures/Select Villages/KMS/SIB Global (BVI)/Atlas Hill...or whichever name, and there are many, that the outfit is currently going by. The Herald have been doing their homework and have published several articles on the subject. My post from early June is here.

A Mr Nick Spysnyk, who, despite not actually appearing as a director of these companies, seems to be leading the takeover, and has spoken exclusively to the Llanelli Star to say that the bid has been 'put on the back burner for now' due to the public outcry.

Although he offered to talk to the Herald his contribution was clearly going to be limited as, according to the latest Herald article which is not yet online, he didn't want anything to do with 'that journalism crap' so spoke to the Star instead.

I suspect they'll soon be back, this spider's web of companies and 'associates' seem to be exactly the kind of outfit our council could happily do business with....and as they're still promising to develop the 'Robbie Savage hotel and spa experience', known as the 'Four Winds' at Ffos Las. Meryl may well already be hooked, the combination of racehorses and flame haired footballers could prove irresistible...

The second councillor question concerns the mysterious whereabouts of free parking pilot for Llanelli which was supposed to be decided by the Exec board following cross party support back in April. My guess is that there are two thorny issues troubling the exec minds; the loss of revenue which will be frowned upon by officers, and demands from Cllrs representing towns outside Llanelli for their own free parking pilots...

Also on the agenda is Cllr Dole's forward plan taking us up to the end of the municipal year next May and the colossal 140 page Annual Report and Improvement Plan (ARIP), the annual bumper full-colour list of achievements, complete with quotes from satisfied punters, pie charts, graphs and endless aspirational lists of what "We will aim..." to do.
A load of b******s really.

The document is required by law and must take some cobbling together, it has to be something of a thankless task, being read by virtually no one, even determined bloggers can find themselves glazing over after the first few rainbow coloured sentences.

Perhaps the most significant event this year will be the full corporate assessment to be undertaken by the Wales Audit Office after the summer. Amongst its findings will be the councils progress and reaction to the WLGA report. Unfortunately, aside from those two notable, and scandalous, occasions when the WAO stood firm, it has something of a history of not wishing to upset its client. Let's hope it's approach is rather more rigorous and critical than usual.

Lastly, the Scarlets announced last week that they were considering selling the naming rights to the Parc Y Scarlets stadium as a form of sponsorship. I would have thought that in honour of the lengths our chief executive has gone to to channel so much taxpayers money into this failing venture, even arranging to pay off one of their loans, they should at least give some thought to naming it 'The Mark James CBE Stadium' (making sure not to forget the CBE)....

It's the least they could do as sadly, despite Mr James' instrumental and visionary role in the inception, and the arranging of the, er, "won't cost the taxpayer a penny" funding, he missed out on having his name immortalised in Boston with the Princess Royal Stadium, having been fortunate to have left the authority long before the auditors were finally called in.
Oddly though there are a few folk who remember Mr James very well, and not just in relation to the stadium either. Still, more on that another day.

The Heralds can be found here and here and on Twitter @carmsherald and @LlanelliHerald
Posted by caebrwyn at 12:53

Lets not forget that CBE stands for Complete Bullshit Expert...