The Labour opposition group on the council awoke briefly from its slumber yesterday with Cllr Jeff Edmunds calling for Plaid leader Emlyn Dole to consider his position over the barn planning fiasco.

As the Herald reports, he said that Cllr Dole, as a councillor, and leader, should be setting an example;
"If this is how he is leading then he should consider his position. I am not aware of all the facts but it is of paramount importance that they must now be brought to light in the spirit of openness and transparency"

He is quite right of course although as leader of the opposition you would have thought he might of gathered all the 'facts' relating to his political opponent. We'll see if he puts his words into action though, as aside from his brief jaunt in 2013 into openness and transparency over the 'allowable expenses' scandal, I don't remember him calling for Kevin Madge, Mark James etc to 'consider their positions' over the pension and libel indemnity scandals...But that's politics for you.

However, it remains to be seen whether Cllr Edmunds will get the chance to challenge Cllr Dole as I have heard, from reliable sources that not everyone in the Plaid group is happy with the way things are going...Cllr Dole trampling all over the planning rules might just be the last straw.

One thing that every democratic institution needs is an effective opposition, regardless as to who is in power. It needs to visibly scrutinise and hold power to account, particularly in the main arena, in our case, this is the council chamber.

Perhaps the Labour opposition group in a somewhat difficult position. When Plaid took over in June their opposition promises of radical shake ups didn't materialise as it became clear that Mark and Meryl had retained a firm grip and nothing had changed. This left the opposition unable to criticise what they themselves had started, and which Plaid appear happy to finish. However, this is no excuse not to scrutinise.

The summer months have passed and the council is well and truly back down to business yet next week's full council agenda contains no searching questions, nor topical Motions from the opposition, despite there being an abundance of recent material. Instead, there's a lengthy Motion about the price of milk, important I know but I'm not sure its something County Hall can influence, and a question about tatty bus shelters.

Only a couple of weeks ago in an interview with the Herald, Cllr Edmunds declared that it was down to the fact that he'd been prepared to challenge the 'status quo', ie Meryl and Mark, that lost Labour power.

So far, the only real evidence of anyone publicly challenging the status quo is from Cllr Sian Caiach. Time for Cllr Edmunds and some of the more capable members of his group to step up to the plate and at least provide some semblance of an opposition.

On the subject of capable members, Emlyn's barn wasn't the only bizarre event at yesterday's planning committee meeting, as up for a decision was a 420 pupil primary school in Copperworks Road, Llanelli.

The planning officer gave a detailed, ten minute, illustrated presentation of this major application and the Chair then threw it open to questions.

Labour Councillor Terry Davies MBE, who had, presumably, been listening attentively, couldn't understand why they were being asked to decide on this school again when they'd already been out on a site visit and approved the development some time ago and he felt that all his fellow committee members must be wondering the same thing.

There were clearly some puzzled looks and the planning officer confirmed that no, this was the first time this development had ever come before the committee. The Chair eventually realised that dear Terry had confused the whole thing with another school, several miles away in Burry Port. fortunately it had not yet gone to a vote.

If I was being polite I would suggest that perhaps Cllr Davies had a 'senior moment', something to which we are all susceptible. However, we're not all deciding on major planning applications.... Then again, I don't think he's the only one on the committee who hasn't got a clue what's in front of him.


Lastly, this week's Herald features a detailed update on the Breckman case which has featured on this and Cneifiwr's blog for the past few years. The article is not yet online but provides a summary of the background and the appalling way the couple have been treated by both Dyfed Powys Police and the County Council. This post from 2012, following a BBC Wales programme, provides a brief snapshot of the story.
(Update 12th October; the Llanelli Herald have produced an interview with Ms Breckman, available to view here).

Last week the Police Commissioner, Christopher Salmon issued an extraordinary, very fulsome apology to pensioners Patricia Breckman and her partner Eddie Roberts on behalf of Dyfed Powys Police, for everything. From numerous, and completely erroneous, arrests, to accusations of doctoring video evidence and for deliberate misrepresentation in official reports.

Mr Salmon said;
"...It is quite clear that you have been severely let down by the authorities and for the part played by Dyfed Powys Police in this we apologise wholeheartedly
We recognise the enormous mental and physical stress this has placed on you both in what should have been a happy time of your life. We are deeply sorry that you have had to experience this.."

In reference to this apology from the police, and as the council are catalogued as being equally complicit in its disgraceful treatment of the couple, Ms Breckman contacted Mark James, chief executive, to request a meeting to review the role and conduct of the council throughout the saga; that other 'authority' mentioned in Mr Salmons letter.

Then, as the Herald puts it;


"With his customary deft, sympathetic and humane approach to such matters, Mr James responded; 'In the circumstances I do not believe a meeting with yourself would serve any meaningful purpose'"

The Herald have placed an, er, interesting caption below Mr James' picture.
So true, and works on so many levels; 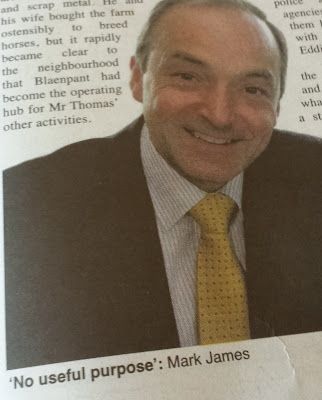 I must agree with with Cllr Jeff Edmunds calling for Plaid leader Emlyn Dole to consider his position.

Unfortunately it seems to be a case of the pot calling the kettle black.

Emlyn Dole has certainly found himself in the glare of publicity and I go as far as to say I hope he is feeling distinctly uncomfortable.Of course we don't know what is going to happen when it comes before the planning committee.That is anyone's guess.

Given the comment that the council are equally complicit in its disgraceful treatment of the couple, perhaps Ms Breckman should contemplate legal action against james for the disgraceful behaviour he has inflicted on her in his role as chief executive of the council.

In which case I wonder whether he would be keen to settle out of court or, once again, use all available council funds, and some, to defend the indefensible, seeing as he is so keen to kip a lid via legal means on anyone who dares question his 'authority'.

Surely this mans days must be numbered; he is an embarrassment to the county.

Cant you bring a vote of no confidence in him? After all, the people of Pembrokeshire rose up against the other one, who I understand was as bad as james, and also served no meaningful purpose.

I would suggest that Ms Breckman and Mr Roberts make a FOI request. The Freedom of Informarion Act 2000, allows individuals to request access to any recorded information about them, held by any public sector organisations.

It takes a real MAN to admit to his "errors and omissions" but a SNAKE of a person to refuse. Where does that leave our Chief Executive? I'll leave your readers to decide (What's that about "if the cap fits...etc"?

I’m sure Labour will be delighted to see ‘Dolegate’ run and run - they’ll be laughing all the way to the ballot box.

Yes I think so.