Update 3rd December; The Committee decided to go on a site visit to look at the development below so the decision was deferred until then.

Despite the fact that the Persimmon development in Hendy for 91 homes, is currently the subject of a call-in request to the Welsh Government by Nia Griffiths MP the application is up for consideration at next Thursday's Planning Committee (S/31228). You will recall that the developers had already started work on the site and had inferred, at a public meeting that they understood permission was already in the bag.

The County Councillor eventually called for the application to go to committee, and the number of objections and local outrage over the premature mass clearance of the site made this inevitable. The chance of a quiet rubber stamp under delegated power has passed. It is put forward as 'partly retrospective' and, as you might expect, with a recommendation to approve. 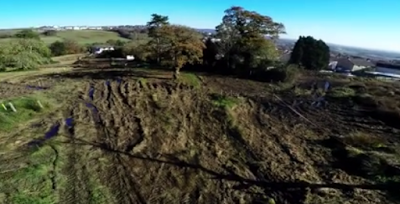 The committee can, of course, be 'minded' to approve, or refuse whilst the Welsh Government are considering the call-in request although the final rubber stamp can't be applied until that decision is made.

One concern is that part of the development, the access road is outside the limits of the LDP. These limits are supposed to be strictly adhered to, and any departures reported to the committee. However, in Carmarthenshire these rules, most rules in fact, can be flexible depending on whether the applicant is a 'pillar of the community' or a favoured developer. In this case, planning officers gave the nod for this incursion into the forbidden zone prior to the application even being formally submitted.

Another concern is the increase in traffic, including the junction with the M4. The concern is summarily dismissed and is a classic case of officers relying on a desktop exercise provided by the developer rather than listening to the people that live there and deal with the traffic every day, and of course some cash in mitigation.

Aside from the merits or otherwise of the application the question remains as to why the developer commenced the works, was permission merely a formality as they reportedly suggested? This is not the only site in Carmarthenshire which Persimmon are developing which suggests close contact with the council. As this is now going to committee, the report describes Persimmon's actions as 'unfortunate'..

It will be interesting to see how the committee deal with this, (it will be webcast) and whether the S106 sweeteners and the fact that 'Emlyn's Barn' has set something of a precedent when it comes to retrospective applications will be enough to override the numerous local objections and concerns....
Posted by caebrwyn at 20:43

I could go on ad infinitum! The LA reying on the info on traffic management supplied by the applicant? Survey undertaken in school holidays? Not listening to the voice of local residents? Giving outline planning to an application deemed by officers in the consultation on the LDP as not required as there were more appropriate sites within the locality. I could go on........
The whole system is flawed. I have no trust or confidence in the planning process which means that me and mine have massive question marks about the integrity of officers and Councillors

This is par for the course Anon @00.32 - it's the way the council works and there doesn't seem to be anything anyone can do about it.

In a different authority, I was involved in questioning a developer's assessment of traffic and managed to get a meeting with a local authority highways team. They frankly admitted (though, of course, not in writing) that they were understaffed and underskilled for the number and complexity of applications before them and that developers, able to throw money at large companies, would almost always triumph over them. They even said there had been an instance of a developer submitting a traffic assessment for a totally different area with the name of the town changed but where the real name of the town had slipped through a few times!!! They also said that they worked on the application giving them the most public hassle first. Ours was giving them that hassle so we got a review. Needless to say, the numbers then changed significantly. Although, also needless to say, it did not alter the fact that the big developer got his permission and the town got its traffic jams.

Time for CCC to be closed down and replaced with a new authority with new staff and new councillors. Previous office holders to be banned from holding office again.

Time for a public inquiry into CCC planning. Just look at the bull-dozing of an SSSI SAC site while CCC watched-a criminal offence but nothing has happened yet.