Less important Executive Board Members forced to take 'pay' cut? And other news

Arm-wrestling
Back in November the council's Democratic Services committee rejected a proposal from the Independent Remuneration Panel for Wales to cut some Executive Board Members' 'salaries' by around 10%.
The draft proposal was somewhat cancelled out by a recommended increase in the deputy leaders' allowances from £31,250 to £33,000 (we have no less than two deputy leaders, currently Cllrs Pam Palmer (Ind) and Plaid's Dai Jenkins), and the Leader's £48,000 was to stay the same. Those proposals were not rejected of course. Expenses would not be affected.

Unfortunately for our senior councillors, the IRPW, in its final report published last month, chose to stick with its original proposals. This means that Executive Board members, apart from Pam, Dai and Emlyn, will now have to decide who remains on £29,000 per year, and who will drop to £26,100.

The IRPW has also stipulated that allowances to Committee Chairs will also be on two levels depending on their level of self-importance, some will stay at £22,000 but some will drop to a mere £20,000.

The Democratic Services Committee will now have to make recommendations to full council, but whether it will cause upset amongst our senior councillors, who all consider themselves to be very, very important, remains to be seen.

Personally, as Executive Board meetings are now webcast, I think an arm-wrestling contest would be a far more appropriate method of resolving this tricky situation.  But please, definitely not mud wrestling. 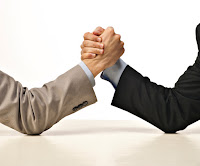 Governance
Some of the recommendations from the recent Wales Audit Office Assessment are also coming up for attention, and possible rejection, over the next couple of weeks and a few are worth noting.

For matters of governance, the WAO have recommended, amongst other things, that a register of all Delegated Officer Decisions should be published, what a good idea and, it turns out, already a requirement over the Severn Bridge. As is public filming and the publication of spending details. Not so in Wales where every year council budgets go out to consultation without anyone knowing what exactly is being spent, on what, and to whom.

At least with the advance of technology we now have a record of what's said in full council rather than the selective minutes. At the last meeting Councillor Jan Williams mentioned the fact that there was not one mention in the minutes of her demand for evidence, from Meryl Gravell, that local people had scuppered a lottery bid for Parc Howard when she, and Cllr Cill Thomas held evidence to the contrary.

The Chief Executive helpfully intervened to say that as it had not been an official question, they didn't record everything that was said. Not even, it seems, a direct challenge to the truthfulness of statements issued by an Executive Board portfolio holder. Fancy that. Not that the chief executive concerns himself with the truthfulness of his own statements of course.

The WAO also suggest that the council supplies the Audit Committee with all regulatory reports and that it oversees the Corporate Risk register, in fact it's whole remit should be reviewed.
The WAO continue to be concerned about the council's management of grants and have also suggested that it might be a good idea to hold, for the purposes of scrutiny, central registers of tenders and contracts - the scandals over the Supporting People and Coastal grants are testimony to that being a very good idea indeed.

As for the Council's Constitutional Review Working Group set up, you may recall, to mangle the WLGA's 39 Governance recommendations, I have been told that they may meet if any tweaks to the constitution are required in the near future. I have also asked if their agenda will include the final removal of the 'suspended' unlawful libel indemnity clause, but this has not been confirmed...and remains something of a delicate matter for the chief executive I'm sure.

---------------
In brief
At the last council meeting, in a blink-and-you'll-miss-it moment was the brief mention that a new tier, and pay grade of senior management was being introduced. I failed to detect any cost assessment or impact on future budgets, or even a mention in the current budget.

At another recent meeting a £100,000 overspend on primary school transport was mentioned, though the news it's unlikely to reach the press office. This, said the relevant officer, was due to the closure of many small schools, "This was an example of a small change having a huge financial impact" A small change? Not for all those local communities, and the financial implications seem to have come as a bit of a shock.
Posted by caebrwyn at 10:53

Please let us know when you have further detail of the new pay grade and management grades. I have my thoughts on why this may be, and in terms of satisfying my own curiosity would love to understand this.
I suspect that there is a reason behind this which is likely to right and perceived wrong and fix this!

By way of an update, (and due to temporary tech issues I will use the comments section) a report for next week's Audit Committee has identified 'fundamental weaknesses' in several aspects of the council's Leisure Services including Pembrey Country Park and the Millenium Coast. Procedures have clearly not been followed etc. I have heard about problems before and the authority's intention has always been to sell off these services and indeed 'leisure' is on its way to becoming a trust.
This will be an interesting one to follow.
http://democracy.carmarthenshire.gov.wales/documents/s5084/Appendix%20C.pdf

Anon 00:57: there is a little bit of info in the Pay Policy statement, and the 'brief mention' can be seen on the council webcast.