A couple of weeks ago I mentioned that a worrying internal report on the leisure facilities at Pembrey Country Park and the Millennium Coastal Park was due to be considered by the Council's Audit Committee. The committee met last Tuesday and thanks to the Carmarthenshire Herald and reporter Alan Evans we have some idea how things panned out, I'll link to the Herald article when it goes online. (Now online here)

The report, or, as the council likes to call these things, the 'Review', was requested by the Director of Communities, having taken over the responsibility for leisure following the departure of the previous Director, Dave Gilbert OBE (now an advisor to the Swansea Bay City Region board). 'Historic issues', whatever they were, were to be looked at.

Anyway, the 'Review', which also included Burry Port Harbour and the Ski Centre at Pembrey Country Park, found there were 'fundamental weaknesses' and a "general non-compliance with the Authorities established procedures", in other words, 'an almighty mess', action was considered to be 'urgent'. The specifics were listed thus;

1. Authority’s procurement arrangements have not been fully complied with

2. Procedures for collecting and accounting for income need to be improved to minimise
the risk of monies being misappropriated

3. Procedures for accounting for assets need to be improved to minimise the risk of
assets being stolen or misused, and to ensure that maintenance programmes are
adhered to

4. The management and administration of agreements / leases for private enterprises
need to be improved / tightened to clarify responsibilities and maximise income

5. Procedures for the use of facilities by third parties need to be improved

1. Health & safety issues have been identified that may present a risk for the Authority
and its employees;

1. Staff working hours including TOIL [Time Off In Lieu] arrangements are not always being recorded and are not being managed at an appropriate level

2. Employee Declaration of Interests were not being completed appropriately.

The big question which arose at the meeting, mainly from Cllr Bill Thomas (Lab), was how on earth had these findings been arrived at, where was the full report? Had there been fraud? What actually instigated the 'review'? How long had senior officers been aware of these 'historic issues'? He also suggested that an independent third party be brought in to investigate.

Even this scant two page brief makes for grave reading and the failure and reluctance to present the full findings suggested that the detail was in fact, damning.

I have been contacted over the past couple of years by anonymous sources alleging 'procedural improrieties' and even criminal activity at the parks and facilities, and so has the Herald. When the paper raised the issues with the council last year, all were denied.
Along with the rest of us, the Herald wonders just what has been swept under the "already lumpy carpets" at County Hall. As we know, blowing the whistle at Carmarthenshire Council is not easy, particularly if you value both your job and indeed your sanity.

The officers present at the meeting, Head of Leisure, Ian Jones and Head of Audit, Phil Sexton denied that fraud had been found. They talked about 'issues', 'challenges' and 'weaknesses', and areas which needed to be 'strengthened and improved' without identifying what exactly was wrong. No surprises there.

With the Plaid deputy leader Dai Jenkins vowing to leave no stone unturned, the reality was that the Committee, in their impotence, could do no more than formulate an Action Plan to monitor 'improvement', spoon-fed for the next eighteen months or so, by officers. As Cllr Thomas said, the 'Review' should be the start of a full investigation, not the end.

Let's hope for better this time, particularly as the Plaid led administration are fully behind the decision to offload the whole leisure department to a 'trust', which will, of course result in even less democratic oversight than already exists. Presumably they're also fully behind the long-running Mark and Meryl Masterplan to sell-off chunks of the Pembrey peninsular to their preferred bidders. 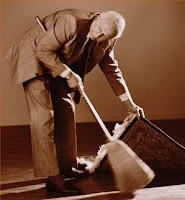 Also on the agenda was further evidence that the council's grant management procedures are still floundering with one report (a set of minutes from the Grants Panel) listing no less than six projects, including the Strategic Regeneration Areas at Cross Hands and Kidwelly, being subject to 'Qualification letters' from the Wales Audit Office. The minutes states that the issues with the WAO are 'being resolved' and provides no more detail than that. As per ususal.

For those wondering about the outcome of last Monday's exempt report entitled 'Enforcement of Costs', well, so am I.
I blogged about it prior to the meeting here; The Matter of Costs
Whatever the Executive Board decided, or didn't decide behind closed doors, rest assured I will, in due course, have plenty to say about it.
As for the Chief Executive's bailiffs, they continue to phone and I continue to tell them there's nothing doing, the cupboards are bare. Their threats appear to be escalating and, in direct proportion, so is my resolve.
Posted by caebrwyn at 17:07