Well, I'm not sure what that exercise set out to achieve, other than another means to apply unnecessary pressure.

Mr James' solicitors had drafted numerous reasons why it was imperative I was questioned before a judge, rather than the usual court officer. I've no idea why. In the event I basically swore on oath that I am of limited means, something Mr James has been very aware of for three years. His solicitor read from a standard form of questions which, I'm guessing, were complied at some point in the mid-1980s. Aside from the usual financial basics, I was asked, for instance, if I had a hi-fi, a video player or a camcorder.

I made a token offer of £1 per week. Not quite sure how that's going to go down. Mr James has rejected all previous offers (despite trying to claim I had not made any) and I have told him repeatedly I have no money. He already has a Charge on my home. The council now have an interim charge for £190,390

The latest development in the recent flurry of legal activity hovering over Caebrwyn concerns the damages awarded to the chief executive, Mr James, following his counterclaim for libel. This now stands at over £30,000.

An 'Order to attend court for questioning', regarding my finances, was served on Friday evening. The court in question is in Carmarthen, having been transferred from London due, according to the paperwork, to my previous assertions of limited means...

The hearing is on the 29th July and I will be questioned under oath and as, apparently, there are 'exceptional circumstance' it will be before a judge.

Mr James currently has a Restriction on my home and this latest move appears to follow the unsuccessful attendance of High Court bailiffs a few months back.
Mr James has been aware of my financial situation for three years. 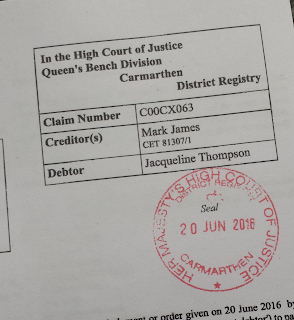 As I have said before, I disagree with the judge's findings against me, from the libel, case in their entirety and my position has never changed.
Also, I probably don't need to remind anyone that the counterclaim was unlawfully funded.

For the 'recent flurry' of ongoing legal activity, including involvement of the police which began three months ago...and the threat of Contempt of Court proceedings, please see here, here and here. I have yet to hear about any of that.

I will be seeking (yet more) legal advice and for reasons which I hope are obvious, I will not be publishing comments on this blog post.
Posted by caebrwyn at 11:12

Just to say thanks for all the comments and kind messages of support.