February Council meeting, and the budget

As usual the event kicked off with the parish notices and chair's announcements, the chief executive joined in at one point to wave vaguely at the public gallery and welcome 'visitors from London'. He didn't elaborate further as to who they were. A crack team of forensic auditors seconded from the Met Police perhaps? I am joking of course.

The main event for full council was of course the budget but prior to that were a few Notices of Motion to get through. First up was Cllr Sian Caiach who had managed to get a Motion relating to the sewage problems in Llanelli past the chief executive. Cllr Caiach's motion was for the council to regularly test the water quality of all beaches where people visit and swim, not just the two 'designated' beaches at Pendine and Pembrey, in the interests of public safety. Of particular concern is Llanelli which currently features a large council sign urging people to wash their hands after visiting the beach.

Plaid's Emlyn Dole decided, oddly I thought, to oppose this because it might use some resources and wasn'tnecessary. Cllr Caiach reminded the chamber that the UK government had already been found guilty of breaching EU water quality directives specifically in the Llanelli/Burry Port area. With the help of some Llanelli area Plaid councillors, and with some Plaid and Indie members abstaining, the motion was carried, but the chief executive was quick to chirp up, twice, that it had to go to the executive board to find the long grass to be considered as policy, all of which rather explains why he allowed it on the agenda in the first place. Anyway, what's a dose of e-coli between friends, or tourists, anyway? 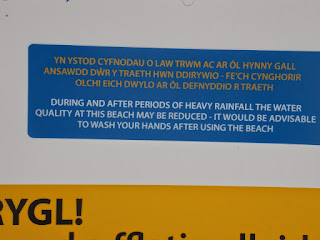 Next up was a motion from Plaid's Peter Hughes Griffiths to set up a group of councillors to look specifically at rural issues. Not a bad idea and something I suggested during the Cilycwm by-election. Labour decided to put in an amendment to include all areas of Carmarthenshire, rural and urban. which, in my view, as a rural dweller and community councillor, defeated the object.

Meryl Gravell reminded everyone about all those rural grants she'd signed off, reminiscing I presume over all those hot-tubs and sets of patio furniture. Great. We will of course remember Meryl for her grants (amongst other things), and how the council refused to see eye to eye over several of them with the Wales Audit Office preferring to plump for the auditing skills of the Wales European Funding Office instead. It wouldn't be in the best interests of WEFO to find much wrong.

Anyway, the original motion was passed but is, again, a matter for the executive board. This was also a golden moment for our Plaid councillor Dafydd Tomos to speak up for his very rural ward of Cilycwm, be a 'strong voice' for the community perhaps, but sadly he remained silent, and has yet to speak in full council at all.

Things then took a religious turn - one for the chapel goers and lay preachers amongst the members, of which there are quite a surprising number. Cllr Alun Lenny (Pl) put forward a motion to celebrate the 300th birthday of William Williams Pantycelyn, the Llandovery hymnwriter. Clearly this had a much better chance of getting on the agenda than his previous Motion before Christmas.

There was a lot of enthusiasm and they just about managed to stop themselves bursting into a rendition of Bread of Heaven. It even brought Llandovery's Ivor Jackson (Ind) to his feet, for once, to call for a statue to be erected in Llandovery. Pity he never got to his feet to oppose the closure of the town's secondary school, named after the great man, or even to oppose car parking hikes in this little market town. Or anything else. He's standing down in May as well. Good.

There was a lengthy debate on the budget but essentially it became a straight split with both sides focusing on the election in eight weeks time. True to form, a few cuts have already been dropped, as I've mentioned earlier, and money mysteriously injected into the School budget which was one of the biggest vote losers. The official spin is now that the school cuts, this year, are 'cash neutral' whereas the opposition call it a cut in 'real terms'. Who knows? I expect only the schools themselves will discover the truth over the next year or two.

Plaid went for a lower rise in Council Tax than last year at 2.5%, which will appeal to voters across the board though the earlier decision to charge £48 for garden waste collection bumps it up a bit.

Labour's Derek Cundy put forward amendments to add further cash to the school budgets, save crossing patrols, stop cuts to care packages, stop the increase in school dinners etc, all of which meant a rise of 4.5% on Council Tax.  All in all a case of the usual swings and roundabouts. It was noted however that Council Tax is due to rise by 4% next year anyway. It's amazing how £500k was found a few weeks ago to commission an external provider for stress management services.
The Labour amendment, which may have proved more fruitful if each proposal had been voted on individually, was lost and the Plaid/Independent budget carried.

A few squabbles broke out during discussion of the capital budget with Labour accusing Plaid of targeting spending to boost their election prospects and Plaid accusing Labour of not reading the documents properly. Kevin Madge was worried about "that Brexit thing". You get the gist.

What should be concerning to all of them is the private healthcare 'Wellness Village' money-pit about to open up in Delta Lakes, Llanelli; millions will now be borrowed for this and other Swansea Bay Deal white elephants with the figures, so far, completely unknown. Another council project, the Museum of Speed at Pendine is currently being developed, on their behalf, part grant funded, by a company from Hereford who have just awarded a £200k contract to interior designers from London. So much for the capital programme boosting the local economy.

The full meeting, all five hours of it, can be watched at your leisure on the archived webcast.

In another pre-election dash, Monday's exec board will kick start the process to outsource housing services, I suspect the plan will be to set up a company wholly owned by the council with funds borrowed from the council. This is nothing new and Flintshire council set one up a couple of years ago. As these are commercial entities, transparency becomes an issue, as does democratic oversight and it becomes difficult to monitor success or failure. Conflicts of interest, governance and HR issues can all become problematic. It is one to keep an eye on given that they have trouble running a small country park.
The fact that this report will be discussed behind closed doors is not an auspicious start.
Posted by caebrwyn at 21:42

I'm very surprised to read you comments on the Council discussing William Williams, as you rightly say obviously they knew of William Williams - Pantycelyn due to their religious knowledge.

But for the conversation to move onto Llandovery, it surprised me as I had no idea CCC knew where Llandovery was, i assumed it was a far off mythical town 'the other side' of Llandeilo.

And as you rightly pointed out: Llandovery DOESN'T need a statue of WW, as it's already got an entire Building dedicated to the man.