I was interested to learn that the council have spent another £3m this year in exit packages bringing the total for the past three years to over £10m, paid out to 541 members of staff. The majority of this relates to low paid jobs and, again over the past three years, at the lowest pay grade, there have been 216 compulsory redundancies. A sizeable chunk though (£1.7m), was shared between just eighteen people at the higher end of the scale. Although some of these may relate to senior teaching staff, it includes two in the last financial year who left the authority sharing £235k between them.

The latest draft accounts show, as usual, the highest paid officers and their pension contributions. One surprising figure is the level of pay for the Director of Communities, Mr Jake Morgan, which has leaped from a meagre £120k per year to £134k in twelve months. With pension contributions listed as £15k and £17k respectively, there is no explanation in the accounts for the dramatic leap, perhaps it's the 10% 'uplift' for being Deputy chief executive? ..and we already have two Assistant chief executives on £100k each.
Maybe, with the chief executive himself busy with property management in Cardiff, he needs the extra help...

Due to his particularly high salary of £170k, the chief executive has his own little table in the accounts. There have been no pension contributions for Mr James over the past couple of years, well, ever since the pension-related unpleasantness with the Wales Audit Office anyway. Neither do the accounts show the Returning Officer fees which, with no less than five elections in the past three years, will have been substantial.

Only the returning officer fees for the local elections are paid directly by the council, and so will appear next year, the rest of it comes from central/Welsh government so does not appear in the accounts. In 2013, following a controversial £20k payment to Mr James as Returning Officer a political move was made to end these extra payments, it was ultimately unsuccessful.

A couple of years ago the Plaid Cymru opposition group at Cardiff Council, with a chief executive also on £170k, proposed a £100k cap on senior executive pay. The motion was defeated by the Labour administration. At the time Plaid leader Leanne Wood criticised first minister Carwyn Jones over the blocked proposal, with Mr Jones saying that although he 'deplored huge salaries in the public sector', it was a matter for the council. Ah.
Perhaps, as we now have a Plaid run council here in Carms, Cllr Dole (who, whilst we're on the subject, collects nearly twice the salary of a registered nurse and even has the brass neck to make a £20 claim for dinner) might like to suggest a similar top level cap here? Given her previous comments, his party leader Ms Wood would clearly support it and I'm sure their Independent Group friends would agree? Not.

National proposals to cap excessive exit packages to £95k still seem to be wending their way through parliament and the Welsh Government haven't even started chewing over it yet. This was the result of some obscenely high pay-offs for chief executives and senior officials in the public sector. Carmarthenshire's chief executive almost departed a couple of years ago with a similarly large golden handshake until it became clear there would be political opposition (we were, of course, heading for a general election...) For some completely unknown reason, Mr James decided to stay on a bit longer...

Extravagant public sector pay for senior officials, pretty much duplicated across twenty-two local authorities in Wales has always been something of controversial topic, and I won't even go down the accountability and responsibility (or lack thereof) road, but the only concession to 'do something about it' is now with the Independent Remuneration Panel for Wales who can make recommendations against overly generous gold-plated pay awards.

The reality however is that these levels of pay are incomprehensible to ordinary residents, including myself. How and when did this gap in pay scales reach the ridiculous proportions they have? To put it into perspective, a full time firefighter earns £29k, and even an experienced Area Manager in the Fire Service can only achieve £56k. Something's wrong somewhere and I know who I'd rather give the big money to.
County Hall remains an austerity-free zone. 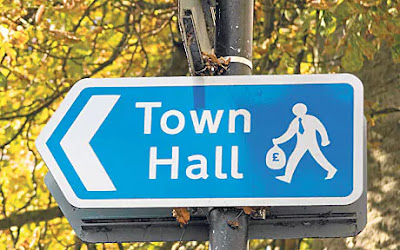 What puzzles me is what use will the planned "Wellness Village" be to the general public in Carmarthenshire.

I get a feeling that this may be something added to fat-cats salaries as a free medical system.

Also not very happy with the decision in Carms to hand over complete control to the CE. A huge mistake by the councillors.

As regards the Wellness centre read this in the Boston Standard re. the PRSA lead by Mark James. http://www.bostonstandard.co.uk/news/prsa-errors-will-not-be-repeated-1-1106951