Response from the Police Commissioner - updated

Update 16th November; I have now had a response from the chief constable most of which is the same as below. He also tells me that that the harassment warning (PIN) has expired but as he is of the opinion it was reasonably issued, he is refusing to remove the record of its issue from police systems. He is so wrong but as I can't afford to fight it in court, it looks like I'm stuck with it 'on record'. So much for innocent until proven guilty.

After liaising with the chief constable of Dyfed Powys Police, the Police Commissioner, Dafydd Llywelyn has sent me a response which can be read in full at the end of this post.

The most interesting and significant part, amongst the flannel which I will deal with below, was a little more detail on what the CPS said when they threw out the charge of harassment back in July; Mr James is a public figure and criticism goes with the job, the 'comments' were not oppressive and did not amount to a course of conduct.


When Carmarthenshire council name and shame those who have made fraudulent benefit claims on the 'News' section of their website, the same stern line is trotted out by the appropriate executive councillor;

"These offences take money from the public purse that could otherwise be used for funding essential services. It is taking money from every council tax payer.”

What's the difference? It's been going on right under their noses for years.

I have no issue with the Police Commissioner and I am grateful to him for meeting with me. I do have issue with the police and have found the whole experience to be simply unbelievable, but for now I'll repeat an observation (another observation memorably, and accurately, likened the council to a Sicilian cartel) left by the outgoing former Dyfed Powys Police Commissioner, Christopher Salmon from his list of "what I won't miss";

"The police mob. By far the majority of officers are wonderful...But there’s a strain of police thinking, present in all forces and – at least in part – at all ranks, which, frankly, still does not understand who the police work for." 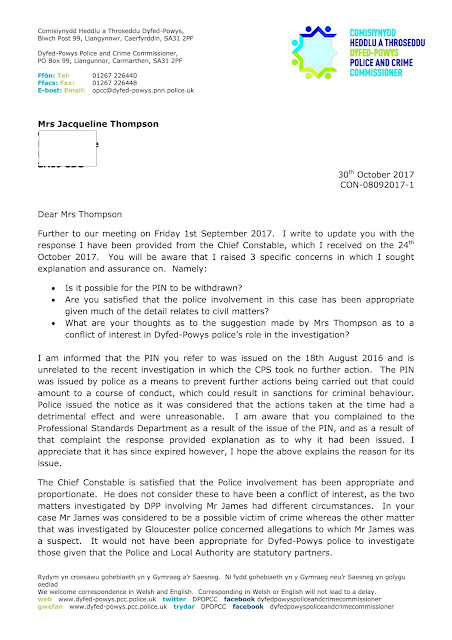 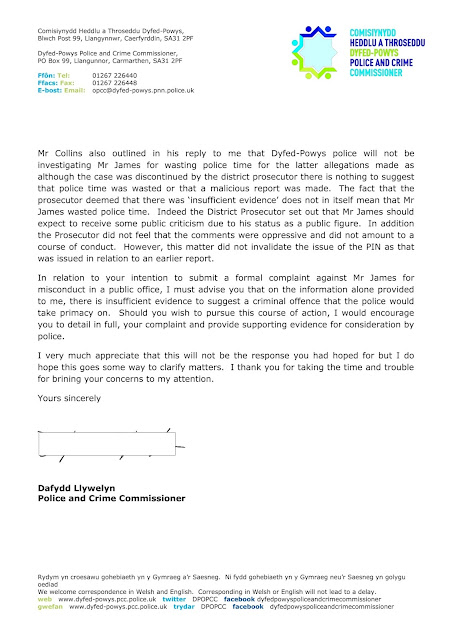 Where police commissioners are sponsored in their elections by political parties which they are members of, and the police receive a considerable part of their funding from the County Councils, the impartiality of the force is open to question ?

To be fair to the PCC I doubt if he is qualified to give advice to you on whether you should make a criminal complaint.

If you do make a complaint the Police are (I would imagine) duty bound to investigate it which will surely include speaking to you personally and gaining your considered perspective. In other words consider more than a letter that you sent to the PCC.

By the logic offered by the Police, surely at this point Mr James becomes a suspect and they should not investigate it !!

Anon 16:17
I agree and I've been seriously considering making a fully documented criminal complaint, directly to the police, since I had the letter on Monday.
I will make a decision over the next few days.

Bear in mind that forces have to abide by rules when recording crimes or deciding if a crime has been committed.

Generally the rule is if the victim or person reporting on behalf of the victim believes that a crime has been committed then it should be recorded as such.

Misconduct in public office is very serious and the DPP won't want it on the system as a reported crime. It will smell to high heaven ! If they refuse to record it as a crime ask for a written explanation then take to IPCC if necessary.

Also bear in mind that DPP is notorious for not recording crimes. HMI criticised them in 2014 for under recording by 30% so they may be a bit more ethical now.