As readers will know, the Wales Audit Office, and the Auditor General have said NO! to libel indemnities numerous times. The first occasion being the 2014 Public Interest Report ruling the bankrolling of Mark James counterclaim for libel against me by the unsuspecting taxpayer as unlawful.

After another comprehensive rejection in May 2019, the AG's final response (in full below), a few weeks ago, should be the nail in the coffin.

Here's some background;
The 2014 public report led to the clause in the council's constitution allowing such unlawful funding being suspended, but it was not removed.

The prohibition of these libel indemnities was made crystal clear in the Local Authorities (Indemnities for Members and Officers) (Wales) Order 2006. (3) being the relevant part;


Since 2014 various failed attempts to overturn the ruling have been made by Mark James and Linda Rees Jones and whichever puppet leader was in place at the time. Since June 2015 that's been Plaid Cymru's Emlyn Dole. At least one attempt was made to question the qualifications of the then Appointed Auditor to make such a ruling.

The latest round of this saga has been the astonishing attempt by James, Rees-Jones and Dole to reinstate the clause and to extend it to cover councillors. They are, in essence, proposing to expose the taxpayers to massive financial risk, the exorbitant cost of a Judicial Review and sustain the chilling effect on democracy.

This came about at a meeting of the Constitutional Review Working Group (CRWG) back in July 2018. Plaid Cymru (by now they were three years into their deal with the devil...) were very keen to reinstate the clause and, of course, clear the names of Mark and Legal Linda. It was decided however, and before they did anything rash, that they better seek the opinion of the Auditor General, Adrian Crompton.

Anyhow, nothing moves very quickly in local government, so six months later Linda Rees Jones wrote a lengthy begging letter to the AG, this letter was disclosed to me by the Wales Audit Office.

In May of this year, after seeking external legal advice, the AG replied, soundly rejecting the arguments put forward by Rees-Jones and warning them of his powers to launch judicial review.
That letter can be seen in full here.

Instead of taking the AG's response back to elected members, as promised, Ms Rees-Jones under the instruction of the then employed Mark James, wrote back to the AG in a last ditch attempt to change his mind. This time she added a veiled threat to go back to the Welsh Government with a view to override his opinion. That letter can be seen here.

To bring us bang up to date, the AG responded on the 29th November.

It was another shattering rejection, and this latest letter, disclosed by the Auditor General under FOI, can be read in full here; 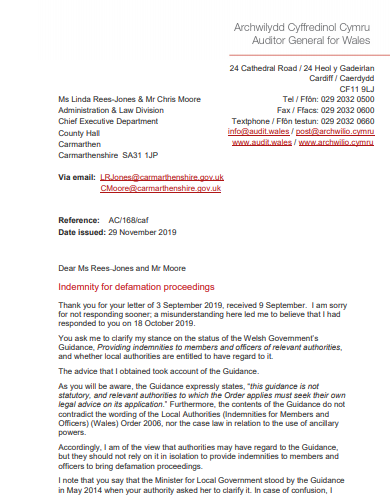 Without going into the finer legal points (all of which are on this blog, here there and everywhere), the AG has succinctly rejected their entire argument, and on multiple occasions.

It now remains to be seen if Ms Rees Jones will admit liability and allow councillors to remove the clause completely or will she carry out her threat (along with Mark James, lurking somewhere) and try and appeal to the Welsh Government to save their skins. At continuing great expense of course.

Interestingly, the AG has also taken the time to have a look at the 2014 Minister's letter referred to by Rees Jones. At the time, many observers, and significantly the Plaid opposition councillors, were amazed by Mark and Linda's deliberately twisted interpretation of the letter. A child could see through it.
Far from giving them free rein to carry on suing with public money, as the two of them claimed, it did nothing of the sort. The First Minister had confirmed the Welsh Government's stance that the indemnity was unlawful the day before the meeting.

Surely this latest confirmation from the Auditor General marks the end of the road for Carmarthenshire Council and its unique and illegal approach to libel indemnities.

And incidentally, you'll note that Chris Moore, the council's chief finance officer is also a signatory in the correspondence. Under the illegal indemnity clause he also has the delegated power to instigate libel proceedings. However, wearing his finance hat, he has just recommended £5.2m of cuts to services next year and a 4.89% increase in council tax. But, well, I suppose you've got to find some way of funding slush funds, they don't come cheap...

Ms Rees Jones, and indeed Mark James must admit defeat and accept liability for deliberately misleading councillors, the public, and the High Court. They have both lied and cheated the taxpayer, and James' behaviour has been fraudulent, dishonest malicious and criminal. He has not repaid the illegal indemnity nor, for that matter his unlawful tax avoidance payments. Nor has he been held to account.
Not yet anyway...

Rees-Jones legal advice in general must be called into question as a large proportion of it has been for the sole purpose of covering-up for the misdemeanours of Mr James. From defending his very own slush fund to undeclared interests and lying to his employers. Had she had a shred of honesty, self-respect or professionalism Mr James may not have got away with his shameful, vindictive and illegal behaviour.
That's without the fact that he managed, almost single-handed, to destabilise and all but destroy the Swansea Bay City Deal. See, for instance, this post from June.
We still await the outcome of that criminal investigation.
They both should have been sacked years ago.

As for the Reverend Emlyn Dole, he should resign, hang his head in shame and crawl back to his chapel and beg for forgiveness. As I said earlier this month, the rotten legacy left by Mark James is nothing for Plaid Cymru to be proud of.

And good riddance - we earnestly hope.

It's about time that Legal Linda was sent on her way

I am surprised she hasn't been suspended...

I have sent Linda Rees Jones the following email;

"...Will you now refer the two responses from the Auditor General to CRWG, or full council, for discussion, and with an officer's recommendation that Mark James' indemnity was indeed unlawful, as was the clause in the constitution? And that it was, in fact, nothing more than a slush fund?

Will you also be informing councillors that both you and Mark James have been deliberately misleading elected members and the courts for years over this matter? And that you have both cost the council a small fortune in defending your indefensible positions? I would expect you to resign with immediate effect and admit that your Witness Statement provide to the High Court for the libel trial was untrue and you knew it to be untrue at the time.

As I have said in previous correspondence, I will do whatever it takes to seek justice and accountability for the illegal and vindictive actions taken by both you and former chief executive Mr James throughout the libel litigation, the subsequent enforcement proceedings and all associated matters."

I have yet to receive a reply.

Good luck with this excellent campaign for justice and accountability