Several people have contacted me after noticing Plaid Council Leader Emlyn Dole's purpose built holiday home, complete with hot tub advertised on Airbnb, etc. There's nothing like a quiet Welsh getaway in the middle of a pandemic of course, presumably there's plenty of bookings from far afield! 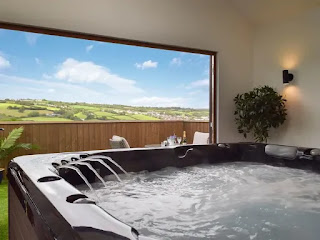 The story behind this lucrative little earner down on Fferm Capel Ifan, Pontyberem, was a typical Carmarthenshire tale of shady nonsense, earning him the title Emlyn 'two barns' Dole, and the usual media quote, a la Mark James, that he'd 'done nothing wrong'. As is usual in these circumstances, the planning applications were all in his wife's name. 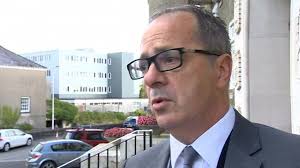 Cllr Dole, BBC Wales
Planning was originally granted in 2012 to sympathetically convert the historic 400 year old barns into a tanning salon and holiday lets. However, the 'conversion' went a bit further than was allowed, in fact it went from this;

Planning enforcement stepped in and eventually, in 2015 as there was bugger all left of the historic barns, new applications had to be made. There was even an unpleasant question mark over the Mr Dole's re-use of the original 2012 Agent's report. The original agent was, in fact, no longer acting for him and was quoted as saying;
"Judging by the evidence, it appears Emlyn Dole is not playing the game everyone else in the county has to play, which is going through due process".
As this was now a new build in open countryside, planning officers recommended refusal.
Meanwhile Emlyn carried on with the, er, 'conversion', without the proper planning approval, flagrantly ignoring planning rules. It was now a retrospective planning application.
Not to be outdone by pesky planning officers in his own authority, and by now, enjoying his position as leader thanks to Mark James, the application found it's way to the Planning Committee. The dutiful Committee kindly made not just one, but two trips to see the crumbling heap on the deeply un-material planning basis that it had been 'in the press' and the 'sensitive' identity of the applicant.
Eventually, enough backs were scratched on the charabanc trips to Pontyberem to ensure it was passed by a majority, against the recommendation of Emlyn's own authority's planning department. Mark James ensured Dole escaped from the fiasco unscathed, in return for a few favours and u-turns as Leader. Most crucially by declaring his new-found support for illegal libel indemnities. It's how things work.
So there we are, 'Y Beudy Bach' has even got it's own shed with a hot tub, not sure if planning was required for that as well but what the heck, there's got to be some perks as leader! Trebles all round, as Private Eye would say!
---------------------------------
For those losing sleep over whether former chief executive Mark James is struggling to make ends meet, what with the police investigation and all that, scratching by on his pensions and Caebrwyn's monthly gutter money, worry no more. Not only are his companies, Cardiff business interests, (undeclared when he was in post) and property portfolio (including mine), flourishing, but his new consultancy business, of which he has the controlling interest, is showing a relatively healthy balance sheet with £70k in profit, well profit he has declared anyway.
Not bad considering Ffynnon Consultancy is in its infancy, has no website, contact details or, well, anything.
Still, with the contacts made during his County Hall dictatorship and the inside knowledge of everything from the City Deal, pilfering public funds, to tax avoidance, he doesn't need to advertise.
One can only speculate what they're paying him for.
Posted by caebrwyn at 21:40

The main problems with rentier capitalism are twofold. First, rentiers are inclined to sit on and sweat their income-generating assets, rather than innovate; it is a recipe for economic stagnation. And second, because incomes accrue disproportionately to the asset-owning elite, it is an engine for growing inequalities of both income and wealth.

How this helps people get on in Carmarthwenshire is hard to work out - perhpas two barns dole hires a cleaner !

the thesos of a rentier is summed up best here :

Anon 11:33
I wouldn't know...though according to the advertising blurb, after you've driven all round Carms (there's parking for three cars), in a Covid-aware manner I presume, the adjoining salon offers a "range of beauty and hair treatments...to ensure your stay is a calming and relaxing one!"
One can only hope it's not the Rev Dole administering the pampering sessions....

How is it possible that Emlyn Dole is still in post as Plaid Leader of Carmarthen County Council? Is this the same person who on the steps of County Hall calling for the public to comply with Coronavirus restrictions?Was planning requested and granted for this holiday let and associated hot tub? It is not as if there is " no History " with this complex. Caebwryn Thompson has covered the whole saga at "Plas de Dole" comprehensively over the years and makes for some very interesting reading. It is very clear the adherence to the ministerial code and lack of consistency in planning matters should be a matter of public concern .At a meeting with Adam Price (The leader of The Plaid Party) a requested was made by a local constituent of his that he should question E.Dole with regards to his actions over along period of time in allowing many breaches of planning that had badly affected the local constituent. Adam Price response was that he could not be seen to influence the actions of Council Officers. The past and present actions of the Leader are bringing The Plaid Party into disrepute. Adam Price is seen regularly on various media platforms criticising both the Welsh Government and Westminster but surely his first concern should be with his local constituents?

Have the Council investigated if the highway conditions have been met on the retrospective planning for the barn rebuilding. having looked at the Planning approval have the visibility splays been constructed and has the second entrance been blocked off(not by a gate). I know this has been reported to the enforcement officer,has he done anything about it?

Anon 21:35
Yes these concerns about the Conditions were reported to planning enforcement in February. I asked for an update last week but I'm still waiting for a reply.

Emlyn might need to take a soothing dip in his hot tub prior to Monday's Exec Board meeting as the agenda shows a current predicted overspend, mainly due to Covid losses and extra expense, of £7.4m.
Elsewhere on the agenda the latest figures for council borrowing show a massive £433m debt, costing £17.63m per year in external interest payments.

Our old favourite, the Wellness Shed puts in another Exec board appearance under its £25k rebrand name, 'Pentre Awel'.
Remarkably, given the grim history of this City Deal project, and the public cost, it's being discussed behind closed doors.
Regular readers will be aware of the details of the grim history, and the ongoing police investigation.

Also on the agenda is the Mutual Investment Model agreement to build schools. It appears that all local authorities seeking Welsh Government cash for Band 'B; schools under the 21st Century school build programme must enter this public/private partnership. Essentially these are PFI schemes. The Welsh Government have selected the Paris based global consortium Meridien as the private partner.

Oddly, the Exec Board have decided to discuss this in secret too. Fortunately, google informs me that other Welsh councils have happily made their reports on this same item available for all to see.