As The Herald reports today, shortly before Cllr Emlyn Dole (Plaid) unexpectedly became council leader, promising to guard the heritage of Carmarthenshire and bring in a new era of transparency, he became embroiled in an interesting planning hiccup down on the family farm, Capel Ifan, in Pontyberem.

A planning application was approved in 2012, in Cllr Dole's wife's name, to convert a double barn at the farm, into a hairdressing salon and holiday lets.

According to the officer's report, the farm could trace it's roots back several hundred years and "was recorded as belonging to the Dun Lee family in 1613 and Rudd family later in the 17th Century, so the barns have some historic interest" so the structure of the barn and its unique charm was to be preserved. According to Dyfed Archeology one of the barns was four hundred years old.

Work began on the conversion but at some point as the barn went from this;

..as the work continued, it eventually drew the attention of planning enforcement as it did not comply with the original permission, and the conditions had been ignored. There was now precious little left of the unique charm, historic setting, or anything else.

To try appease enforcement, another application was submitted which was largely based on new build.
This time the planning officers recommended to the committee, upon which Cllr Dole sat (with, I add, interests duly declared) that the application should be refused.
The new proposals were completely out of character from the original buildings and environment, and clearly against council planning policy.

Then the usual happened, a site visit was called for and last November the Magical Mystery Tour headed off to Pontyberem. The convivial group returned to the warmth of Chamber in the afternoon and, true to form, granted permission, contrary to the recommendation.

The Herald has spoken to the agent, a Mr Davies, who acted for the original application. He was not involved in the subsequent developments and is not best pleased that his name still appears on the later documents.

He also said that the structural survey which identified the barns as structurally sound was ignored to 'facilitate demolition'. Cllr Dole, or rather his wife, had argued that the demolition became unavoidable, but the agent is clear that he never saw a second survey to that effect.

The Herald asked Cllr Dole, or should I say Reverend Dole (for he is also a Preacher) to answer the allegations made regarding the planning process.

They asked whether permission had been granted for demolition, he replied that "demolition was undertaken with regards to safety and structural integrity of the building". A simple 'no' would have been a more honest answer.
He would not confirm the identity of the agent, or any changes of agent, just that the information was 'online'.
He also denied allegations that grants had been received 'in relation to works at the property'.

"Judging by the evidence, it appears Emlyn Dole is not playing the game everyone else in the county has to play, which is going through due process.

“When I see in the papers he is bringing transparency, it makes me ill.”

A local resident also spoke to the Herald;
“It looks like one rule for him and one for the rest. Everyone round here calls it ‘Southfork’ because that’s what it looks like.”

In my opinion, the whole thing stinks. 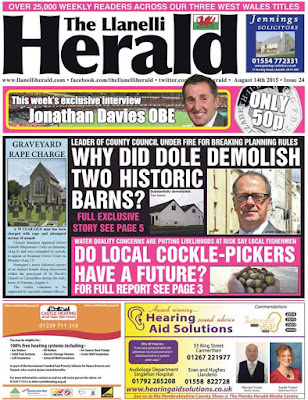 The article is not yet online but the Carmarthenshire and Llanelli Herald websites can be found here and here and also on Facebook.

Emlyn Dole, when on the planning committee, was one of the few to question the logic of recommendations put forward by officers, and appeared to be trying to get it right, so his answer as to why he went ahead and took the building down (with just enough left to allow a rebuild?) without due process appears surprising.

If I remember the planning meeting correctly, the reason the building was taken down was because the owner thought the pine end was unsafe and had concerns for the owner's grandchildren's safety. ( I think this was put forward by the local councillor).

At the time, watching the meeting, I remarked I thought it was excessive to take down a whole building and install a new slab without permission because of the state of one pine end. (As a member of the public I had no idea at the time that councillor Mr. Dole was the owner.)

I think Mr. Dole would be wise to say he got it wrong and do the right thing promptly -- based on what I have read, his reputation in my mind has been tarnished.

It's business as usual at county hall then.

Thank god for the Herald !!!

They lurch from bad to worse to worse still!! Perhaps Cll.Dole should now be rethinking his suitability as 'Leader'.

How can anyone have any trust in a man who is so clearly not opposed to 'whatever it takes to get what I want'.

If you read the officers' report on the reasons for refusal they seem clear and watertight to me, so the planning committee who must have read them in their course of duty, seems to have taken an odd decision in approving planning.


I think in the case of councillors -- even if they declare an interest and are not present on the planning committee -- if they have a direct interest in the outcome and obviously know all the other members of the committee, one would think quite well, on these occasions an independent body should make the decision.


Interestingly, it appears that a reason for putting the decision to the planning committee was because the applicant was related to a planning committee councillor. If this had not been the case, it might have been done under delegated powers and most certainly been refused.

God helps those who helps themselves !

When the Barns were built there would have been few if any motor vehicles on this road. The entrance is hidden from the view of any traffic coming from the direction of Ponthenri and only seen after coming over the brow which, should a vehicle be emerging, would force motorists to put on the breaks and/or take avoiding action. To allow a new commercial business to set up with the entrance in a "blind spot" is totally irresponsible. Where else would the planning allow a new build (that is what this is) to be built so near the edge of a busy highway and so close to the brow of a hill as to be a constant danger to motorists and customers emerging from the premises? There is also no pavement. The whole thing stinks! I travel this way a great deal and am aware of the farm and it's entrance and slow down below the 40mph limit; just in case. Even when the original planning consent was given it should have entailed constructing an entrance further from the brow of the hill allowing the new business customers having a much safer way of emerging onto the highway. Pity there was not a more recent picture as the new build can be seen as being too close to the road for this day and age. Things were different at the time the barns were built. Personally people who abuse their positions when supposedly working in the public interest need to be held to account. I had hoped Plaid would start to change the culture within the CCC but this and the failure of Plaid to question the way officers ignore whistleblowers disclosures and fail to follow POVA, Complaints (especially the Statutory Social Services Complaints Policy) and the Whistleblowing Policies Plaid proves our representatives (maybe not all) put their own self interest before the public interest or safety. Plaid holds a lot of sway in Pontyberem as does Cwmdaethas Y Iaeth Cymraeg who I believe went against the pulling down of an old building set close to the edge of another road and which is also a danger because of visibility problems. Planning is allowing the removal of this one and any new construction will have to allow plenty of visibility for emerging traffic. These barns were even older yet they seem totally happy with there destruction for what appears to be spurious reasons; especially as they had been deemed sound when first the request for a change of use was put to the CCC. Would Cwmdaethas Y Iaeth Cymraeg have stayed so silent had the owners of the farm (with the Barns) not been related/Plaid?

I made a blunder when I said I believed Cwmdaethas Y Iaith Cwmraig. It was the Pontyberem Community Council who felt, as the building (Barn/Outbuilding) was old, CADW should be consulted. I was getting a bit mixed up as one of the Community Councillors is connected to Menter Cwm Gwendraith (which I thought was connected to Cwmdaethas Y Iaith Cymraeg) and to the applicant concerned with the Emlyn's Barn shenanigans. Maybe the Community Council could suggest an investigation into what took place (the destruction of very ancient barns) especially as originally the permission for the new business plans was given to safeguard those barns and allow the owner to profit and not lose out while having to maintain them. Hope Cwmdaethas Y Iaith Cymraig will accept my apology!

What does the planning permission say? It depends on the wording and quite often it will have been badly drafted. Although he should adhere to the policies he may have voted for I can't for the life of me work out why we are so obsessed with old buildings which have outlived their usefulness.