A brief post just to mention that Lleisant Delta Wellbeing Ltd, one of the arms-length companies wholly owned by Carmarthenshire Council has narrowly avoided being struck-off from the Companies House register.
Delta Wellbeing Ltd was set up in 2018 as the council's social care call centre and employs around 60 people.
Their latest accounts are over two months late, hence the compulsory strike-off action published on Tuesday 1st June.
The action has now been discontinued, presumably the council woke up and responded with some sort of excuse. 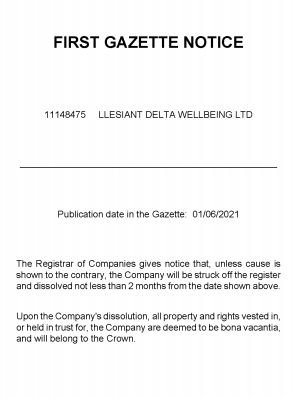 This is a shambles by any standard. Questions need to be asked about what has been going on here...where are the accounts? Why did the council came so close to losing the company, and, more to the point, the jobs of sixty staff.

Unsurprisingly there's precious little oversight of any of the council's companies apart from the occasional decision to chuck a few million their way and hope for the best. Not very sensible given this council's track record, and particularly as they were set up during Mark James' reign where his priority was to help out his mates and fill his own wallet.
The other companies are Cwm Environmental Ltd which run the waste services (see previous posts) and Cartrefi Croeso in charge of housing and construction. Egni Sir Gar, the energy company is a 'mutual' so not even the accounts are freely available. According to the mutuals register, the last set of accounts were submitted in 2017.
There was no explanation why one council official, Gareth Miller, was made a director of their housing company Cartrefi Croeso in July 2018 but wasn't registered on Companies House until January 2021, two and a half years later.
The main problem, as ever, is a lack of transparency and scrutiny. A quick google search of council owned companies show how things can sometimes go horribly wrong, but by then, it's all a bit too late. The same can be said about the Wellness Village scandal, no one knew, or cared what was going on until the whole thing collapsed in a pit of corruption, with Mark James' hands caught firmly in the till.
Posted by caebrwyn at 22:40

They've a track record of not following Companies House rules and the underlying law of the land:
https://www.whatdotheyknow.com/request/articles_of_association#outgoing-848011

The staff either don't know what they are doing, or don't do anything! (pretty damnong whatever way youn look at it...,)

I'm sure the frontline staff are hard working, I'm not certain about the business structure. As usual it's the lack of democratic oversight and public transparency which is the problem.

This story has now been reported by the local press.

The excuse given by the Council's Director of Corporate Services, Chris Moore, for being over two months late filing the accounts was, you've guessed it, the "pressures due to the Covid-19 pandemic". They are, apparently on their way.
This phrase is becoming a very convenient excuse.

For this to have reached the point where Companies House had to issue a First Strike-Off Notice is appalling.

This isn't a small business struggling to keep on track of things during adverse circumstances, but a large County Council with it's own regiment of accountants.

On the other hand, Chris Moore, along with Linda Rees Jones made sure that the illegal slush fund provision was safely preserved by October last year.