As the former Council leader Emlyn Dole has featured many time on this blog it would be remiss of me not to say a few words after he lost his seat last week. The vote was close but went to a fellow Plaid candidate rather than poor Mr Dole.
Congratulating the winner through gritted teeth, he was clearly humbled by the experience, and more so, the loss of fifty grand a year plus perks.
When Caebrwyn started following the goings on at Carmarthenshire Council Mr Dole was in opposition. He and his Plaid colleagues were very vocal, and at times quite rude, about the terrible way that the then Labour and their Independent colleagues were running the show. The things they said about the former chief executive would have made a judge blush...
Aside from their criticism over secrecy, bad governance etc etc and the way the administration (Meryl was in charge in those days) bowed to senior officers, Plaid's big moment in opposition was the unlawful payments scandal.
One by one they said how terrible it all was, they called for votes of no confidence and senior Plaid politicians even called plod to investigate the "dictator" chief executive. Shocking!! Using public money to bring libel cases against members of the public was not only unlawful, they agreed, but the sign of a morally bankrupt ruler, a slush fund.
Emlyn Dole, however, appeared to be a little wary of Mr James. He had obviously realised that if ever he managed to climb the greasy County Hall pole, his position in power would be entirely dependent on the whim of the chief executive. He didn't want to become the subject of one of James' infamous 'dossiers' looming on the shelf of the presidential suite...
A fine balance had to be struck. By 2015 Mark James, and Meryl, had grown weary of Labour leader Kevin Madge and felt like a change. As did a faction of the Labour group led by Jeff Edmunds who sent poor hapless Kevin packing. Meryl and Mark, however, were not so keen on Edmunds.
He'd rattled James a year or two before by spilling the beans over one of his dodgy Scarlet's deals.
And also, there was no better way to silence a critical opposition than to offer them the pretence of power
So, with James' approval (the Rev Emlyn was, like Mark James, a religious man, apparently), Meryl decided she wanted Emlyn.
Emlyn, meanwhile, had a little planning issue developing. The conversion of a four hundred year barn into a tanning salon and holiday let (the application was in his wife's name) had become less of a conversion and more of a full scale demolition. 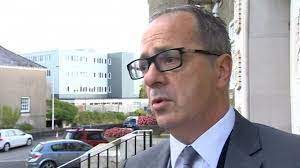 To cut a long story short Mark James smoothed his path out of trouble, the planning committee duly obliged and nothing more was said.
Mark James, naturally, wanted something in return for all this. And for giving him the job of leader. The price Dole paid was to u-turn completely on his condemnation of the slush fund. Suddenly there was nothing wrong with it. Nor the chief executive, who, according to Emlyn had rays of sunshine shining from all sorts of places.
Emlyn went further. Even as recently as last year he, along with the head of legal Linda Rees Jones, was trying to get the slush fund clause back in the constitution, and to extend it to senior councillors like himself. The external auditors were having none of it. However, it still exists and now languishes as a power of the Cabinet. I dare them ever to use it again though. Well, Emlyn certainly won't be.
Also rumbling along shortly after Dole became leader was the now infamous Wellness Village and the City Deal. In 2016 Mark James, (along with Marc Clement) ensured that Emlyn's Cabinet gave an exclusivity deal to Kent based Messrs Dickmann and co to develop the project. The deal evaporated and the company dissolved. Only to reappear a year later under a different name.
We all thought it was a little strange back then how a company with no track record and in £137k debt was going to cope with a £200m project. And why Mr James was so determined they should have the contract. We now know why. Just a little matter of bribery.
Didn't Emlyn wonder what was going on? Who knows... 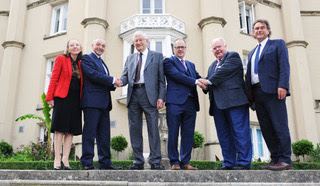 The corrupt 'Wellness Village' deal
By late 2018 the whole sorry mess was exposed, via Swansea University, and the police had been called. Mark James had no choice other than to plan his escape, so announced his 'retirement'.
Emlyn still couldn't say a bad word about Mark. Plus, of course, he had become Mark's 'Meryl', the democratic rubber stamp for his dodgy deals and, well, criminal behaviour.
Emlyn was also, thanks to the regular appearances of Mark James, starting to get a mention in Private Eye's Rotten Boroughs column, not a good sign.
In June 2019, with City Deal nearing collapse, thanks to Mark James, and the organised crime squad beating a path to County Hall and James' front door, Emlyn outshone himself, using James' retirement to wax lyrical of the great man. Even elements of the Plaid group were squirming in their seats, it was deeply uncomfortable even for them. James of course waxed equally lyrically about himself. Both of them took a swipe at bloggers.
A couple of weeks later County Hall and James' home were raided.
Then, in mid-pandemic, there was the sorry business over THAT sign. Emlyn decided that motorists required an expensive arty 'gateway' sign alerting them to the fact they were entering Carmarthen, it turned out to be a shoddy, ill-sited collection of tin plates costing an eye-watering £136,000.
The last time I saw it half had blown away in a storm, and the rest of it had white paint daubed all over it. Emlyn's folly it certainly was.
Let's not even mention that 'Tywi Valley' footpath which has gone around £12m over budget....or the millions Dole has ensured pours into the pockets of consultants planning the Wellness Thing, now called Pentre Awel.
Plaid, with 38 seats have a narrow majority of one. Labour have 23 seats and the independents 14.
Caebrwyn, by the way, came third, even behind the Tory, so I can't say much about election success...:-)
Plaid have picked Darren Price to replace Emlyn Dole. I understand that there are some sighs of relief amongst the Plaid ranks that Dole has been finally kicked into touch. I am of the view that he should have gone at the same time as Mark James.
As Plaid have a majority Price's appointment as leader of the council is likely to be ratified at the council's AGM later this month. He was re-elected as the member for Gorslas and works as a researcher at Welsh Parliament. He can, I have noticed, at least string a sentence together.
We'll see how it all pans out. Expect some spiky exchanges between Price and Labour leader Rob James.
Caebrwyn will be dropping Mr Price a line in due course, over several issues...
Meanwhile, it's farewell Emlyn...enjoy your hot tub, call it a perk of the job.
Posted by caebrwyn at 10:50

What can one say except "The Reverend is now Irrelevant", An overthrown Plaid Leader of Carmarthen County Council. How many people will be overjoyed by his departure? Here was a person who declared when he was appointed to the post that under his Leadership the Council would be the most democratic and accountable in the country.As with so many politicians of ALL political persuasion these pre election announcements are just headline utterences that turn out to be nothing more than empty promises. We can but hope that Darren Price will lead the Council in a way that serves ALL the constituents and NOT just the favoured few!

Following the recent elections, independent councillor Louvain Roberts who was until the election, the Mayoress Elect for llanelli town council, has now been ousted. Mrs Roberts was previously a labour member but a couple of years ago, she left the party along with 4 other members due to bullying. Her ousting happened 1 week before her ratification as Mayoress. Labour who are now in control have announced her replacement with Phil Warlow (Labour). Llanelli Town Council and One Voice wales have said this is legal but independent legal advice suggests otherwise. Regardless this is typical of labours tactics.

Anon 10:17
Independent candidate Sean Rees was elected to the county council alongside Ms Roberts, as it was a two seat ward. He has some background too, once a member of Plaid he was also unceremoniously ousted as Plaid's candidate as MP for Llanelli. After local man Rees won a hustings vote for selection, Plaid decided to parachute in Cardiff-based Mari Arthur instead. Rees claimed that there was a smear campaign against him and left the party. Ms Arthur ended up coming third in the election.

Any news from the police on the Mark James investigation?

Thanks for the link.

This has the potential to be very interesting as the evidence relating to their dismissal, which ties in with the police investigation and Mark James' involvement, will be in the public domain.

The police made it clear that they had evidence of criminality, the CPS dropped it because a key witness Franz Dickmann was deemed too ill to testify.

They were all guilty as sin and they all know it.

I guarantee it's not over yet for Mr Mark James, I'll make sure of that.

The tribunal continues with Marc Clement under cross-examination today and tomorrow from the QC acting for the Uni. See my Twitter feed for the latest news reports. Clement is getting destroyed.
He's calling the ex vice chancellor Richard Davies as a witness, but not, the news report states, Mark James. My guess is that given the 13000 pages of evidence in the tribunal bundle, and the fact that he was in up to his neck, James doesn't fancy being publicly skewered by the QC...