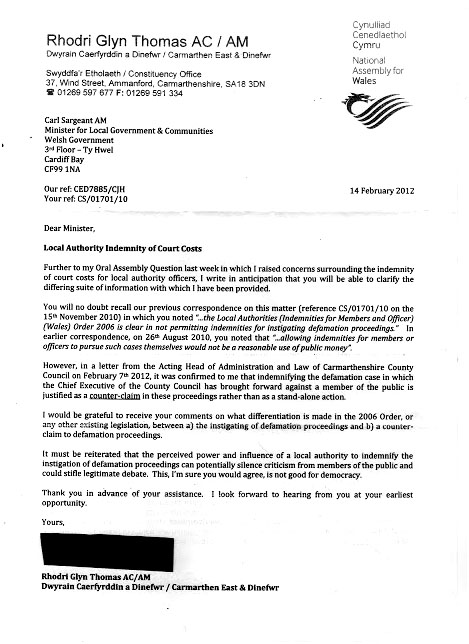 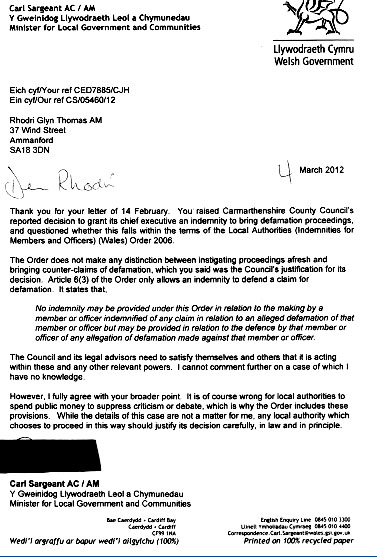 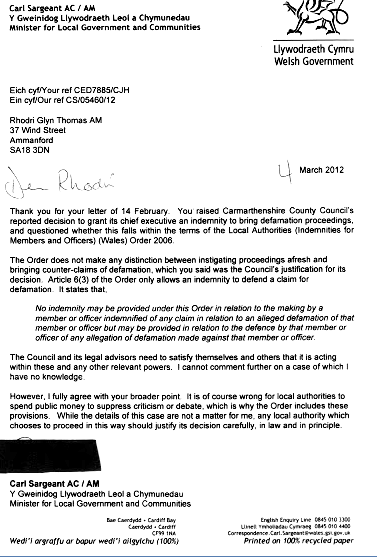 Like in so may other matters, Carmarthenshire thinks it can make it up as it goes along and because it wants something the be so, it automatically is. Pure arrogance and intimidation of the voices of opposition. Ceaușescu will be applauding in his grave...

The problem with this of course is that if it's not Carl Sargeant's job to actually respond when the council are not (or, more accurately, possibly not) sticking within the law, then who the hell's is it?

It's all very well saying they "should justify this position carefully, in law and in principle" when the council take the decision from behind closed doors, and their justification to the people at large consists in it's entirety of "Exceptional Circumstances, Guv..." - but who the hell is going to do anything about it?

I've publicly stayed out of this topic, but this drives me mad. I don't really have a problem with the council financing the DEFENCE of a member of staff, but to actually fund a claim of defamation is totally unacceptable.

We have to assume that the council and its legal advisers have "satisfied themselves" that they are acting within their powers - although the Minister's reply makes it clear that the 2006 Order gives them no power to bring a claim. As for satisfying "others", that must surely be taken to mean us, the tax paying public, and our elected councillors. Neither group has been consulted or given the facts. Worse than that, the council leadership has made sure that no discussion or scrutiny has been allowed.

So when the Minister says that these mysterious "others" need to be satisfied that the council is acting within its powers, it falls to him to ensure that that happens.

I have to agree with Anonymous. We're subject to the will (or lack of it) of the puppets and the apathetics. I'm tempted to say "We're all doomed" but I must believe we aren't and eventually the sh*t will hit the fan and many people will be rightly in-turd, just as it did elsewhere and resulted in the phone hacking scandal being exposed as we speak.

I have asked many times "why do we have a Minister in Wales for Local Government when he constantly tells us and our A.Ms that he has 'no powers to intervene'. I have been told this so many times in correspondene I could make a papier-mache statue of him with the paper it's written on!! This position is clearly not fit for purpose! If the Minister cannot comment on this case because as he says 'he has no knowledge of it' "then get knowledge of it"! Something needs sorting out here in Wales!

Why do we have a Minister in Wales for Local Government? Because it SOUNDS good. Job Titles and non-jobs mean everything, especially here in Wales. That's how Wales has jizzed its way through £nM of EU funding to be worse off than we were when we started. Where's the money gone? I'll tell you where its gone! - Bloody houses, posh cars, foreign holidays, not to mention fuel and accommodation for attending countless bloody meetings (pointless bloody talking shops for waffly twats who should be behind their desks doing some work rather than just friggin' talking about it) for those holding the non-jobs!
Ooo, I do get cross when I think about it sometimes.

great comments, how refreshing, what a pity local papers do not print. Perhaps the council's Carmarthenshire News should do so as every one of us get that shoved through the letterbox.

Indemnity? Indemnify/ I doubt whether they can spell those words, leave alone understand what they mean, in County Hall!