Another interesting Item on the agenda for tomorrow's full council meeting (apart from the vote on public filming of course) is the Standards Committee Annual Report. The report in itself is not exactly searching, the usual gloss over of Ombudsman stats, but perhaps some Members will seize the opportunity to ask a few searching questions. The Planning Department and Social Care have both recently received damning reports, not forgetting the £3000 fine over Mr M's case back in January. The Ombudsman's wholehearted rejection of the Chief Executive's attempts to censure Cllr Caiach was not a particularly proud moment for the authority either.

In fact there's quite a lot to reflect on this year. The Leader, Cllr Madge is being investigated over the Sainsbury's press release which brings into question the integrity of the press office to deliver apolitical news.  In fact the press office, the propaganda arm of the regime (elected and unelected) has had quite a year threatening local papers and ensuring that the £148,000 propaganda council rag will remain unscathed after the budget; who cares? Let's lop £66k off the after-school clubs and nursery groups instead!

And who could forget Meryl's 'Mark and I' gaffe back in April? I doubt if it's warmed her to the charms of You Tube. It certainly didn't warm her to the 'rabble'. In fact there's a growing movement in Llanelli to separate itself from Carmarthenshire Council altogether, who can blame them? I'm thinking of polling the residents of Llanwrda to see if they'd like to join the resistance.

The senior management have also been kept busy either refusing to take part in, or putting a size 10 in, various media programmes. In the spring S4C's Taro 9 showed the unfolding mess behind whistleblower Delyth Jenkins complaint about abuse in a day centre. The council's input was apparently limited to having the police follow Delyth and the BBC film crew. The next in the series was BBC Dragon's Eye investigating the council funding of the evangelical bowling alley,  followed later on with BBC Week In Week Out' s report on the Breckman planning case, They broke their silence though a few week's ago with a size 10, this time on BBC Radio Wales calling a retired schoolteacher and a town councillor who were taking part in a discussion about the perils and nonsense associated with the public gallery as disingenuous liars.

Of course we can't forget that there was actually an election in May.  Or perhaps we have. Did it really happen? Remember the weeks of backroom deals and promises? The whole thing went full circle and we were back were we started, an Executive Board unwaveringly loyal to the ruling officer group and a collection of councillors silenced from uttering anything other than tributes to the politburo.

The council's relationship with the local press is something that has been troubling the Carmarthenshire bloggers for some time, for years in fact, and as Cneifiwr reports, things could be reaching a crescendo. I would like to think, for instance, that the South Wales Guardian remained defiant after the July threat with their front page the following week picturing the Executive Board juxtaposed with an interesting headline, who knows; 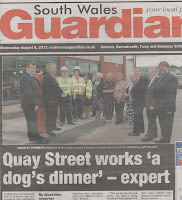 Anyway, the show lumbers on, untouched it seems by either Government or watchdog, to any meaninglful degree anyway. Even the DVLA has had enough. Regeneration continues, largely at the long term expense of the taxpayer and the long term profit of multi-national chains.

My campaign for transparency reaches a significant moment tomorrow with the vote on filming - it will be interesting to see who has been whipped into shape, and who has decided to do a bit of Christmas shopping instead. Whatever happens, it'll take more than me and my mobile phone to bring this council into the 21st Century.

And a final word of support for the Unison members who will be protesting on the steps of County Hall tomorrow for a living wage for low paid council workers, currently earning a thirteenth of the salary of the Chief Executive. The rich man in his castle and the poor man at his gate......
Posted by caebrwyn at 18:28

Following the most recent correspondence received from Cardiff Bay, I don't think the situation I have highlighted can continue for much longer without some kind of changes. That is my interpretation of what I read anyway.

It was interesting to see yesterday that the Government published its final report into the events at Winterbourne View in Bristol where vulnerable people with learning disabilities were so appallingly treated.
The report states that "When such failures happen there should be consequences for everyone involved.
The plan to change the law will mean Boards, Directors and Managers who run Hospitals where abuse happens will face consequences. This will send out a strong message to Boards, Directors and Managers that the care and wellbeing of people they care for is their responsibility". This should not just happen in England but should be introduced as law in Wales too. There must be accountability at the highest level otherwise lessons are not learnt.