County Hall is now, without a qualm, of using the taxpayer funded council website to take a further swipe at our defiantly independent South Wales Guardian and it's editor Mike Lewis; http://www.carmarthenshire.gov.uk/English/news/Pages/SouthWalesGuardian.aspx
Is anyone going to stop this?

Update;
The council have provided a statement to the BBC in which they continue to lose the plot. Starting by being mystified that the S W Guardian should think this is anything other than a 'commercial' decision...they then go on to say;

"It is true that, over the years, some of the editorial coverage in the Guardian has seemed to us to be biased and unbalanced.
"We are surprised that the newspaper has singled out a recent article as if it were an isolated incident.
"The truth is that this was but the latest in a long line of articles which we would feel did not present a full and honest picture"

So, actually it was because the paper dared to print a few articles mildly critical of the council, in between the local jumble sales and motoring offences. Nothing to do with 'commercial decisions'. This statement is astounding and the implications appalling.

Yet again, this does not sound like a statement from the press office nor does it sound like the words of council leader, Kevin Madge.
(Full BBC article here)

The Western Mail has also covered the story and adds a further chilling comment from County Hall;

“The county council has, in fact, made numerous complaints and had many discussions with the editor and senior figures with the paper. Unfortunately, despite our best efforts we have not managed to establish any kind of working relationship with the South Wales Guardian under Mr Lewis’s editorship.”

Oh dear, the truth is coming out now. Have they someone more 'appropriate' for the job in mind? Is that what it will take for the council to take the paper off the blacklist? I'm speechless.

Oh, also in the Guardian, the big Guardian and elsewhere.

--------------------------------------------------------------
The editor of the South Wales Guardian, Mike Lewis, has today come out fighting with a front page spread about the paper's ongoing row with Carmarthenshire Council. There is also an editorial piece and an article. I for one am very glad that this is now in the open, the council should be holding it's head in utter shame. It's now time that County Hall's tin pot dictators are stopped in their tracks. Well done to Mr Lewis for standing up to the bullying tactics of the county council.

The comment piece which Mr Lewis refers to, published in September, can be found here.

I have published all three articles below, all of which can be found on the South Wales Guardian website.

The South Wales Guardian has been subjected to a Carmarthenshire county council advertising blackout since September, following a comment piece criticising the authority.

Ironically, the revelation came on the day the council was being urged to show greater support for local newspapers.

In the wake of the Leveson report into media standards, county politicians called on the authority to abandon its own Carmarthenshire News publication – produced by council staff and costing taxpayers £148,000 – and help ensure “the vibrancy of the press”.

Meanwhile, council advertising in the Guardian has all but dried up since publication of an editorial lambasting the authority’s now notorious Sainsbury’s press release regarding the Welsh Assembly’s call-in of plans for stores in Llandeilo and Cross Hands. Council figures show that during eight weeks between September 27 and November 21, the authority spent £9,551.69 in the county’s three newspapers with just £224.99 or 2.3 per cent spent in the Guardian. The remaining 97.7% went to the Guardian’s two rivals.

In his report, Lord Justice Leveson noted with dismay the difficulties faced by local newspapers due to declining advertising revenue.

Plaid Cymru AM Rhodri Glyn Thomas said: “Local authorities have a duty not to undermine local newspapers and we’re calling on Carmarthenshire county council to join our campaign to secure the future of the local press in the county. The council should start by scrapping its own publication and direct advertisers to the independently-run publications in the county.

“Carmarthenshire has a much-respected local press and it is imperative it is able to act freely and report without fear or favour.”

Meanwhile, MP Jonathan Edwards said: “Lord Justice Leveson categorically states that local, high-quality and trusted newspapers are good for our communities, our identity and our democracy and play an important social role. It is imperative that local authorities play an active role in ensuring the vibrancy of the press.”

Carmarthenshire county council has not responded to requests for a response.

The Guardian’s lone stand against Carmarthenshire county council has been described by one political commentator as David v Goliath.

Yes, the odds are uneven but, in all honesty, we never wanted a fight.

Surely, in these times of austerity it is in the interests of everyone to pull together?

But County Hall’s response to our hard-hitting editorial of September 19 criticising their now-notorious Sainsbury’s press release was to pull all advertising - a move which has cost us around £9,000 - despite a full page right-to-reply.

To describe this as a third rate decision by a third-rate local authority would be an insult to all those hardworking frontline county council employees (many of whom are Guardian readers) who help keep our county up and running.

The Guardian has nothing but respect for them - but we do have a problem with a regime which acts like some Eastern bloc state from the 1960s.

The most depressing aspect of all this is that the council continues to spend thousands of pounds on two local papers from a rival group.

The Guardian, meanwhile, is punished for speaking its mind. I suspect that even people who don’t read or don’t particularly care for us will be alarmed by this sinister turn of events.

We cannot give in to this pressure, because when a local paper gives up its freedom to criticise, a key plank of local democracy has gone.

Should this be allowed to happen? That is the question all county councillors, regardless of their political colours, should be considering today.

Now is the time to stand up and be counted.

I can’t help wondering what that Amman Valley political legend Jim Griffiths – a fearless champion of the underdog and passionate supporter of free speech – would have made of all this.

He must be spinning in his grave

TO go public or maintain a dignified silence? That was the question confronting us last week in the face of the latest intimidatory tactics employed by Carmarthenshire county council.

Newspapers occasionally display an over-inflated sense of their own importance so, in going public on County Hall’s advertising boycott would we ourselves be guilty of navel-gazing?

In the end, the decision was effectively made for us. For a number of weeks now there has been mounting speculation about the Guardian’s relationship with County Hall – the odd tweet here and there, the occasional enquiry from a reader.

Then the story hit the blogosphere (the full sorry saga can be read on Y Cneifiwr) and, finally, attracted the attention of the national media.

So, in a sense, our hand was forced.Yet the fact a local business is suffering as a result of the county council’s actions surely constitutes news?

This unofficial advertising boycott was a direct response to our no-holds-barred editorial condemning a county council press release accusing Plaid politicians Jonathan Edwards and Rhodri Morgan of “deliberately sabotaging” Sainsbury’s Llandeilo planning application by getting it called-in by the Welsh Assembly.

We rightly anticipated repercussions, voiced our concerns to the county council’s press office - and have the e-mails to prove it. Sure enough, council leader Kevin Madge was duly reported to the Ombudsman.

The backlash against us was swift, but in striking back at the Guardian the council has scored an own goal.

The paper is still read my most people in its Amman Valley heartlands and, by not advertising local events, the council is effectively shooting itself in the foot 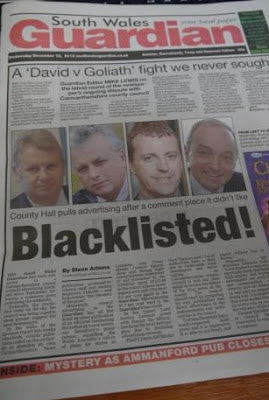 The 13 December press release is a full-on attack. Unhinged even by CCC press office's usual standards.

One of yesterday's other gems was "Two tonne of potatoes ordered for school Christmas dinners!" Read all about it (but only in English) at the CCC Media Centre.