Minutes of the Extraordinary meeting....and a birthday

The Minutes of the Extraordinary meeting of Carmarthenshire Council on the 27th February have now been published and can be found here.

I'm not going to comment further at the moment but as the votes for both the libel indemnity report and the votes of no confidence were recorded, here is a list of councillors who decided to spend even more of your money on legal advice to defend the indefensible and who refused to 'Accept' the auditor's findings;

These were the same forty-one councillors who also gave their vote of confidence to the three Exec Board councillors, Kevin Madge, Pam Palmer and Meryl Gravell who were complicit in the unlawful findings.

The 'forty-one' also includes Cllrs Madge, Palmer and Gravell of course, who were clearly never going to vote against themselves and their current respective salaries of £47,500, £31,120 and £28,780 plus expenses.

On a brighter note, I'd just like to say that today is the fifth birthday of this blog. Contrary to the views of County Hall officials, the purpose has always been to shed a little light on this surprisingly secretive and dictatorial little council. It's certainly had the occasional spotlight on it's activities, and even reached the world's stage from time to time. For all the wrong reasons.

A lot has been said about me over the past few weeks and months, all of which has achieved nothing other than give the appearance of an increasingly desperate council. I've made my views clear and stand by everything I've said, and everything I've written.

I shall carry on and I know one thing, I am still at my desk, and nothing I have been responsible for is currently being investigated by Gloucestershire Police. 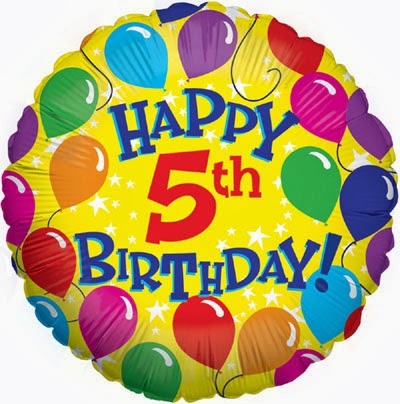 Congratulations Jacqui - you can rest assured that you have the heartfelt admiration and gratitude of the majority of Carmarthenshire residents for the way you have steadfastly continued reporting the true picture of what goes on in County Hall. I am in awe of your determination, bravery and integrity; I thank you most sincerely and wish you the very best of luck for the upcoming appeal.

Well said and well done! It may not always feel like it, but you have achieved a great deal.

We need people like you Jacquie - there are a lot of us behind you - more than CCC could imagine.

Well done Jacqui I think you will be remembered for the good service you have provided for the residents of Carmarthen which is a lot more than that shower in CCC have.

Many Happy Returns Jacqui. Your blog, along with Cneifiwr's, is providing the public with a genuinely critical eye on what goes on in County Hall, and there is much to criticise.
It's perhaps fitting that today, Margaret Hodge, Chairman of the Public Accounts Committee, has urged changes to promote transparency, one of which is the
extension of the Freedom of Information Act to apply to contracts with private providers. When respected figures like her are echoing what you've been saying for ages in respect of the likes of the Towy Community Church, you know that you are on the right side.

Obviously I too stupid here to understand this, so am in dire need of everyones help...
THE MINUTES

2. DECLARATIONS OF PERSONAL INTERESTS
The Legal Services Manager reminded Council of their obligations under the Code of Conduct for Members and referred in particular to paragraphs 8 and 10 thereof. He advised that members should approach matters with an open mind and then make a decision on its merits and in the public interest. He advised that should a member believe that they had a personal interest and that interest was also prejudicial they should not take part in the proceedings and it was for each member to consider their own position and form their own judgement on whether they complied with the code.

This is where i struggle... doesn't having a vote of no confindence against YOU, indicate you have an INTEREST????

Madge, Grav, palm.. where were their declarations?

Surely voting for yourself is a personal interest

Grateful thanks as ever for your comments and support, very much appreciated.

@Anon 09.45
It seemed mighty peculiar to me too why the three were allowed to take part in the No Confidence vote. I can only assume it must be above board. There has been an emphasis recently that it is up to the conscience of the individual councillor, presumably with advice from the monitoring Officer Linda Rees Jones, whether or not they should declare an interest, clearly these three felt there was no need..

Nope, votes of no confidence don't count for anything at all. The worst that can happen since the Tories changed the rules is that, for personal interests, there is no censure at all and for prejudicial interests it is only money that counts - if you benefit financially yourself and don't reveal it, that is a criminal act to be investigated by the police. Except mostly they don't investigate because they say they don't have the resources (make your own mind up on that one).