Update 26th September 2014; I have now made a complaint to the Information Commissioner

Back in May, the 12th to be exact, I made a Freedom of Information request to Gloucestershire Police for details of the criminal investigation relating to Carmarthenshire County Council.

The original Freedom of Information request was for;


1. The final report following the conclusion of the investigation
2. A list of any persons interviewed, and /or job titles, and whether any of these were interviewed under caution
3. Whether or not the CPS were involved and if so, any relevant correspondence.
4. Correspondence between Gloucestershire Constabulary and Carmarthenshire County Council
5. A list, or summary, of all documents in either paper or electronic form which formed part of the investigation.

I was subsequently informed that the investigation did not involve any correspondence with Carmarthenshire Council, nor did they speak to anyone at County Hall and there was no involvement with the Crown Prosecution Service.
In addition, the list of documents used in the investigation, and the final report was withheld. The full original response can be seen here (pdf)

On the 17th June I asked for an internal review of their response. I said;


Points 1 and 5 were considered to be exempt from disclosure. As I said in my request I would have been satisfied with a list of individual documents rather than the documents themselves. I would like you to review your decision and reconsider whether any/all disclosure is possible either in full or as a list.

As the investigation has concluded and no criminal findings were made, please also review your decision not to disclose the final report.

With reference to my whole request, this investigation involved two public bodies and I would like to add that transparency is of the utmost importance

The response to this review, another refusal, finally arrived this morning. It can be read in full here (pdf)

Far from deciding to release either the list of documents or the final report, further 'exemptions' have been applied and the initial exemptions revamped.

When considering whether or not to release information, a public body considers three steps; factors favouring disclosure, factors favouring non-disclosure and then it applies the public interest 'balance' test. In other words, it weighs up the pros, the cons.

The response to my original request used a Section 30 exemption which, to put it simply, decided that if the list of documents and the final report were released it might alert potential criminals to the manner of police investigations and there is a danger that they might reduce their offending to an undetectable level.
The 'balance' test was then applied and concluded that;


'To disclose the requested information would hinder the prevention and detection of crime and lead to criminals avoiding detection. It could also undermine the effectiveness of procedures used by other agencies to prosecute offenders'.

The response to the review, received today, states that in respect of this 'balance' test, 'some of the factors were not appropriate given the nature of the information requested'


Section 30 – Factors favouring disclosure
Disclosure of this information would provide the public with an awareness of how the Police Service undertakes investigations and enable them to satisfy themselves that an investigation has been thoroughly undertaken.

Disclosure under Freedom of Information is disclosure to the world at large and it is not in the public interest to allow the open dissemination of information relating to civil proceedings, which is not already in the public domain.

Balance test
The Police Service is charged with enforcing the law, preventing and detecting crime and protecting the communities we serve and there is a public interest in the transparency of policing operations to ensure investigations are conducted appropriately.

However, the Police are responsible for matters falling within the jurisdiction of the criminal law and it is firmly against the public interest for the Police to disclose information relating to civil proceedings in which the Police are not involved and have no responsibility in terms of the outcome.

Disclosure in relation to civil proceedings is subject to the procedures and rules of the Civil Courts and that function should not be potentially usurped by the Police.

Two further exemption have also been applied, Section 40 which concerns third party personal data (this does not require a public interest test) and Section 42, Legal Professional Privilege (LLP) which protects correspondence between a client and their lawyer. In this particular case, the public interest test failed and the LLP exemption succeeded. Quite who, or which body was claiming LLP I'm not sure.

What surprises me is the revised Section 30. What 'actual or potential' civil litigation proceedings are being referred to? The libel trial? Any future civil action by the Wales Audit Office? Something else? And what information, relating to any of these, is not already in the public domain? The response seems suggests that to release the information could jeopardize the outcome of civil litigation proceedings.

As for the answers to those questions, your guess is as good as mine. 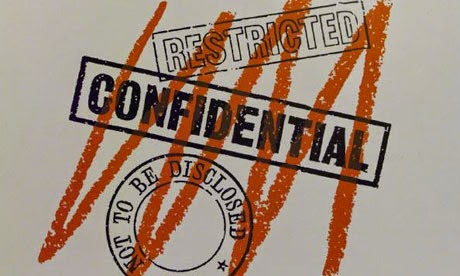 The full thread of the request and review can be read here and my earlier post on the subject, here.
Posted by caebrwyn at 12:20

One can often get copies of civil court records from the court itself upon payment of an appropriate fee.

However due to the fee, this is often the preserve of traditional media organisations.

I too have made FOI requests to police forces in the past and received similar replies initially and at internal review. I do think there's a culture in such organisations of keeping things secret.

The answer to your questions lie in the Contempt of Court Act 1981 in relation to "active" civil proceedings.

However there is a caveat in the contempt of court act in s. 5 for "discussion of public affairs" which states "A publication made as or as part of a discussion in good faith of public affairs or other matters of general public interest is not to be treated as a contempt of court under the strict liability rule if the risk of impediment or prejudice to particular legal proceedings is merely incidental to the discussion."

However you could always contact the PCC for that area now we have a politician in charge of police or your own PCC!?

Could it be that the Police have shot themselves in the foot following there first answer.

I have been involved in many Police enquiries and I must admit that the reply that they didn't speak to anybody, didn't write to anybody and didn't involve Cps just doesn't sound right.

It is impossible that a competent enquiry can be conducted without speaking to someone, anyone !

Even when issuing a speeding ticket the officer has to either speak to a driver or write to him.

I think you should make a complaint to the Ipcc because it seems to me that either they are fibbing in the FIO disclosure or are incompetent in the enquiry itself.

I am involved in a similar situation in a different location (council wrongdoing and police silence) and your report could have been written by me.

In our case, we have had 7 changes of lead officer in 18 months. Some have retired (one after only a week on the case), two were civilians contracted-out for very short periods and one got promotion! None of them seem to have handed over to each other. As far as I can see, none of them progressed the case, they were just names to keep us quiet.

And our councillors and police officers meet continuously at "liaison" meetings and (usually male only) events ...

If more people knew just how bad things are there would be rioting on the streets.

Thank you for the feedback. Before I take this any further I still need to identify what exactly the civil proceedings referred to in the response are. I am in the process of attempting to do just that.
Without that information I cannot judge whether a challenge the s30 exemption is worthwhile.

Further information and/or constructive advice would be welcome.

I am, of course, still mystified as to how this investigation was carried out without the police communicating with those involved.

Does this fall within the remit of the Independent Police Complaints Commission?

To change the subject entirely I have just watched the debate in Pembs on the no confidence motions in the leader and chief executive.

That is what I call proper politics and holding to account. The leader and several cabinet members being called liers on multiple occasions by several members.

Balls or what - exactly what we need.

I think we should pay to have half a dozen mike stodarts cloned and moved to Carmarthen to help us out.

Carms Labour - take note this is what proper labour does not what you do !!!!

Anon 17:44
You haven't really changed the subject, its all part of the same sorry mess.

Yes, and at least Pembrokeshire have finally taken some drastic action to hold their chief executive to account even if it took a lengthy wrangle and the outlook is uncertain.

In addition, it should also be remembered that the information-holding body, in this case the police, can, and I'm sure have, consulted with third parties to which the requested information relates.

Although not exclusively, this would certainly mean CCC and/or individuals within CCC. Maybe it would also include the Wales Audit Office and anyone else involved.

However, the final decision over disclosure remained in the hands of the police. In this case, it appears that they have agreed that disclosure could prejudice civil proceedings which they themselves are not involved in.

This morning I had a lengthy conversation with the Disclosure Officer from Gloucestershire Police.
As all the information has been withheld, she was of course unable to help with any of my enquiries.