I'm sure next Wednesday you will be tuning in, in your thousands, to the first full Carmarthenshire Council meeting of the autumn term.

Unlike Pembrokeshire, where discontent abounds and extraordinary meetings have been convened, Carmarthenshire will attempt to pretend all is rosy, apart from the gaping hole in the finances of course.

It's up to the councillors of course, but one hopes that by now all will be aware of the opinion of the respected lay member of the audit committee. I'll be watching the webcast with interest.

One item of interest on the 'official' agenda concerns amendments to the constitution required by excitingly titled Local Authorities (Standing Orders)(Wales)(Amendment) Regulations 2014, Welsh Government legislation which came in to being on the 1st July.

From now on the level of pay, benefits in kind, pension top-ups etc to chief officers, or changes to those levels, will have to be approved by full council and any post with a salary of over £100,000 per year must be publicly advertised.

An internal interim appointment can still be made, but must last no longer than twelve months. For example, the informal 'arrangement' by which the current head of law and monitoring officer, Linda Rees Jones has been 'acting' since the summer of 2011 without Member involvement or approval will no longer be allowed.

The position should now be advertised and a suitable candidate appointed.

The current director of education was brought in from the ominous sounding 'special projects' department a couple of years ago without reference to anyone.

In another change, the almost insurmountable procedure for disciplinary action or dismissal of chief officers over alleged misconduct will now be extended to cover the post of head of democratic services.

The process involves the setting up of an investigative committee (cross-party, but Carmarthenshire's constitution allows it to be selected by the chief executive..), the committee chews over any allegations, writes reports and recommendations, then has to appoint an independent person to chew it over some more. The independent person then makes more recommendations and drafts reports. And that's just the start.

The reason given for the additional protection given to chief officers is that they "might be required to challenge the leadership of their Authority in the course of fulfilling their duties". It's not something I've noticed happening very often in Carmarthenshire, but the complicated procedure also means, of course, that they are extremely hard to get rid of, should the need ever arise.

Also slotted in to the amendments is the withdrawal from the chief executive (aka head of paid service) the power to appoint, discipline or dismiss either the Monitoring Officer or the head of democratic services. This is, according to the Welsh Government, to give the two postholders additional protection; presumably from any particularly over-powerful chief executives....or something like that.

Wednesday looks like quite a busy day in County Hall with a great deal of interim appointments and acting -up (in the employment sense at least) arrangements, all which will have to now be done under the new requirements and not within the exclusive confines of the presidential suite.

On the agenda is the appointment of the interim replacement for retiring director of resources, Roger Jones. The council has to have, by law, a chief finance officer (s151 officer), one statutory duty of that officer being "the duty to report any unlawful financial activity involving the authority (past, present or proposed)" so the current head of financial services, Mr Chris Moore will take on that busy, and clearly necessary role.

Mr Dave Gilbert, director of regeneration and deputy chief executive and all round man of action will take on some of the other duties of the director of resources.

As Mr Moore will have a 15% pay increase, under the new rules the pay rise will have to be approved by full council.

Two Appointment Committees meet in the afternoon. There's no sign of the fate of Ms Rees Jones but it looks like one of the two Assistant Chief Executive posts may be on the way out, and I should think so to.

We will have to make do with one Assistant CEO, and Deputy Gilbert of course. Mr Burns, one of the Assistants is off to run Caerphilly Council on an interim basis, so it is recommended that Ms Wendy Walters, head of economic development will 'act-up' to fill his shoes until such time as the post is possibly axed, or the twelve month limit is up.

Also in the interim (who knew this blogpost would use the word interim so often, the only 'interim' I've been thinking about is the interim charging order Mr James has on my home...link now corrected, ed), is the appointment of a temp director of social services. There is a gap of one month between the retirement of the current holder of the post, which is statutory, and the arrival back from Pembrokeshire of Mr Jake Morgan to take up the post permanently. The council's current head of children's services will 'act up' in the meantime.

What is quite refreshing is that prior to the new requirements, these arrangements, interim, acting or otherwise, would, as I said above, have been made quietly over a cup of Earl Grey in the presidential suite, without any reference to councillors at all, who, it should be remembered, are the employers.

As I said in the title though, it's an exercise in shuffling the deck and you can be quite certain that the dealer, the author of all these recommended arrangements, still holds all the aces.... 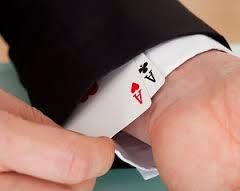 I'm getting old and cynical so can I see a way that senior council officials will be able to get around these 1 year/£100k rules really easily?

A new 12 month contract EVERY year as despite the post being adverised they will not be able to find anyone?