It's exactly a year ago today that the Wales Audit Office published the pension payment and libel indemnity public interest reports. The scandals were finally exposed.

Just to recap, short of having the Appointed Auditor quietly bumped-off, County Hall tried every trick in the book to stop the publication of the two reports. Weaselling reached new levels as the pension tax avoidance arrangement was rescinded without admitting unlawfulness and eventually the libel clause was suspended on the same basis.

Both the recipient of the payments, Mark James (totalling £57,000) and the idiots who rubber stamped it all were finally exposed, to put it in layman's terms, as scheming b*****ds. In other words, they had deliberately concealed the truth, and the unlawfulness, of their actions.

What is truly astonishing is that, a year on, they're all still there, unaccountable and as arrogant as ever  - one of them is trying his damnedest to milk another few hundred thousand out of the system to take with him, whilst overseeing the attempted repairs to council governance he was ultimately responsible for destroying in the first place.

What made the whole thing worse were the lengths, and expense, the council went to to defend themselves, and particularly to defend the chief executive. Had they accepted the auditors findings back in the summer of 2013, and with the usual application of council spin, likely as not the whole thing would have blown over in a fortnight.

Instead we had the pantomime of the extraordinary meeting and the lengthy engagement of Tim Kerr QC, who's fruitless services, we were told, cost £26,000; a necessary expenditure, said the council leader. Another £51,000 went to the Wales Audit Office for their work to produce the two reports.

Council resources, including the press office, were used by senior officials as a private reputation management fund to defend the indefensible.

The true financial cost will never be known. Twelve years of democratic damage is also difficult to quantify as is the endless generosity for the favoured rugby team or even the local evangelicals..

It is also likely that since September when the chief executive announced his application for severance lawyers will have been engaged to iron out a plan. I could be wrong of course and maybe Linda Rees Jones (still acting after all these years) and the finance officer came up with the 'ten options' for his departure...oh and emailed it to Mark of course for his final approval and/or editing...

What will now happen to the severance application remains to be seen, given that he could be forced to resign, but one issue which arose regarding severance was that Mr James wanted his pot of gold in the next tax year but, inconveniently, the severance scheme ended on the 31st March.

Lo and behold, what's on the agenda for Monday's Executive Board meeting? An extension of the severance scheme, All ready, no doubt, for that rubber stamp.

So it's Many Happy Returns to the WAO reports, or if you're the highest paid council chief exec in Wales, many happy tax returns. 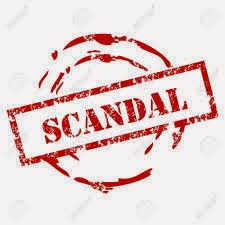 Cneifiwr and I have been asking the Monitoring Officer, Ms Rees-Jones, for copies of minutes of this meeting since before Christmas,
It is utterly outrageous that Cneifiwr had to resort to a Freedom of Information request to acquire them.
Posted by caebrwyn at 16:05

Lo and behold, what's on the agenda for Monday's Executive Board meeting? An extension of the severance scheme, All ready, no doubt, for that rubber stamp.

In a nutshell IT STINKS !!

Is it suggested that the extension of the severance scheme will apply to all county council employees - or just to one particular employee I wonder?

If Mr.James applied before any proposed changes then the April 2015 date should apply.
Also he should not take part in the meeting discussion due to his interest in the result.