Update 3rd November;
In the post below I said that in 2013, the unspent S106 funds languishing in the council's vaults stood at £1.5m. The figure, as of October 2015 is actually £3.5m which includes £1.3m for 'Recreation, open spaces and play schemes'.
Local clubs and organisations considering the 96 'asset transfers', particularly those situated near new developments, might want to ask why these funds have been allowed to accumulate and ensure that any monies due are handed over as part of the transfer deal.


The county council seems to be going full steam ahead with the next stage of it's Asset Transfer plans. Presented as 'putting local people in control of their amenities' the whole programme is merely shifting the costs to local town and community councils and other local organisations.

Day centres, luncheon clubs, public toilets (top secret) and sport grounds have either been offloaded or are in the process of being 'transferred' and now, an astonishing ninety-six parks and playgrounds are listed in a Public Notice as the council 'intends to dispose' of the rest of their open spaces.

Some of these transfers are currently ongoing but, with Carmarthenshire Council in charge, questionable land valuations and wrangles and mysteries over of land ownership mean lengthy, complex procedures. We also have the recent, less than savoury dealings over Parc Howard (also on the list) where the lease could have quietly passed to private hands, which hardly inspires confidence.

Even if transfers are successful in the short term, long term monitoring would be necessary to protect these public amenities, mostly children's playgrounds, for future generations. The attitude of the council seems to be that these are deadweight and best dumped elsewhere. 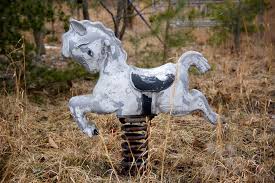 Out of all the local council assets up for transfer its odd that council run car parks never feature on the lists. Far too lucrative of course yet this could be a viable option to fund the parks, playgrounds etc that town council are now having to run.

Where local councils and clubs are unable to take over the responsibility and cost of these assets it is not clear what would happen, there appears to be a March 2017 deadline after which the land would, I suppose, be sold to the highest bidder.

With the chief executive currently 'incredibly excited' over the prospect of playing with millions of pounds of someone else's money to build yet another white elephant, your kids' park and the local rec is way down the list of priorities. I would suggest that those concerned about the future of their local open spaces, parks and playgrounds should respond to the notice (see below), or contact their local elected Members. If nothing else, any transfers need to be transparent and clear or local communities will be storing up trouble, and big bills, for years to come;

"Objections to the intended disposal must be made in writing and addressed to: Head of Corporate Property, Carmarthenshire County Council, Building 8, St David’s Park, Carmarthen, SA31 3HB by no later than 9th November 2015."

Have Plaid fallen into an elephant trap? This policy was probably planned entirely by Mark and Meryl but by approving it and, importantly implementing it Plaid will carry the can politically for it.
If Emlyn Dole gets retrospective planning permission for his wife's barns on Thursday Plaid's credibility will be completely destroyed!
There's surely a degree of entrapment in all this? No-one would put their necks into this noose unless fooled into it?

Anyone else think the notice may be going into the Western Mail because so few people read this paper in Carmarthenshire?

I know, lets sell off all our assets, starting with parks and playgrounds. After all, we can't exactly install 'playing meters' in them akin to carparks.

After that, we need to look what else we can sell. County Hall could be converted into executive apartments for the rich and famous. After all, given the glorious view of the Towy, the quiet peace of country living and its proximity to Harrods and Harvey Nichs (via the soon to be installed heliport) Russian oligarchs and Hollywood superstars will be outbidding one another. We will have more money than we know what to do with.

Alternatively, and back in the real world, we need to cap the salaries of the lunatics that run this asylum. I'm sure Caebrwyn will be able to put a figure on that for comparison purposes against real/genuine chief executives.

Additionally, I understand heads of departments are all receiving in excess of £100k per annum too. That too should be capped inline with national averages, or better still, inline with Carmarthenshire or Welsh average salaries. If these people are so great at their roles and feel they deserve better let them go somewhere that will pay them accordingly. Only not here.

So what are they going to do next year when all the cupboards are bare, there's nothing left to sell and the lunatics still want their extortionate remunerations? Yup, council taxes will be raised. Because after all, that will be the ONLY way they will be able to raise sufficient funds to cover the costs.

The writing is on the wall. Action is required, and urgently, to bring an end to this nonsense.

Councils are there to provide a service to residents. Its employees provide that service, but those in overall control view it as some kind of fiefdom where they can lord it over everyone they purportedly work for.

The chief executioner saw the writing on the wall some time ago and has been seeking employment elsewhere. Thankfully, or unfortunately, depending how you view it, his applications were unsuccessful. Maybe Bath university saw through him too. But the fact he wants to leave is testament to the above in my opinion.

Time for change. Only problem is how.

They work for us, surely we must call for change.