The Autumn term at County Hall kicks off next week with September's full council meeting, the agenda, for your information, is here. It includes a Motion and a couple of questions from the Labour benches over the proposed cuts to the education budget over the next three years. The planned cuts, amounting to £15m, nearly half of the total cuts to be made, were rubber stamped for consultation by the Executive Board back in July.

I daresay the responses will be to say that 'nothing's been decided', there'll be some cross-party blaming and accusations of scaremongering. We'll have to see what happens. Last year's planned school cuts were lessened after the council bean counters jiggled the council loan repayments to free up some cash, which was also just happened to be prior to the council elections...no such election this time round.

Meanwhile, the council press office, or 'Media and Marketing' department as it's now known, and which, as usual, remains largely unscathed from the worst of the cuts, has been busy putting together some spin. A video appeared over the summer rejoicing in the £250m spent on new schools and refurbishments. No doubt this is all very welcome, but what the message fails to convey is that this expenditure was over fifteen years and involved the closure of over 40 schools and decimated the heart of many rural communities. Building new schools is a false economy when the actual teaching budgets are being slashed, let alone spending precious resources on pointless spin.

Anyway, do tune in next Wednesday at 10am,
Link to meeting here. 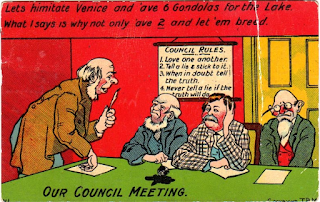 Also up next week is a meeting of the Licencing Committee where an application from Scarlets' Regional Ltd is being discussed. The application is to extend the sale of alcohol to the external area of the Parc Y Scarlets' stadium, ie some grassy areas and the car park, and to extend the hours to, well, all day, every day.

Regular readers will be aware of the controversies surrounding the development of the stadium and the ongoing cost to the taxpayers (same happened in Boston where the very same council chief executive had a similar 'vision') so I'll not repeat it again but a more recent controversy gives the application an ironic twist.

A couple of years ago a 'surplus' car park, owned by the club and the council was sold off to Marstons' Inns, planning irregularities were 'dealt with' and, thanks to the intervention of Mark James, the taxpayer ended up losing over £200,000. The details can be found on this blog, including here. Anyway, Marstons went on to build a pub and more recently a 27 bed hotel on the site...and are now the main objectors to Scarlets' Regional licensing plans, and as can be seen from the application, have put their strongly worded objections in the hands of their solicitors.

I mentioned, earlier this year that the council had managed to find £350k stuffed down the back of the corporate sofa (the precious revenue budget actually) for Llanelly House, the restored Georgian House and visitor attraction in Llanelli. The house is run by the Cambrian Heritage Regeneration Trust (CHRT) which is also supposed to be restoring the YMCA building in Merthyr. Further background to the CHRT can be found here on Jac o'the North's blog.

Clearly the trust were in difficulties and although the Executive Board decision was held in secret, Company House records show auditors' material concerns with the ongoing viability of the trust. In fact a couple of years ago Finance Wales refused to come up with any more cash and even the council changed it's mind about advancing a £200k loan. There are nine outstanding charges and, needless to say, a considerable amount of public money involved. The chief executive of the trust, who also acted as a consultant, resigned in December.

Companies House now shows that things were a lot worse and a few weeks after the council dished out £350,000, and the Lottery paid out £250,000 to fund a 'business review', the Trust called in the insolvency practitioners and entered a Company Voluntary Arrangement, a legally binding high court agreement to pay off its creditors.
CHRT's current status with the Charity Commission doesn't look too good either with the Trust having 'failed to provide information on its finances within 10 months of its financial year end'.

I wish the place every success and I'm sure that after such an expensive 'business review' it will be turning its fortunes around...but, given the precarious finances it would be interesting to know exactly what the terms of the £350k grant were, and what CHRT actually did with it. Given the council's stance on Parc Howard, maybe some of our councillors might like find out.

Finally, rather like the email snooping story, I am reminded of another Carmarthenshire saga from elsewhere in the UK. Public interest journalists at 853London report that Greenwich Council have threatened to withdraw advertising from a new weekly paper for publishing critical news stories. The article is well worth a read and of course no such story is complete without a link to Carmarthenshire's efforts to control the editorial freedom of the local press.

The link related to events in 2012 when advertising was withdrawn from the South Wales Guardian after a mildly critical article raising the concerns of Ammanford traders. The proof of the pudding appeared in a leaked email from the council press office. A subsequent Plaid motion (Oh how things have changed..) for full council to support the freedom of the local press was blocked by the chief executive...'Council Chief accused of gagging free speech' screamed the Plaid group...at the time.

There was, of course, more to it than that and council pressure on newspapers, or complaints to the corporate owners often had the desired effect. I provided a summary back in 2015. In another instance, a call from County Hall led to a reporter's freedom of information request concerning senior officers expenses being withdrawn. You can guess who was behind the call and who's expenses they were... The Mark James Media Empire also ensured that the council's press manager attended the duration of the libel trial in London. Despite this, there was much courtroom consternation amongst the other side on the last day when The Times published it's leader...

Another sinister threat, a sword of Damocles if you like, to any enthusiastic investigative reporters was the threat to sue for libel, unique to Carmarthenshire Council and enshrined in the constitution in 2008... and suspended due to being entirely illegal in 2014.

As time has moved on, the internet has proved to be one step ahead of Mr James; a quiet word, an invitation to lunch to new editors, or a fatuous complaint don't usually go unnoticed any more and become the story itself. A pop at the Herald when it was first published in Carmarthenshire resulted in a headline story which reached well out of county.

The council propaganda rag, the Carmarthenshire News is now down to two hard copies and two electronic editions a year. It is run by the council but funded by several other equally cash-strapped public bodies which make up the talking shop Public Service Board. According to the PSB the e-editions 'had not worked the way it was intended' (at cost unknown) and all was to be reviewed, with better use of existing social media a possible way forward. Yes, and cheaper.

In what appears to me to have been a desperate and last ditch attempt to have a go at the press, Mr James CBE went to the police to say I was harassing him by republishing critical articles, most notably from the Herald and Private Eye. In what can only be described as cowardice he never troubled the publications themselves, both of which would have had the means to put up a fight.
Fortunately the CPS decided he was a lost cause.
Posted by caebrwyn at 20:08

It really does show up Plaid Cymru for what they are - brave, fearless and decent in opposition but cowed, and subserviant to their public SERVANTS in "power"- I suppose the money makes up for everything ? :(

Since holding power in Carmarthenshire, Plid and their councillors have all shown themselves to be extremely weak, completely gutless and without a shred of competence in any of them. They are not worth 1% of the public money that they extract from, us in the form of ill-deserved allowances and expenses. They always complained of the incompetence of Labour councillors when they held power, but they have shown themselves to be far worse than Labour, completely scared of MJ and his cohorts - proving that nothing is impossible!

You hit the nail squarely on the head.
Plaid have been very disappointing to say the least.
It's all about Party Politics and not a care in the world about anything else.
I supported them at one time - now they disgust me.

When they were in opposition Plaid councillors I spoke with continually complained about Carmarthenshire being an officer-led council. "If they were in power things would be different"....... So, where's the difference?

There is an obvious difference - Plaid are now "in power" - or so they seem to tell us.
I just do not believe in Fairy Tales.

And Labour were very strong werent they ?

Plaid will go the way of the Lib Dems if they don't show their teeth. It's one thing to show strength in opposition, that's the easy bit. The tough bit is to stay strong when in power. Plaid are overtly displaying weakness. Sink or swim.

The council's attitude to CHRT is that of a gambler on a losing streak, chasing his losses, believing that the next bet will turn everything round. It very rarely does.