Interesting report from Ireland where a government minister is repaying €16,000 she had received in unlawful payments. The money was an extra allowance which was eventually deemed ineligible and she has agreed to hand the money back to the public purse at €1000 a month. Whether it was a deliberate attempt to deceive, or not, seems debatable. 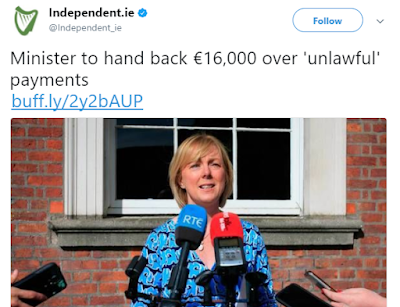 Compare that to Wales, and Carmarthenshire where the council chief executive took £60,000 in unlawful payments and refused to hand any of it back. And that was very deliberate. And no pressure from Welsh Government to pay it back either.

Regular readers will be aware of the 2014 Wales Audit Office findings so I'll not go over it all again, but half of it was the pension tax avoidance payments, a scam Mr James shared with Bryn Parry Jones, former CEO of Pembrokeshire County Council. Jones left with a golden handshake, minus the pension cash which the Wales Audit Office insisted was deducted. Perhaps they'll do the same when Mr James goes...

The other half was the illegal libel counterclaim costs. With veiled threats to sue the council, Mr James, and his legal sidekick Linda Rees Jones also managed to avoid disciplinary action.
Earlier this summer, the BBC again highlighted the fact he's never repaid it;

Wales has a problem particular to Wales, in that it is a small country where all those in positions of power and influence either know each other or know of each other. This gives rise to a reluctance to challenge serious wrongdoing. In turn this compounds the belief by those committing wrongdoings that they are safe from any form of formal investigation.