Caebrwyn - In this week's Carmarthenshire Herald 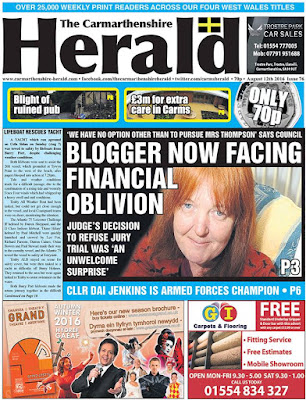 As you can see from the front page, this week's Carmarthenshire Herald carries a couple of articles relating to Caebrwyn.
This opinion piece below which considers the current involvement of Dyfed Powys Police, is well worth a read, see also my previous post, Police investigation - where's it heading? which is now updated, and includes comments.

There is also a full report on recent, and not so recent matters relating to Caebrwyn, here;

The council has responded to a couple of questions put to them by the Herald...well, I say responded, a question concerning the (still) ongoing police investigation and whether the council were concerned that they themselves might appear 'excessively hostile to criticism' was quietly ignored.

In what appears to be a novel concept for our senior officials in County Hall, the council informs the Herald that it has a 'responsibility' to the taxpayer to recover the money.
Of course, had my name been Mrs Scarlets Regional Ltd, or Pastor Thompson of the Church of the Literal Word things might have been different. And anyway, as I have mentioned before, an early settlement had been on the cards until the opportunity arose for Mr James to be unlawfully bankrolled to bring the counterclaim.
I can only wonder at the mounting cost to the taxpayer of Mr James' very lengthy involvement of the police. I'm sure they must have better things to do than this...

In the opinion piece above, Matthew Paul quotes the words of the former Dyfed Powys Police and Crime Commissioner;


"It was not Jacqui Thompson, but the outgoing Police and Crime Commissioner Chris Salmon who very publicly described Carmarthenshire Council as being “Wales’ answer to a Sicilian cartel. It’s everywhere you look (thankfully only in Carmarthenshire – so far as I can tell). It extracts vast amounts of money from residents which it showers on favourites, hordes property, bullies opponents, co-opts friends and answers to no one, least of all local councillors.”"

Oddly there's still not a whisper about recovering the £41,000 unlawful counterclaim costs, yet. Perhaps they're reluctant to raise those scandalous skeletons in court, or at least until a few key players have departed.

They also state that the question of whether or not I have the means to pay £190,390 (plus Mr James' £30k+) will be 'something for the court to consider', despite already placing an interim charge on my home. Perhaps Mr James could pass his newly gleaned information on to his colleagues and let them know that although I have an elderly microwave, I don't have a video player or a dishwasher. Nor £220,000.

Update 17th August
Re previous post;
I have been informed by the chief constable's PA, via email, that I will receive a "full response" to my letter in "six weeks' time".
Obviously the letter from the chief constable (reproduced in my previous post) was not a full response, so what exactly is going to take another six weeks is anyone's guess...
The situation is becoming beyond ridiculous.
Posted by caebrwyn at 21:31

The timing makes me wonder. Isn't there a by election due? BTW Plaid have IMO proved to be worse than the previous administration. Why have they knowingly allowed this not only to continue but get worse. Typical turncoats too IMO.
Local elections next year might start sorting out the wheat from the chaff. We can all only hope.

You should be getting a Damehood Jacquie for your services to the truth about CCC.