Update 22nd August 2016 - Pleased to confirm that my nomination papers have been accepted and I am now a candidate for this by-election.
Vote for Jacqui Thompson!

A by-election is on the cards for the County Council seat of Cilycwm. The vacancy has arisen following the death of the sitting councillor and the first Notice has been published to request an election.

The 2012 local election result for Cilycwm was;

I will definitely be dropping a line to Mr James to request an election..... 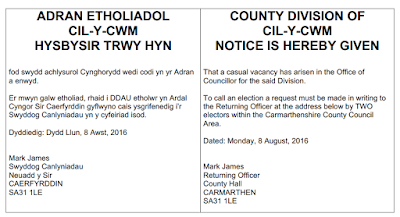 The next local council elections across Wales will be held in May next year.

The idea that there could be a chance of you becoming a County Councillor will not please the CEO or Executive who have tried everything underhand they could think of to silence you! They'll be all out now to bankrupt you so you'll not be able to stand for the seat plus you'd have to stop being a Community Councillor. Imagine two redheads who speak their minds; who'd not allow themselves to be coerced; what a nightmare for all those who want an easy life or to climb up the ladder to an ever greater share from the TROUGH (public purse) without ever having to worry about the public interest. The very few who now speak out periodically are quite enough for the Executive,CEO with the help of the monitoring officer (who knew which side her bread was buttered on)to deal with. More dissenting voices would/could (heaven forbid)put pay to the toxic culture established over quite a few years. All I can say is "Go for it if you possibly can & good luck if you do take on the baton".

I haven't quite decided whether to stand or not yet, I'll decide nearer the time given the current pressure I'm under, but we definitely need an election here.
One thing I do know is that this area desperately needs decent, truly independent representation, a different style of councillor, and I'm sure others will throw their hat in the ring.
As for any nonsense about trying to prevent me from standing, I can't see that happening - it would just be silly. There will be another election in May of course and some of the old guard will be standing down, and you never know, the CEO might join them.

Good conscience demands that you MUST stand. The look on Mark James's mush when you ask your first question would be worth paying to see. Tell him he can flog tickets to it to help pay off his bloody charge over your home!